Meet the educator who has spent his 25-year career in Oberlin High School’s Room 200, sharing his passion for the stories of history that spark something in his students. Hailing from Oberlin, Ohio, veteran history teacher Kurt Russell reflects on growing up in the same community he now teaches in.

Russell remembers that back in the 1970s and 1980s, every home, barber shop, church, school, and office he ever encountered as a child had three portraits posted on the wall—Dr. Martin Luther King, Jr., President John F. Kennedy, and Jesus. While he was already especially familiar with Jesus from his time in the church, the other two portraits stuck with him. He vividly recalls opening a set of encyclopedias that his parents purchased and reading as much as he could about these two leaders. At the end of the excerpts for each profile were the words, “see also” with suggestions on other relevant entries. This led him down the path of making connections across history at an early age and down a rabbit hole that piqued his curiosity and passion for history.

In an interview with Dr. Monique M. Chism, Under Secretary for Education at the Smithsonian, Russell described history as a subject area that celebrates connection and storytelling. Whether it’s the celebration or struggles of a people, history helps us learn about the ways our nation and the world have developed ideas and solved problems. History allows us to make relevant connections to our own lives.

His enthusiasm for teaching history was palpable as he described the way his students “renew” and “rejuvenate” him, motivating him to return to the classroom each year. New students bring new energy and new voices, voices that Russell centers as he plans his lessons. Russell welcomes when his students influence the arc of his classes, even feeling joy when his students’ interests make classes go differently than he had anticipated. Russell finds strength and passion in the bright eyes and willingness to learn in each student.

His courses are dynamic experiences in which student voice and opinion is highly encouraged. Part of Russell’s teaching philosophy emphasizes the fact that the ideas and knowledge that students bring to the classroom is equally as important as what he has prepared to teach them. This philosophy creates a safe space for his students to learn, discuss, and connect with the material, creating classrooms that “bubble with conversation.”

Russell applies the same creativity and open-mindedness from his teaching style to the curriculum he develops. He often takes his classes to visit their local art museum when the exhibits reflect what they are learning about, once visiting to see the art of the Harlem Renaissance with his African American History class. Another time, Russell invited his students to highlight a particular person and their story from the Library of Congress’ Slave Narrative collection to present to the class.

While history has traditionally been a subject area with white and male-dominated narratives, Russell takes an intentional approach to ensure that his courses focus on the contributions and achievements of leaders and everyday citizens from a wide range of backgrounds. Alongside his African American History class, he teaches courses in U.S. History, International Baccalaureate "History of the Americas," “Race, Gender, and Oppression,” and “Black Music and the African Diaspora.” His classroom is also adorned with quotes, from the likes of Shirley Chisholm, that serve as visible reminders for students of their own potential, motivating them to dream and believe in themselves.

He credits two of his grade-school teachers for modeling what an inclusive and intentional learning environment could look like—Ms. Toss and Mr. Thomas. Russell distinctly remembers a children’s picture book Ms. Toss, his Kindergarten teacher, read to the class, featuring none other than Dr. Martin Luther King, Jr., even before Martin Luther King Day was a national holiday. Russell started to make connections to the portrait that he saw, the encyclopedia article he read, and now, the picture book that Ms. Toss had shared with the class that this leader was important and would play a pivotal role in his life’s work. A few years later, Russell had the experience of seeing himself reflected in the classroom, through Mr. Thomas, his 8th grade math teacher. To this day, he remembers the feeling of being taught by his first African American male teacher and the effects that this representation had on him.

Russell’s main priorities as National Teacher of the Year are inspired by the lessons he has learned both as a student and a teacher. Equity and representation are central to what he believes education should and can be. He believes in a more expansive definition of representation, calling for more women in Science, Technology, Engineering, and Math and more male teachers in early education, and more teachers of color in the classroom. He believes that the inequities in funding and resources between schools in our country are hindering the growth and potential of students, naming athletics and the arts as particularly affected. Simply put, he believes “all kids deserve the same opportunities.”

He’s excited for the chance to learn from and connect with educators across the country. In fact, when asked what he would want to tell the thousands of great teachers around the country, Russell emphasized his regard for both his own teachers and all teachers in general. He explained the impact that teaching has, describing how almost anyone around the country and around the world can remember their favorite teacher or a teacher who they looked up to or who taught them something that really excited them. Russell named teachers as experts, having worked hard and been well-trained in their subjects. He next called them valued and finally he described them as an inspiration.

As the school year comes to a close, Russell will embark on a journey serving as the National Teacher of the Year. Russell is sharing his message of equity and representation in our nation’s schools with the teachers he deeply values and respects, like we all should.

Editor's Note: Join 2022 National Teacher of the Year, Kurt Russell, at the Smithsonian's National Education Summit on July 27-28, 2022, where he will deliver the Keynote address. More information is available here: https://s.si.edu/EducationSummit2022 Ashley Naranjo is a museum educator, specializing in the use of digital resources for teaching and learning. She currently manages distance learning initiatives and education partnerships in the Smithsonian’s Office of the Under Secretary for Education. She has developed and implemented professional development opportunities for teachers, librarians and fellow museum educators since 2011. She holds a B.A. in Human Development from the Lynch School of Education at Boston College and a M.Ed. in Learning Design and Technology from the Rossier School of Education at the University of Southern California. She is a 2019 graduate of the Getty Leadership Institute’s NextGen of Museum Leaders program. 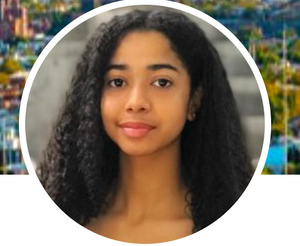 Isabella Lashley is a 2022 Claudine K. Brown Intern for the Office of the Under Secretary for Education supporting education outreach. She holds a personal mission of increasing representation in museums, along with interests in diversity, equity, and inclusion in art and international relations. In fall 2022, she will be an incoming college freshman at Harvard University.