The nation kicked off 2021 with a whirlwind of polarizing events that shook our country to its core. In the midst of a controversial presidential transition and insurrection of our nation’s Capitol Building, the sounds of young voices provided a moment of pause and reflection around the world. Twenty-two year-old American poet, Amanda Gorman spoke words of hope into the ears of millions during the Presidential Inauguration, while young activists Chelsea Miller and Nialah Edari of Freedom March NYC continued their work to push one of the largest youth-led civil rights movements on the East Coast. They are successors of young advocates and leaders throughout American history like teenage suffragist Mabel Ping-Hua Lee and civil rights hero 15 year-old Claudette Colvin who is acknowledged as a precursor to Rosa Parks.

Although our nation has repeatedly witnessed young leaders direct social change over the last few decades, Smithsonian educators are dedicated to further amplifying the voices of teens around the world. How do we as educators support our young leaders’ efforts without disrupting their individual agency? Here are four questions to consider as you work towards boosting and sustaining teen voices.

How do I leverage community building in my education space to activate teen voices?

Sixteen-year-old Letisha and Kaylani make an afterschool visit to the Hirshhorn Museum and Sculpture Garden’s digital art studio for teens, ARTLAB. While being introduced to the studio by a long-time ARTLAB participant, Letisha and Kaylani encounter a group of six teens freestyle dancing. One of the dancers notices them watching bashfully, and responds by inviting the two to join in. Letisha hesitates initially, makes eye contact with Kaylani for approval, and later jumps into the circle to join the dancers. The sound of cheers and affirming chants from Kaylani and the dance group fill the studio. “I think I found my new home!” Letisha exclaims to Kaylani with exhaustion after engaging in the excitement.

Before teens can fully actualize their individual agency, they must first find a community where they feel accepted. Creating spaces that offer teens like Letisha and Kaylani a strong sense of belonging, prompts feelings of pride and ownership over that community. In an effort to sustain the well-being of that community, our teens will establish skills in civic participation which are translatable when facing social issues that impact their world. By viewing your education space as a microcosm of the world in which our teens live, you will recognize the power that exists in your learning environment to motivate our youth to use their voices.

Japanese cultural anthropologist Mimi Ito coined the experiential learning theory, Hang Out, Mess Around, Geek Out, better known as “HOMAGO “. Her theory challenges us to reimagine our teens’ engagements with new media as a potential launching pad for establishing interests in media and technological fields. A teen taking a selfie during class time and later adding unique filters for posting on social media may seem frivolous on the surface. Through HOMAGO however, this action is viewed as a fundamental exercise of skills in digital photography and photo editing.

The most crucial component of HOMAGO is the self-directed creative exploration it offers youth. At ARTLAB, artist educators use HOMAGO to encourage teen participants to initiate a learning journey based on their personal interests. Eighteen year-old Daveon, for example, entered the "geek out" phase by successfully completing one of ARTLAB's film production internship programs. He later established himself as the studio's self-proclaimed Lead Videographer. In fact, Daveon began voluntarily offering video training support to peers who held similar interests, and consistently pitched new ideas to staff members in hopes of joining another ARTLAB video production internship program. His newly found leadership skills demonstrate the type of confidence and agency necessary for civic participation. Teen participants like Daveon have showcased the magic of combining their skills and interests in collaborative music videos like this one.

How do I have authentic conversations with teens about what’s going on in the world?

Finding the time and space to engage in difficult discussions with teens about current events is important. Doing so can help teens sort fact from fiction and learn to feel comfortable asking questions. More importantly, it can support their civic development by validating their experiences and valuing their perspectives. Designing discussions around compelling and normative questions can hook students’ interest. Through programs like the National Museum of American History’s National Youth Summits, we pose questions that connect to their lives, can be explored through history, and prompt intellectual thought. Last year, the Summit asked teens nationwide: How can young Americans create a more equitable nation?

We emphasize the importance of engaging in cross-experiential discussions. Creating space to examine public issues with peers from different lived experiences can break down perceived divisions between groups and foster empathy, while encouraging critical reflection of one’s own deeply held beliefs. Dialogue can also be bolstered through creative facilitation. Simple changes like playing a game can create shared understandings and mitigate biases. The museum’s American Experiments resources provide examples of creative discussion structures.

How can I encourage teens to know that their voices matter in the face of complex and globally significant issues?

Sharing stories of teens who have been part of similar or connected moments in the past is a good place to start. Talking about teen history helps young people see themselves as part of our nation’s story. Exploring these histories can also prompt teens to reflect on their own experiences and perceived agency, and to see their generation as part of an ongoing legacy of young people wielding serious political power.

Teens are often underrepresented in textbook versions of history which can obscure the vital role they have played in shaping our nation. Claudette Colvin. Anna Dickinson. The Wide Awakes. Jose Angel Gutierrez. Khmer Girls in Action. These are a small sample of stories of teens who have seen themselves as part of a larger democracy and their ability to affect it – embracing their civic agency. History is a powerful tool for inspiring us all to be present and active as members of our communities and democracy.

We’ll leave you with a challenge: Think Big. The teens you are working with and caring for may have gone through life changing experiences in this past year. They may be envisioning radical new futures that are more equitable and just. They may simply need to unload big emotions and find support among peers new and familiar. In turn, it is on us (as educators, caregivers and mentors) to be open to bold new ways of supporting teens as they choose to engage in public issues and civic life.

Through the National Youth Summit, we provide teens with a national and public forum to engage in difficult discussions. At the Hirshhorn Museum, ARTLAB teen art is displayed in public galleries and their ideas are now shared with millions. What can you do to elevate the voices of teens in a big way in your community? Abby Pfisterer is an Education Specialist at the Smithsonian's National Museum of American History. She leads the development of resources and programs that use history to foster civic learning and engagement among K-12 students nationwide. She has over ten years of experience working in formal classroom and informal learning settings at museums and historic sites, focusing on progressive education and audience-driven program development. Ms. Pfisterer holds degrees in History, Political Science and Education from Colorado State University and a Master’s degree in Business Administration from the University of Massachusetts. She has also held secondary social studies education licensure, teaching in middle and high school social studies classrooms in Greeley and Fort Collins, Colorado. 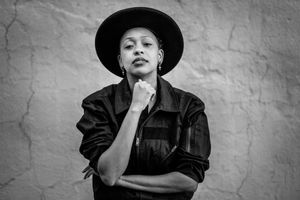 OnRaé LaTeal Watkins is a creative arts education consultant and public programs specialist holding nine years of experience in out-of-school programming. As the former Senior Manager of the Hirshhorn Museum and Sculpture Garden’s digital art studio for teens, ARTLAB, she supports the Smithsonian Institution’s efforts to offer racially inclusive and diverse programs. OnRaé is currently assisting the Arts and Industries Building as Programming and Community Engagement Lead and the Smithsonian’s Our Shared Future: Reckoning with Our Racial Past initiative as Education Coordinator. She is also the founder of two DC-based grassroots programs rooted in the arts, technology, and racial and gender equity including the  Black Girls Handgames Project, and Freedom Futures Collective.

"We Are Here" Introduces Readers to 30 Inspiring Profiles