Many ancient cultures tell tales of why the sun shines during the day and the moon at night. In some stories the sun and the moon are siblings, in others they are lovers. According to a traditional narrative from the Kumeyaay, a Native community in Southern California and Baja California, they were nearly spouses before taking advice from two frogs in love.

Kumeyaay educator Stan Rodriguez shared this story—or a shortened “Kmart Bluelight Special” version of it, he said—during a session on preserving language through music at the 2016 Smithsonian Folklife Festival’s Sounds of California program. He sang the accompanying song as an example of vocal repetition, a key element to teaching language to children.

SmithsonianFolklife · Frogs in Love: A Kumeyaay Story and Song

A long time ago, the Sun and the Moon were going to get married. All the animals were going to the top of Kuuchamaa Mountain. There were these two frogs that were in love, and they waited for all the other animals to get out of sight. Then they came together and did what… people in love do.

After they were done, they were getting ready, and the woman, the female frog, she said her stomach was getting bigger and bigger and bigger. She didn’t know what to do, so she jumped into the water, and then she had all these pollywogs!

They said, “Oh no! Look what happened when we fell in love. We need to warn the Sun and the Moon.”

So they hopped up to the top of the mountain, and they told the Sun and the Moon, “You cannot get married!”

They said, “Sun, you are sacred. Moon, you are sacred. There is only one of you. But if you two come together, look what happened when we did it!” And they saw all those baby frogs swimming around in the pond.

They said, “Okay, you are right. If the sky is filled with Suns and Moons, it will be off balance.”

So the Sun and Moon, they decided that when the Sun is awake, the Moon will be asleep, and when the Moon wakes up, the Sun will go to sleep. And that’s why things are the way they are today. Except during the eclipses!

Does your culture have an origin story about the sun and the moon? 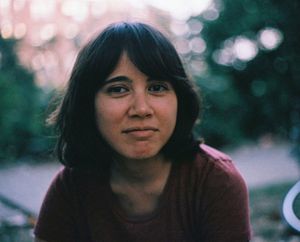 Elisa Hough is the editor and social media manager at the Smithsonian Center for Folklife and Cultural Heritage.