Some of my earliest childhood memories revolve around food, whether it was the fruit leather made from the plums grown in my grandparents’ garden, my mom delicately rolling cabbage leaves between her fingers to make dolma, or the gallons of homemade fig jam that neatly lined the floor of our garage.

I grew up in Los Angeles but was born in Iran to Armenian parents. During the Iran–Iraq War, my family relocated to Southern California as refugees, joining thousands of others from Iran who had taken the same path. As we left everything behind, pushed the reset button on life, and started all over in a new country, food became one of the constants in my life, defining my identity in ways I did not realize until I was much older.

The names of dishes I would rattle off if you asked me about Armenian food would differ widely from others of Armenian descent, depending on who you ask. An Armenian who hails from Lebanon, or one who grew up in the capital city of Yerevan, or even a third-generation Armenian American from Boston would all have different answers from me and from each other.

Armenian history and geography transcend today’s borders, but one of the reasons much of these differences in our modern-day cuisine exist is the Armenian Genocide of 1915, when over one million were systematically killed by the Ottoman government, while hundreds of thousands were displaced. This resulted in a global diaspora, as survivors left their homeland to find refuge across the world. Many came to the United States, settling in cities like Fresno, Los Angeles, and Detroit, as well as across New England. Some went to Europe, and still others escaped to countries in which Armenians already had a longstanding presence, including Syria, Lebanon, Palestine, and Iran.

Armenians both borrowed from and contributed to the culinary lexicons of these regions. The ingredients, methods, and dishes that define Armenian cuisine and identity might vary, but our stories converge into a meaningful narrative involving nostalgia, survival, resilience, and how food became a tangible inheritance for a people tragically forced to scatter all over the world.

“The food reminds us of what once was, the taste of longing,” Syrian Armenian chef Anto Kilislian says.

Kilislian encapsulates that culinary inheritance and passion both in what he says and what he makes.

A descendent of genocide survivors from Sassoun and Kilis (hence his last name), Kilislian was born in Aleppo among a robust Armenian community known for, among other things, their bakeries. His grandfather and father opened a small restaurant in Aleppo, and he eventually joined them. But the Syrian Civil War, which began in 2011, made life extremely difficult. The Kilislian family had no electricity or water, and by 2014 they decided to leave Aleppo for Yerevan, Armenia. They joined over 10,000 Syrian Armenian refugees who made the trek in those years as the war raged on.

Kilislian and his family opened Abu Hagop, named after their grandfather, and became part of the restaurateurs, cooks, and chefs who injected the local food scene in Armenia with much-welcomed, distinctive dishes and flavors of their native Syria. They brought lahmajoun, a popular open-faced meat pie, and doshka, a dish created by Armenian chefs in Syria consisting of bread, soujoukh (a spicy beef sausage), cheese, and more bread on top.

In May 2018, leading up to that summer’s Smithsonian Folklife Festival featuring food and craft traditions from Armenia, Kilislian had a chance to recreate these dishes in Washington, D.C. He was a guest chef at Maydan, the nationally acclaimed and recently Michelin-starred restaurant showcasing cuisines of the Middle East, North Africa, and the Caucasus.

“To see this insane mix of both cuisines together is everything that we love and everything that we’re interested in as far as this food is concerned, because so many of the dishes that we cook here come from all over the place.”

As Kilislian brought the many elements of his upbringing and culinary craft to Maydan, he spoke poetically about the infinite possibilities when collaborating in atmospheres like this.

“I was telling Gerald the other day, the kitchen is like a sea,” Kilislian says. “You learn something new every day, from kitchens around the world.”

Kilislian traveled to D.C. again that summer to participate in the Folklife Festival. I did too, working as a presenter in the demonstration kitchen and narrative stage. For those two weeks, the National Mall became a place where this melding of cultures yet instinctual commonality came out to play again, even when it was behind the scenes.

In the first few minutes of meeting, Kilislian and I were accidentally thrown into a precarious cooking scenario together, a real-life example of what it means to be part of a diaspora and then have those different parts come together.

In the Festival’s kitchen, we were tasked with making sou boreg, a cheese casserole dish. The recipe was provided by Armenian American chef Carrie Nahabedian, whose ancestral roots are in Sivas, a city which once had a strong Armenian presence before the genocide in Turkey.

Kilislian had never eaten nor even heard of sou boreg. I had only learned how to make it just a few weeks before, thanks to the Armenian Women’s Guild of St. John’s Church in Southfield, Michigan, which continues to be an invaluable guide in a journey I’ve taken to document food in the Armenian diaspora.

As we prepared for our joint cooking session, I showed Kilislian my sou boreg photos and videos with the guild. We watched it together, went over the steps, delegated tasks, and in a mad dash that involved lots of sweat, possibly a couple of tears, and Kilislian’s impeccable cooking skills, coordinated to make and assemble the sou boreg.

That day in the kitchen became, in many ways, what I believe is the essence of the Folklife Festival: a chance to interact and share the rich culinary knowledge we’ve both procured and had a hand in creating—not only with the public, but with each other. It was a way to become familiar again, after circumstances kept us apart for so many centuries, to embrace each other, make a dish, and realize that we have new opportunities to create together, once again. 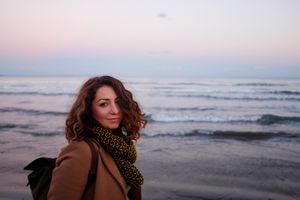 Liana Aghajanian is a journalist whose work has been published in the New York Times, BBC, Newsweek and The Guardian, among others. She participated as a food interpreter at the 2018 Smithsonian Folklife Festival. Her project Dining in Diaspora traces the culinary legacy of Armenians in America.

Fra Diavolo Is a Devilish Dish for an Italian American Christmas