On the 11th hour of the 11th day of the 11th month of 1918, the “war to end all wars” ended. While the United States honors all of its military veterans annually on November 11, this year is particularly special—it coincides with the 100th anniversary of Armistice Day and Remembrance Day (also known as Poppy Day)—holidays observed in Europe to commemorate the end of World War I and remember the members of the armed forces who died in the line of duty.

People honor lost loved ones in many ways. Some plant trees while others create shrines or sew quilts. Less often, an everyday object becomes a symbol to commemorate a collective loss. An ordinary plant became such a symbol one century ago.

The common poppy, Papaver rhoeas, is an annual plant in the Papaveraceae family. It produces seeds that can remain dormant in the soil for as long as 100 years. Since the seeds need light to grow, they only germinate in disturbed soils. Trench digging, bombs, and mass cemeteries decimated Europe’s landscape during World War I, causing millions of poppies to bloom on the disrupted soil. Imagine the contrast between the horrors of war and the beauty of red poppies blanketing the European countryside.

What we can only imagine now was once reality to Canadian Lieutenant Colonel John McCrae. In 1915, McCrae noticed poppies blooming on a battlefield in Belgium, inspiring him to write the war poem “In Flanders Fields.” The poem references the red poppies that grew over the graves of fallen soldiers:

In Flanders field the poppies blow
Between the crosses, row on row
That mark our place, and in the sky,
The larks, still bravely singing, fly,
Scarce heard amid the guns below.

We are the dead; short days ago
We lived, felt dawn, saw sunset glow,
Loved and were loved, and now we lie
In Flanders field

Take up our quarrel with the foe!
To you from failing hands we throw
The torch; be yours to hold it high!
If ye break faith with us who die
We shall not sleep, though poppies grow
In Flanders fields.

Not long after the publication of McCrae’s poem, Europeans and Americans alike wore silk and paper red poppies to commemorate those who lost their lives in World War I—a tradition that continues today on Armistice Day and Remembrance Day.

It might be challenging to see the same poppies that once bloomed on the environmental scars left behind in World War I. However, a number of natural history museums around the world care for dried plant specimens, including poppies, and make them available to the public.

The U.S. National Herbarium houses 66 specimens of the common poppy at the Smithsonian’s National Museum of Natural History. Nine of these specimens are available to view online in the Botany Specimen Catalog. The species is native to the Mediterranean region of Europe, North Africa, and temperate Asia. The Smithsonian’s specimens include poppies from their native habitats and the cultivated regions of North America, South America, and Australia. While none of these specimens date to World War I specifically, they cover periods stretching back to 1846. In doing so, they help scientists understand where the species grew through time and how it might have responded to habitat loss, herbicide usage, and climate change.

Whether they are blooming in Europe or preserved in museum collections, poppies symbolize the past. Sometimes, they preserve the memories of loved ones lost in a bitter war 100 years ago. Other times, they reveal Earth’s history. Despite their painful reminders, poppies teach us about the past so we can make our future—and Earth’s—better.

Related stories:
Check Out These Unexpected Connections in Natural and Presidential History
Are Pressed Plants Windows Into World History? 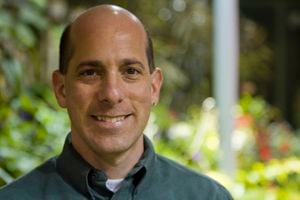 Gary Krupnick is a research scientist at the Smithsonian’s National Museum of Natural History, where he heads the Plant Conservation Unit. He studies plant conservation biology, the use of herbarium specimens to determine rarity and endangerment of plant species, plant reproduction, and plant-pollinator interactions. He has conducted conservation assessments of the flora of Hawaii and the flora of the West Indies. Gary serves on the steering committees of the North American Orchid Conservation Center and the North American Pollinator Protection Campaign. He is the co-editor of the book Plant Conservation: A Natural History Approach (University of Chicago Press; 2005), and serves as the editor of The Plant Press (newsletter of the U.S. National Herbarium).