What if you tried to write the American story using only half the alphabet? Even if you could include a few more letters--the important ones, the most visible ones or some that haven't been given their due--you'd be hard-pressed to capture what happened.

We are surrounded by American narratives that routinely miss the contributions of half the population—women—or at best highlight a few groundbreaking, exceptional cases.

Why settle for half the nation's history?

With a mandate to tell the American story inclusively, accurately and vividly, the Smithsonian launched the American Women's History Initiative in 2018.

"Representation matters," said Dorothy Moss, National Portrait Gallery curator of painting and sculpture and one of the coordinating curators for the initiative. "When people see themselves in another's story, a deep experience of connection, inspiration and empowerment emerges. From little five-year-old Parker Curry looking up to Michelle Obama's portrait to Henrietta Lacks' great-granddaughter seeing her story recognized for the first time alongside America's presidents, young people see their own future on the walls of our museums."

The initiative will transform our nation's understanding of its past, reinvigorating the textbook version of America by elevating women's history and enriching and completing the stories Americans repeat.

A 2016 Congressional Commission headed by Jane Abraham, now a member of the initiative's advisory committee, acknowledged that, "There are so many stories, from so many perspectives, that are missing from our current narrative." The commission's conclusion that the Smithsonian is the natural place to honor women's contributions prompted the institution to establish the American Women's History Initiative--Because of Her Story. Events like the Women's March, #MeToo and the election of so many women to Congress make the work especially timely.

Through the initiative, the Smithsonian is making plans to collect and exhibit more objects related to women; conserve and care for these objects; offer relevant public programs; sponsor digital projects and establish paid internships.

Provost John Davis is co-director of the initiative along with Stephanie Stebich, who is also The Margaret and Terry Stent Director of the Smithsonian American Art Museum. Working in concert, the two "began with our biggest, boldest move--funding six new curatorial positions that will focus on the important contributions of American women represented in our history, art and science museums as well as research centers," Davis said.

Stebich explained the importance of this move. "Making these changes incites changes throughout the Smithsonian and the nation," she said. "We play a key role in preserving the past, which frames conversations for the future."

Davis is especially excited about reaching people beyond the Smithsonian's museums in Washington, D.C., and New York City. "Our work is on-site and online," he said. "We want to take the riches of the Smithsonian across the digital airwaves."

The initiative's website is a first step in establishing a robust digital presence. Another is a new digital project, a virtual incubator that will "invite the public, especially young citizen historians, to plumb our archives for stories about women that have not been told," Davis said.

How to Be a Scientist is an online partnership between the National Museum of Natural History and the Smithsonian Astrophysical Observatory. "The fruit of this collaboration's research--a digital exhibition of Smithsonian women scientists--will go directly to the web to reach visitors beyond our 30 million 'real-time' guests," he continued.

Write Our Names in History

The first two supported exhibitions—one running currently and one opening in 2020—honor both the everyday and the extraordinary. Votes for Women: A Portrait of Persistence at the National Portrait Gallery hails heroic suffragists like Elizabeth Cady Stanton, Susan B. Anthony and Mary Church Terrell. Along with a fall symposium, the exhibition documents uncelebrated women who marched, published newspapers and even went on hunger strikes.

"Women's suffrage is one of the longest reform movements in American history, yet it hasn't gotten its due," said Kate Clarke Lemay, curator of the exhibition, a National Portrait Gallery historian and coordinating curator for the initiative. "The archives are largely absent of women, women of color and women in general from this era. We have the potential to truly change how people approach history, recognizing women are important in history. Women are history."

Girlhood! (It's Complicated), to open in 2020 at the National Museum of American History, will give voice to girls making historical change, from Helen Keller to Dominique Dawes, known as "Awesome Dawesome." One of the "Magnificent Seven," who won gold medals in gymnastics during the 1996 Summer Olympics, Dawes was the first African American female gymnast to win an individual medal. After an 18-month run, the exhibition will tour the country.

"The American Women's History Initiative is helping us shine a light on all the work that curators around the institution and even our foremothers have been doing, especially in the last 20 years, and making it part and parcel of what the Smithsonian does," said Kathleen Franz, chair and curator of the Division of Work and Industry at the National Museum of American History.

A Story Through Objects

In October 2019, Smithsonian Books will release Smithsonian American Women, a full-color book presenting 280 objects and artifacts chosen by curators across the institution. Sally Ride's NASA flight suit will be represented, as will a solar system quilt made by Ellen Harding Baker in 1876, Vera Rubin's spectrograph for discovering stars and LEGO's Women of NASA, two of whom depict astronauts Ride and Mae Jemison.

"The impact of the book is not so much what it tells us about the Smithsonian, but how it shows who we are as a country through what we have collected," said Michelle Joan Wilkinson, a curator at the National Museum of African American History and Culture and a member of the coordinating committee for the initiative who serves on the editorial committee for the book. "This substantive and beautiful book will be available publicly for people to peruse or educators to use. It is a visual overview of how our nation has collected."

When the Smithsonian was founded in 1846, its mission—"the increase and diffusion of knowledge among men"—was radical because knowledge was often the purview of a select few. The Smithsonian has the opportunity to be an agent of change again through the American Women's History Initiative.

"We are particularly trying to reach women of color, students in middle school—where the early enthusiasm of school fades and girls start to lose ground—and college students, who are powerful agents of change," Stebich said.

This broad approach will ensure that no matter who you are, from any walk of life, you can come to the Smithsonian and find yourself. In the words of Mae Jemison, NASA astronaut-engineer and the first African American woman to travel in space: "The future never just happened. It was created."

Everything you read about in IMPACT is made possible in part thanks to support from lifelong learners like you. Donate today and power Smithsonian's mission to create and share knowledge with everyone, everywhere.

Want more stories about how the Smithsonian impacts your world? Join our community of curious, passionate knowledge-seekers from across the globe. 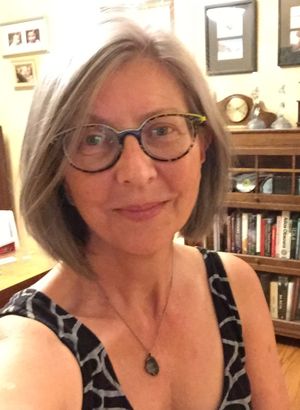 Mary Kay Zuravleff is a writer whose second novel, The Bowl Is Already
Broken, was inspired by her years at the Smithsonian.