An archives is home to thousands of secrets. The stories and memories found there help illuminate our nation’s most extraordinary events with stories that never make it to the headlines, but also reveal the beauty of everyday life and our most mundane triumphs. In the gallery we come face-to-face with a finished product, but the artist’s archive is where we discover what is hidden.

In Off the Beaten Path: A Road Trip through the Archives of American Art, on view through June 2 at the Archives of American Art’s Lawrence A. Fleishman Gallery, we go state by state to find out for ourselves the stories of some of the nation’s most iconic works of art. Today’s stop is Idaho, to the desolate landscape of the Minidoka Camp, where over 9,000 Japanese Americans were incarcerated during World War II. It serves as the backdrop to painter, performance artist, and printmaker Roger Shimomura’s (b.1939) performance piece, Seven Kabuki Plays, of which a typescript is found in the artist’s papers.

First premiered at the Crafton-Preyer Theatre at the University of Kansas in 1985, Seven Kabuki Plays brings to the stage the remarkable story of Toku Shimomura, the artist’s grandmother and a trained nurse and midwife who served as an important member of Seattle’s Japanese American community. She arrived in the United States in 1912 as one of the thousands picture brides who came to the country at the turn of the twentieth century, the result of arranged marriages between Japanese men who lived and worked overseas and women in Japan. On her journey to America, she began keeping a diary of her thoughts and experiences, a practice she continued almost daily for fifty-six years until her death in 1968. These diaries, which the Shimomura family meticulously saved, would go on to become the source material for Seven Kabuki Plays, as well as numerous other works by Roger Shimomura, including paintings from his Minidoka on My Mind, Diary, and An American Diary series.

The entries of Toku Shimomura’s diary paint a complex picture of her life before, during, and after being incarcerated at the Minidoka Camp. In this entry from December 12, 1941, just a few days after the Japanese attack on Pearl Harbor, she wrote,

I spent the whole day in the house. I hear that permission has been given today to withdraw one hundred dollars from the bank. This in order to preserve the lives and safety of us enemy aliens. I felt more than ever the generosity with which America treats us.

The historian Susan L. Smith notes the relative absence of emotional display in most of Toku’s entries in favor of an efficient and organized ordering of her thoughts and life, a common practice in Japanese diary writing of the period. However, through her entries we see a quiet resilience to the way she lived her life, what the Japanese call gaman, the act of enduring the seemingly unbearable with patience and dignity. Take for example this entry, translated by Franklin Odo, from April 28, 1942, the day Toku was sent to the Puyallup fairgrounds in Washington State to be detained and processed before being sent to Camp Minidoka:

The rain cleared up since last night. At last the day has arrived. It is time to leave Seattle, the city where we have lived for such a long time. During the morning Tsuboi san borrowed an automobile to come to some to see us. Rikio also came by automobile to help. Yoichi and Fumi came. In this fashion it was a merry departure for our journey. Even though I tried not to cry, the tears flowed. Our group of 370 working people departed at 9:30 in a long string of cars and buses. We arrived at Pallyup at 11:30. We settled into our assigned place; A-2, Apt. 27. At 3 p.m. we received another physical examination and smallpox vaccinations. We all felt dissatisfied with our army cots and cotton mattresses. Until late at night we heard a mixture of hammering and the crying voices of children. With some difficulty I finally fell asleep. . . .

Midwives, or samba as they are known in Japanese, like Toku were integral to community care and survival for the prisoners of the camps. While babies were forced to be delivered in the War Relocation Authority hospital—the civilian agency tasked by the federal government to oversee the operation of incarceration camps like Minidoka—Toku provided pre- and post-natal care, as well as helped to care for the infirm and provided comfort to those who grieved. While trained as a nurse at a western hospital in Japan, the diaries also show that she had an extensive knowledge of Kanpō (traditional Japanese medicine) and often fused western and Japanese medicinal practices when she provided care. Though midwives like Toku provided an invaluable service in the camps, Smith argues that their stories are often marginalized or even erased from official records.

Like his grandmother, Roger Shimomura has made a career of blending western and Japanese forms and traditions. As this excerpt from Seven Kabuki Plays shows, Shimomura utilized the centuries-old tradition of Japanese kabuki, a highly stylized dance-drama characterized with elaborate makeup and costumes. The performance piece is divided into seven acts, each connected to a painting in his Diary series, and incorporates poetry, music, and choreography, as well as recordings of Toku Shimomura reading portions of her diary and letters she sent to her husband-to-be from Japan. Shimomura in his introductory remarks also notes the use of kurogo (stagehands), often clad in black robes, which are a fixture of traditional kabuki plays. In an interview with Anne Collins Goodyear for the journal American Art, Shimomura recalled not being satisfied with the story of his grandmother and their incarceration experience relegated solely to two dimensions of the canvas.

Later on, as I started to uncover my grandmother’s autograph books and other books where she wrote poetry and songs and lyrics to songs and short stories and all that, my mind would just be flooded with how to use these things, and the only way I could do it was in performance. You can’t hear music and you can’t recite haiku with paint.

In Seven Kabuki Plays, the bleak landscape and howling winds of the Idaho prairie come to life. Under Shimomura and choreographer Marsha Paludan, the story of everyday survival, resistance, and joy that Toku Shimomura lived through at Minidoka is told in her own voice.

Though Roger was a small child when he and his family entered the camps, the incarceration experience left an indelible mark on his work. Through his performance pieces like Seven Kabuki Plays and paintings like Diary: December 12, 1941, which incorporate western motifs into traditional Japanese woodblock, or Ukiyo-e (pictures of the floating world) prints, Shimomura shows his audiences the daily struggles and injustices of being a prisoner in one’s own land, as well as the quiet resilience and perseverance through the pain and sorrow. One particularly potent cultural symbol that is present in both his works is that of Superman. In the same interview with Goodyear, Shimomura notes the way that Superman acts as both an aspirational symbol for him—“the American values that are in this country, to those rewards available for working hard and trying to attain success, like every other American, regardless of their cultural background or ethnic heritage”—but also as an icon that represented everything that was wrong about American life during World War II. “It certainly wasn’t a flattering depiction of America, but that’s exactly how I intended it.”

In recent years, Roger Shimomura’s work has expanded in scope to cover more broadly the themes of racism and xenophobia in American life, though in a light-hearted even humorous way. However, the experiences that he and his grandmother Toku endured in Minidoka, told through works like Seven Kabuki Plays, still loom large in his memory and colors the way he wants us to think about American history and culture, tragedies and all. 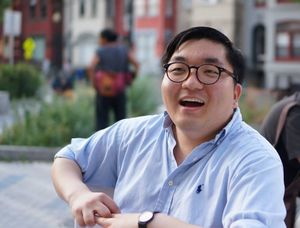 Jung Min (Kevin) Kim is a doctoral student in American Studies at the University of Maryland, College Park. Instagram