The breakout movie Hidden Figures tells the story of three African American women who worked as mathematicians at NASA. The story sheds light on the significant contributions of the three women—Katherine Johnson, Dorothy Vaughan, and Mary Jackson—but also the broader impact that women had behind the scenes at NASA.

Johnson, Vaughan, and Jackson all began their careers at the National Advisory Committee for Aeronautics (NACA)—which later became NASA—working as “computers.” Computers were not what we think of them today. They were people, primarily women, who reduced or analyzed data using mechanical calculators—we’ve previously explored the role of computers in astronomy.

The work of computers was largely invisible. Their names never appeared on reports. Still, there’s a lot we can learn about their work through primary sources. In an article for the Annals of the History of Computing, curator Paul Ceruzzi examines an astounding document; a memorandum dated April 27, 1942 that outlines the computing facility at the Langley Memorial Aeronautical Laboratory (LMAL), the main research facility of the NACA and where Johnson, Vaughan, and Jackson worked.

The memorandum, included below, was found in the files of the NASA Langley Research Center in Hampton, Virginia. The memo was written by R. H. Cramer, a representative from the Curtiss Aircraft Company at LMAL, to R. A. Darby, a Curtiss personnel manager. In it, Cramer describes how Curtiss might set up its own computing facility similar to the one he found at Langley.

In the 1930s and 40s Langley researchers primarily concentrated on the analysis of the aerodynamic properties of things like wing sections, propellers, and even whole airplanes. Engineers would begin their work by selecting a trial shape. They then built a scale model and placed that shape in a wind tunnel. In the tunnel, a battery of instruments measured its performance. The data from the test was then reduced and analyzed. Based on the results one parameter of that design was changed by a small increment and tested again. The steps were repeated until the performance was optimum for any given parameter. This method of repeated empirical testing required an enormous amount of computational work.

Engineers originally conducted this computational work, but it tended to lead to bottlenecks in progress. In the memo, the author wrote, “The engineers admit themselves that the girl computers do their work more rapidly and accurately than they would.” In part, this was because the engineers felt their advanced experience was being wasted on “mere repetitive calculations.”

The tone of the memo reveals something of the attitude toward sexual division of labor as it existed in 1942, Ceruzzi noted. Cramer, the author of the memo, had the notion that some jobs were for women and some were not. Ceruzzi wrote, “In every case we know of, the women’s work was subordinate to the work of the men for whom they computed.”

But Ceruzzi also noted that the memo makes clear that the work of a computer required skill and judgment. Computers gathered data by reading pressure values from manometers placed in the wind tunnel. Depending on the application, the data were smoothed, plotted, and interpolated. Data reduction and analysis were carried out with the help of calculators, slide rules, planimeters, drafting tools, and other instruments. The women in these roles knew how to organize computational work and how to do so quickly without making mistakes. This knowledge was unique to them.

From the memo, we also get an idea of the socioeconomic landscape for women in these positions. While their salaries were low ($1440 and $1620), they were higher than those paid to secretaries and typists. The majority of computers were college graduates, especially those selected as heads of computer groups. While the age of computers at the NACA may have averaged near 21, Cramer noted there were a surprising number of computers nearer to 30. And, the computers did not face discrimination if they were married.

While the memo does reveal some of the roadblocks that Johnson, Vaughan, and Jackson may have faced as women early in their careers, it tells us nothing of the additional discrimination they faced as African Americans. We do know that the NACA was segregated at the time and that the women were called “colored computers.”

Eventually, the introduction of electronic computers, as we know them today, made the profession obsolete. Hidden Figures highlights the uneasiness of the transition from human to electronic computers—Johnson is asked to verify electronic calculations by astronaut John Glenn before his famous Friendship 7 flight. We also see a measure of progress for women in science when we compare this memo to the story of Hidden Figures. In 1942, it was unlikely for a woman to move beyond the role of a computer, but during their careers, Johnson, Vaughan, and Jackson were known as engineers, computer programmers, and mathematicians—often the first in their positions. 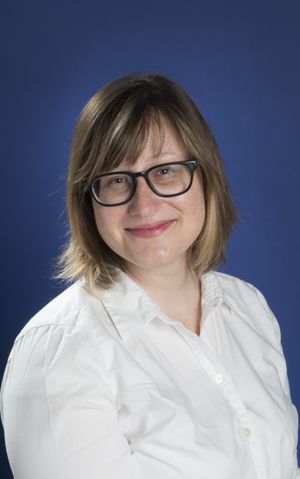 Jenny Arena helps to oversee the Museum’s websites, blog, mobile apps, content strategy, and in-gallery interactives. She also writes and edits content for the Museum’s many digital projects. She has more than ten years of experience working in digital, communications, outreach, and exhibition development. She holds a BS in journalism and art history from the University of Florida and an MS in museum studies at The George Washington University.