Like the rest of the world, Hollywood has a soft spot for mothers, even though expressing that love can be difficult. Predictably, the film industry has devoted considerable screen time to the subject of motherhood, with mothers and babies figuring into the earliest cinema actualities. Once narratives developed, mothers became central figures in many movies. Edison's The Klepto-maniac (1905) showed what happened to a poor mother when she stole food for her children. In Lubin's Mother's Dream (1907), a mother has a nightmare about what would happen to her children if she died. 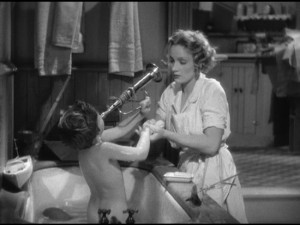 But just as often mothers in movies were peripheral characters who either approved the actions of their children, or not. Filmmakers found it easier to examine the romance and courtship that led to marriage and motherhood, subjects that might not evoke feelings of responsibility and guilt from their male viewers. When it came to mothers themselves, early filmmakers tended to adopt the Victorian sensibilities that pervaded American culture at the time. In D.W. Griffith's The Mothering Heart (1913), for example, Lillian Gish's character, a recent mother, flies into a rage when her husband rejects her for a cabaret dancer.

The depiction of mothers, and women in general, changed dramatically as movies matured in the 1920s. The industry also began to target women as an audience. Films like Why Change Your Wife? (1920) and Are Parents People? (1925) made fun of Victorian stereotypes, and even a melodrama like Miss Lulu Bett (1921) was more sympathetic toward deceived women than earlier titles might have been. In films like Where Are My Children? (1916), director Lois Weber took on birth control, abortion and other controversial topics. Film historian Richard Koszarski described Our Dancing Mothers (1926) as "a Jazz Age version of A Doll's House." (The play itself was filmed three times between 1917 and 1922).

Motherhood remained sacred in mainstream culture—magazines, popular songs like "Mother Was a Lady." The novel Stella Dallas (1923) struck a particular chord that has resonated to this day. Written by Olive Higgins Prouty, Stella Dallas took motherly sacrifice to painful extremes, forcing its mother to give up her daughter so she could enjoy a better life. The novel became a play in 1924 and a film the following year. Produced by Samuel Goldwyn, directed by Henry King, and starring Belle Bennett and Ronald Colman, the movie was an enormous hit. 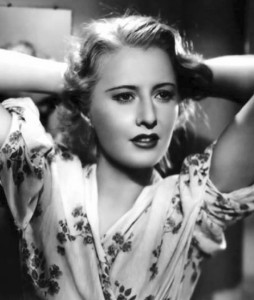 Stella Dallas became one of the first and most successful soap operas on radio, broadcasting almost twenty years. It was also the basis of a Bette Midler vehicle—Stella—in 1990. But the version that succeeds best was directed by King Vidor in 1937 and starred Barbara Stanwyck in one of her signature roles. Brash, vulgar, Stanwyck's Stella is a difficult woman to like, but one whose maternal instincts are impossible to fault.

Characters like Stella spread throughout popular culture. Some actresses refused to portray mothers, worried that it might date them in their fans' eyes. But in Blonde Venus, Marlene Dietrich became an especially glamorous sacrificial figure. Ginger Rogers worked around the age issue by adopting an abandoned infant in Bachelor Mother (1939, later remade with Debbie Reynolds and Eddie Fisher as Bundle of Joy).

Mothers faced other issues in movies, notably race in the two versions of Imitation of Life (1934 and 1959). More matronly actresses developed careers as mothers. Beulah Bondi, for example, who brought extraordinary nuances to her many roles. In Make Way for Tomorrow (1937) she has to cope with being betrayed by her children. In Of Human Hearts (1938, a Civil War-tearjerker, she begs President Abraham Lincoln to spare her son from a court-martial verdict. In Remember the Night (1940) she balances her son's happiness with his lover, a pickpocket who could destroy his career. And in It's a Wonderful Life (1946) she has to help her son through a lifetime of emotional crises. Jane Darwell was a memorably steely Ma Joad in John Ford's The Grapes of Wrath (1940). The sentimental Ford usually had a stalwart mother somewhere in his movies, like Dorothy Jordan in The Searchers.

Movie mothers in the 1940s became more psychologically complex, just like film in general. A star like Olivia de Havilland might suffer the moral stigmata of unwed motherhood in To Each His Own (1946)—and win a Best Actress Oscar in the process. But in Now, Voyager (1942, based on an Olive Higgins Prouty novel), Bette Davis had an ambiguous relationship with her domineering mother. Barbara Stanwyck was torn between caring for her two boys and pursuing her own happiness in My Reputation (1946, based on the novel Instruct My Sorrows by Clare Jaynes). And for Oscar-winning Joan Crawford in Mildred Pierce (1945), motherhood meant competition with her daughter Veda (played by Ann Blyth). Kate Winslet starred in the 2011 remake, an HBO miniseries. 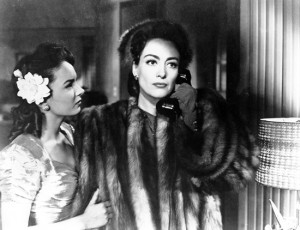 How far a mother would go to protect her children became the basis of The Reckless Moment (1949), a first-rate suspense film directed by Max Ophüls and starring Joan Bennett. It was updated recently as The Deep End, starring Tilda Swinton. The 1950s saw the flowering of Douglas Sirk's overheated soap operas. In All That Heaven Allows (1955), children exert a malevolent influence on their widowed mother Jane Wyman.

But the 1950s also produced several films about large and extended families. Myrna Loy played real-life efficiency expert Ernestine Gilbreth Carey in Cheaper by the Dozen (1950). (In-name-only updates starring Steve Martin appeared in 2003 and 2005.) Betsy Drake and her then-husband Cary Grant grappled with the problems of an adopted child in Room for One More (1952). By the 1960s, the genre had evolved into Yours, Mine and Ours (1968), with Lucille Ball mothering  eighteen kids, and Doris Day in her last feature film to date taking on four that same year in With Six You Get Eggroll. (Yours, Mine and Ours was remade in 2005 with Rene Russo.)

Two of the most frightening film mothers from the period can be found in Alfred Hitchcock's Psycho (1960) and the 1962 film adaptation of the Arthur Laurents, Jule Styne and Stephen Sondheim musical Gypsy. 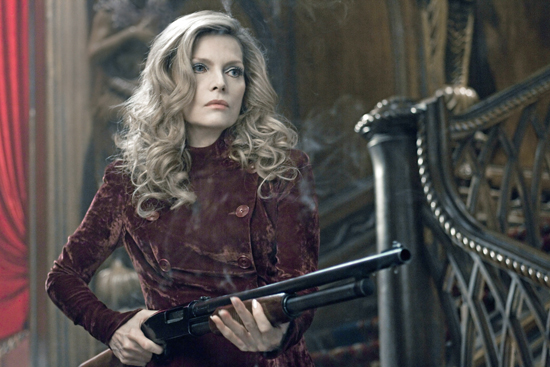 The 1960s also saw the rise of television sitcom mothers in shows like "Leave It to Beaver" and "The Donna Reed Show." More recent examples include Roseanne," "Reba," and "The New Adventures of Old Christine."

In the past few years motherhood has become the provenance of the Lifetime cable channel, which has built an audience around mothers deceived and defrauded when they and their children aren't being stalked by psychopaths. So it was a relief to encounter Michelle Pfeiffer in Dark Shadows. As matriarch Elizabeth Collins, she stands up to vampires, witches, and werewolves fearlessly—the kind of mother you want in your corner.