Bourbon’s introduction to America begins with the first Thanksgiving and ends with dismemberment in a Virginia swamp some 500 years ago. In 1619, Captain George Thorpe — a well-connected lawyer back in England — moved to a plantation on the outskirts of Jamestown. Intensely interested in the New World that surrounded him, Thorpe sought out new crops that could be a potential cash source for the colonists. He struck gold with corn and, short on the ingredients to brew English beer, began substituting his new preferred grain into the distilling process.

Thorpe’s distilled corn spirit may have tasted nothing like today’s bourbon, and there’s no record that he sold it to other colonists, probably reserving it for his own use. His experiment with distilling corn didn't last long, however — by 1622, an American Indian rebellion led to the massacre of a quarter of America’s colonial population; Thorpe was bludgeoned to death and his body mutilated.

To Reid Mitenbuler, Thorpe’s short-lived experimentation with what would become known as bourbon is the perfect way to begin exploring the history of the spirit in America. 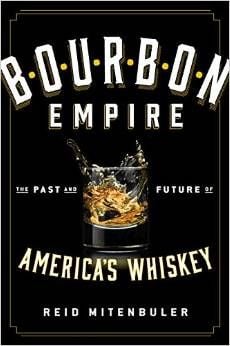 Bourbon Empire: The Past and Future of America's Whiskey

How bourbon came to be, and why it’s experiencing such a revival today

“I wanted to use that story because that to me got to the idea of capitalism and business in America,” says Mitenbuler. “You’ve got this guy, George Thorpe, who is a New World fortune seeker who comes over here and part of his mandate was to look for crops that would be profitable. He was looking at silk, he looked at possibly buying grapes for wine, and corn catches his eye -- this New World grain.”

That New World grain would eventually grow into an $8 billion dollar global industry, but it would always retain a particularly American sensibility, earning a Congressional declaration that dubbed it America’s native spirit in 1964. Bourbon Empire, Mitenbuler’s history of the spirit, dissects that designation: what makes bourbon distinctly American?

From the spirit’s roots in colonial Virginia to today’s craft movement, Mitenbuler teases out the contradictions inherent in the spirit’s history. In an industry dominated by marketing that sells bourbon as a small-producer craft product, readers of Mitenbuler’s tale might be surprised to hear that by the year 2000, close to 98 or 99 percent of American whiskey was produced by eight corporations running 13 plants. Knob Creek, with its block-printed label and small-batch look, is produced by Jim Beam. Bulleit Bourbon claims heritage back to 1830, but was actually created in 1999 and is owned by Diageo, a spirit company that owns Smirnoff vodka.

“Whiskey is an industrial product in a lot of ways, so it makes sense that these big companies could do it well,” says Mitenbuler.

In a sense, Mitenbuler argues, the contradictions in bourbon’s story are what make it such an American spirit — both agrarian and industrial, craft and commodity, new and old. Today, as bourbon experiences a boom not seen since before Prohibition, a new class of consumers is yet again reimagining America’s favorite spirit.

“We’ve reimagined it into this thing it is right now, this icon,” Mitenbuler says. “That’s how history works for a lot of things, we reimagine the past. The myth is created well after the fact.”

We spoke with Mitenbuler about his new book and the unique status bourbon holds as an American icon.

A theme that runs throughout the book is the dual nature of bourbon -- you describe it by turns as agrarian and industrial, frontier and capitalistic, big and small. Is that unique to bourbon?

That’s one of the things that attracted me to the story, because America is like that -- we’re full of contradictions. People a lot of times have nicknamed bourbon “America’s spirit.” What makes it America’s spirit? Capital, business -- that’s what America is known for worldwide.

Americans are sometimes uncomfortable with admitting that hardcore business is part and parcel with some of the rhetoric we wrap up around ideas of freedom and independence. I don’t know if we should always try to divorce the two -- we should just admit to it.

You also talk a bit about the Civil War, and how that reshaped whiskey in the same way that it forever transformed the trajectory of United States history. How did the Civil War change bourbon?

It was after the Civil War that you really see brand names come into existence. Today, you see bourbon brands with all kinds of dates going way into the past, and those usually aren’t true.

After the war, you see the nation really reaching full-scale industrialization, and that’s when you first see today what we recognize as our modern whiskey industry beginning to emerge. The industry starts to consolidate -- a small number of large producers that are specializing in whiskey.

Kentucky is largely thought of as the capital of bourbon production -- 95 percent of today’s bourbon comes from Kentucky. But that didn’t happen until after Prohibition.

It’s like a lot of businesses in America, where it used to be that every town had its bank or its pharmacy and you get to today where you go into every town and every town has its CVS. It’s the exact same thing with whiskey.

There’s a mystique held to the small producer -- we cherish that in America. But large corporations know that there’s that pull to the idea of small holders, so they work very hard to make their brand seem small. You go to the liquor store and see 100 different labels and think they all come from different places, but a lot of the time the spirit in the bottle is the exact same thing as what might be a few rows over, just labeled and marketed differently.

What’s the biggest change between the bourbon we’re drinking now and bourbon from the 1900s, when bourbon was really coming into its own?

I’ve had this conversation with a lot of people: was the actual product in the bottle better or was it worse? I’ve tried some older bourbons. [Bourbon can keep indefinitely as long as it is stored properly, in a sealed bottle without too much extra air.] Some were incredible and some were disgusting. We sometimes attach romance to the past, especially when we’re talking about food. I often joke that you want to drink the frontier's whiskey as much as you want the frontier’s medical care.

What is the most exciting thing that’s happening in bourbon right now?

All the experimentation going on with the craft movement, as well as reintroducing some techniques that have been lost. When craft whiskey reaches its full potential, it’s going to be great. But I’m also quick to point out that we’re not there yet.

Whiskey has a longer learning curve than just about any type of food. It really does take years to make the most exceptional types of whiskey, and that’s something that a lot of these new producers just don’t have yet. They don’t have the capital or the time needed to make what are really the best whiskeys.

When did bourbon become such an icon in the American imagination?

Right now is when it’s really reaching its peak as that kind of icon. One of the things people forget today, because bourbon in recent years has been up-marketed and become a foodie thing, is that bourbon is really a very humble product. It’s just some grain fermented, thrown into a barrel and aged. It doesn’t necessarily have to be that expensive to be good. It’s a very humble thing, and throughout most of its history it had a downmarket, blue collar reputation. That’s been a big part of its heritage.