This Kentucky College Has Been Making Brooms for 100 Years 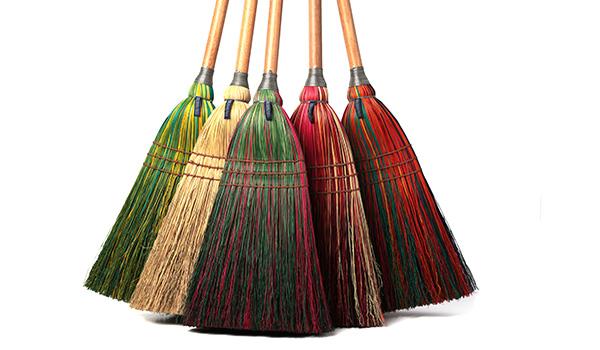 The brooms that are made at Berea College, in the Appalachian Mountains of Kentucky, aren’t just for sweeping—as anyone can tell just by looking at them. Some are made with corn that’s been dyed a fiery red or deep purple, and often there’s intricate braiding where the bristles connect to the handle. Coveted by craft aficionados, these brooms are decorative objects, worthy of being hung on a wall.

Berea is a liberal arts college, not a craft or art school, but nonetheless students there make brooms by hand, in the country’s longest continuously operating broomcraft workshop. Celebrating its centennial this year, the program carries on an American craft tradition that’s rarely practiced today.

“There’s something very nostalgic and wholesome about a handcrafted broom,” says Aaron Beale, director of student craft at Berea. “It’s an object rich with meaning, beyond its practical purpose.” The roughly 5,000 brooms made each year at the college are sold through a website and distributed to a number of specialty craft shops. According to Beale, Berea’s broomcraft workshop is the only one in the country to dye significant quantities of broomcorn, which requires a lot of time. And the brooms often sell out quickly. “We work at a fever pace to keep up,” Beale says.

Berea College, in Berea, Kentucky, was founded in 1855—it began as a one-room school—by abolitionists Reverend John G. Fee and Cassius M. Clay. Fee believed that education should promote equality and excellence among men and women of all races. The school welcomed men and women, including black men and women, making it the first coeducational and integrated college in the South. From its early days, the college was committed to educating students primarily from Appalachia. J.A.R. Rogers, a first principal of the school, called the area “a neglected region of the country” after a trip through the mountains. (Even today, the poverty rate in Appalachia is higher than in the rest of the country.) At this time, the tuition-free college comprises roughly 1,600 “academically promising students with limited economic resources,” according to its website.

The brooms not only reflect the college’s Appalachian surroundings, but also its remarkable history. From its inception, the college had a labor program intended to help students cover their expenses. The school’s founders wanted to dignify manual labor, which was associated with slavery. To this day, every student works ten hours a week, earning them a modest paycheck. Around the turn of the century, the college’s third president, William Frost, went into the surrounding mountains to recruit students, and he bought traditional crafts, such as weaving and woodworking, from individual households along the way. “The arts and crafts revival was just sweeping into the U.S. from Europe, and there was a tremendous demand for authentically made goods,” says Beale. “Frost astutely recognized that he could use the marketing of traditional Appalachian crafts as a way to promote the college on fundraising trips to the Northeast, where people were very curious about Appalachia, because it seemed so foreign. And, he recognized that students could learn a lot by keeping the traditions alive.” The student craft program began in 1893, with weaving. Today, it also includes broomcraft, woodworking and ceramics.

Using Appalachian craft to recruit students became even more important after 1904, when the passage of the Kentucky Day Law, which prohibited the education of black and white students together, forced Berea to segregate. The college appealed the law, all the way to the Supreme Court, but it lost the case. So, it split into two separate colleges, Berea College and the Lincoln Institute. (It reintegrated in 1950).

In 1920, the college opened the broom making workshop, so that men who were assigned to work the college’s farm would have work to do in the winter. At its peak, the workshop was producing more than 100,000 basic floor brooms a year, which were sold in bulk to distributors. But the operation wasn’t profitable, so, in the 1930s, the workshop shifted its focus to making small quantities of finely crafted decorative brooms. The department name was changed to broomcraft.

“Back in the day, you’d grow yourself a broom,” says Chris Robbins, director of broomcraft at Berea. “Every community would harvest their broomcorn and take it to the broom maker in town. If you didn’t have a broom maker in town, you’d make it yourself. But it takes about 50 plants to make one kitchen broom, so … it’s a lot of effort for one broom.”

Brooms are made of broomcorn, also known as sorghum vulgare, a crop similar to corn that was grown as animal feed. In the late 18th century, New England farmer Levi Dickinson discovered that the material was superior when it came to capturing dirt and dust. But growing sorghum vulgare is labor intensive; it can only be harvested by hand. Commercial broomcorn farming has been based in Mexico since the 1980s.

To make a broom, the broom maker attaches the broomcorn to the wooden broom handle with the help of a winder, sometimes called a spindle, which holds tension on a wire or string as the broom maker turns the handle and gradually adds the broomcorn. Then comes the decorative braiding. The broomcorn stalks are braided with string around the handle, as in Berea’s “Shaker braid” brooms. Finally, the broom is stitched flat—the Shakers began doing this in the early 19th century, for more effective sweeping—and the ends are cut off even.

But that’s just a basic kitchen broom. Berea has seven types of brooms available on its website. Hearth brooms are shorter, meant for sweeping out fireplaces. A “cobwebber” is meant for cleaning in corners. Turkey-wing whisk brooms are sized for the hand, meant for sweeping tabletops. And a “rocket” broom is intended for witches—or Harry Potter fans.

Berea’s broomcraft workshop consists of two production lines on either side of a long room. Each line includes a winder, a stitcher (for flattening the brooms) and then a simple wooden braiding table. One wall is decorated with a collection of many of the brooms that have been made at the workshop over the years; the styles can change a bit from year to year. The dyeing—of 30 pounds of broomcorn at a time—takes place in a small adjacent room, which is filled with several vats. In another small, heated room, the broomcorn dries on big bakery racks. One student mixes the colors and adds the broomcorn to the vats, and then several students are involved in transferring the broomcorn after it simmers in the dye for up to seven hours. Though students learn every aspect of broom making, the process is typically a team effort, with some students winding and others braiding, in a sort-of assembly line.

“Berea is strengthening the art form,” Brown says. “The students get a lot of mentoring, and there’s a lot of emphasis on professionalism, on creating something you can actually sell. Folk arts are typically learned informally outside of institutions, so the program is quite unusual.”

Berea’s “Appalachian” broom has an antique feel; it’s made with raw broomcorn, with the stalks still attached. The stalks are seamlessly braided onto the handle, unlike in the “Shaker Braid” broom, where stalks are separated and the braid is an applied decoration. “It’s a rough-hewn broom,” Robbins says. “I designed it to pay homage to my ancestors who made brooms. The idea is to take you back to the good old days.”

Technically speaking, there’s no singular “Appalachian broom,” according to Mark Brown, the folk and traditional arts director at the Kentucky Arts Council. Appalachia is a huge region of the U.S., stretching over several states and comprising many different cultures, so, it would be impossible to single out one style, he says.

President Frost’s efforts not only helped the college thrive, but they also made the town of Berea into a hotspot for craft. When Frost began collecting crafts, regional artists began relocating to Berea, because they knew they had a customer there. Today, according to Brown, Berea is often described as the arts and crafts capital of Kentucky, with the annual Berea Craft Festival drawing more than 8,000—equivalent to half the town’s population—every July.

Nonetheless, broom makers are hard to find. Brown, who runs the juried state-wide market Kentucky Crafted, says he rarely comes across artists who are dedicated solely to broom making. While there are many hobbyists, Robbins estimates there are less than 200 people worldwide who make brooms by hand for a living. But brooms might be having a Renaissance. Beale and Robbins both say they’ve observed significantly increased interest in the past few years, though they can’t pinpoint why. The trend is perhaps part of a broader drive for all things handmade—Etsy went public in 2015—or somehow related to Harry Potter fandom.

Layne Piatt, a sophomore at the college, has been working in broomcraft since he first arrived on campus. “I mostly do the winding, which I like in part because it’s physically demanding,” he says. “But this year I decided to do more braiding, and I’ve gotten decent at it.” The work gets his mind off of the outside world, and his homework. “I’ve learned a lot of patience,” he says. “Making brooms teaches you to continually better yourself and your art.”

To celebrate the workshop’s centennial, Robbins designed an anniversary broom, a hearth broom with a wide traditional “fantail” head of broomcorn dyed in a variety of rich, mostly autumnal, colors. The workshop recently began using natural dyes for the first time; the browns and yellows in the broom come from walnuts and osage orange heartwood, both grown in the college’s 9,000-acre forest. In addition to a woven tag marking it as from Berea College, each anniversary broom is signed, either by a student, or by Robbins.

“We pride ourselves on making the Cadillac of brooms,” Robbins says, “and this one is a reflection of where we’ve been and where we’re going.”