It’s safe to say that this year did not go as many of us expected. In year two of the pandemic, who would have guessed that Covid-19 variants and a politicized resistance to vaccines would keep many of us sheltering for another winter?

Unlike 2020, however, the availability of vaccines—now even for many children—has made it possible to gather with friends and loved ones in real life. Board game lovers who had turned to virtual versions can now beat the video-chat fatigue with in-person competitions. As usual, to create this year’s list, we spoke with board game sellers and board game fans from around the country. We hope their picks get you as excited about cardboard and plastic as they did us. Game on!

(And just a note: The supply-chain issues you’ve read about—caused in part by labor and shipping container shortages—are real. If you want to gift one of these games for an upcoming holiday, don’t wait to buy!)

Good for: Your family member who owns a National Parks passport
Kind of like: Parks
Players: 2-4
Ages: 10 and up

The smaller, lighter successor to Parks (which earned a spot on our 2019 Best Board Games list), Trails follows a similar formula: Players visit national parks, take photos, look for wildlife and collect souvenirs. But where Parks can take up to an hour to play, Trails is a shorter jaunt. Its lower cost and small size means it can travel easily. “It’s like the boiled down version of a really great game,” says Mik Fitch, who along with his wife, Starla, runs the YouTube channel Our Family Plays Games. Even though it’s smaller and simpler to understand, it’s still “a beautiful, great, strategic game.” 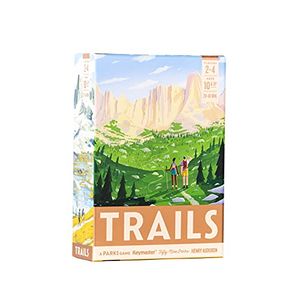 Trails, a Family and Strategy Board Game About Hiking and Outdoors by Keymaster

Take a hike with TRAILS and explore iconic sites and national parks across the US. With easy-to-learn rules, you’ll gather resources, go birding, and earn wilderness badges.

Good for: Fans of traditional trick-taking card games who want something new
Kind of like: Euchre, if it were upside down
Players: 2-5
Ages: 10 and up

The Crew: The Quest for Planet Nine, a cooperative trick-taking game set in outer space, was one of the breakout hits of 2019.  “The first one is really good,” Mik says. The new version, which stands alone (no need to buy the original game to play) and is set underwater, “is better than the original.”

If you’ve played Hearts, Spades or euchre, the basic mechanics of The Crew should feel familiar, says Margaret Kleist, who runs the Grand Rapids, Michigan-based Blue Bridge Games with her husband. Players play cards from their hand onto the table, one at a time. The highest card in the suit wins the trick, unless it’s been trumped. But the twist is that in this game, instead of trying to take the most tricks, all players are cooperating to try to ensure that certain tricks are won by certain players—and table talk is forbidden. “It’s strategy, it’s cooperative, it’s family friendly,” Kleist says. The underwater theme is essentially pasted on, as was its predecessor’s space theme—short paragraphs before each game introduce a vaguely related element—but feel free to make “blub blub” noises as you play to make it feel more immersive. 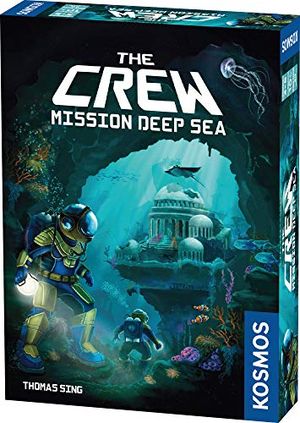 Good for: Committed gamers
Kind of like: A comic book you can play, Jumanji, and a puzzle all wrapped into one
Players: 1-4
Ages: 8 and up

The Initiative is a campaign board game—one played over multiple sessions—that comes with a 48-page comic book. “It hits a lot of points for me,” Kleist says. “It’s strategy, cooperative, it’s got word and puzzle solving in it.”

If you haven’t played a campaign board game before, think of it as a video game with different “levels.” Each level is a self-contained play session (in The Initiative, a session lasts 30-60 minutes) in which you either win or lose, but either way, you discover more of the story and possibly change the rules of the game for the next session.

Players play as kids who discover a mysterious board game at a yard sale. (Meta!) “It’s a little Jumanji,” says Kleist. Over the course of 14 missions, players discover more of the story, read more pages of the comic book, or alter the rules or gameplay. What puts The Initiative at the top of Kleist’s list is what happens afterward, though.

Most campaign style games, after they’ve been played through, sit on a shelf. But The Initiative has 30 additional puzzles for players to solve, all feeding into one metapuzzle. “If you like escape rooms or word games, this is great,” Kleist adds. 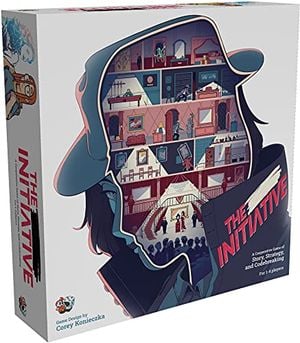 In 1994, four teenagers find a mysterious game at a yard sale. As they play it, they discover it is strangely connected to their lives. What will they risk to unravel the secrets of The Initiative?

Good for: Families with young kids who need a break from screen time
Kind of like: “Angry Birds” in real life
Players: 2
Ages: 7 and up

In Catapult Feud, two players (or teams of two) set up castles (made of plastic “bricks” guarded by plastic “troops”) across from each other. Then they use the catapult and “boulders” to turn the opponent’s castle into rubble. The player who knocks down the other troops first is the winner. It’s about as simple as that. “The strategy is how you build the castle, and where you place your troops,” Kleist says, although we suspect that “strategy” takes second place to the satisfaction of watching a perfectly aimed boulder arc through the living room and level a sibling’s fortress. 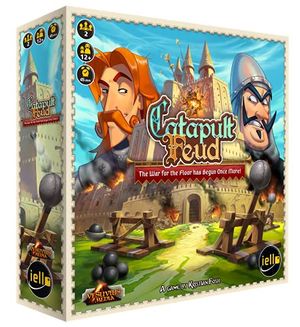 Two households, the Chauforts and the Cunningfields, both alike in dignity, in their fair kingdoms. If only there wasn't that ancient grudge! Build your castle, set up your troops, load your catapults and use your cunning tactics to conquer the floor! Knock down all your opponent's troops to win!

In this gorgeous tile-placement game about nature and the Pacific Northwest, players compete to build the best salmon run, the best bear habitat or the largest collection of deer. The beautiful cards and art were designed by, as Mik Fitch says, “the queen of board game art” Beth Sobol (who also illustrated Wingspan, from our 2019 guide).

The gameplay of Cascadia is fairly simple—pick a habitat and an animal, then play them in front of you—but the scoring can get rather complex. Raina Medina, of the TikTok channel 1 Minute Board Games, says, however, that with multiple variations in scoring cards, players can decide up front if they want a simpler, lighter game, or a more complicated one. In fact, there are more than 1,000 scoring combos to choose from, meaning that no game of Cascadia will be exactly the same. 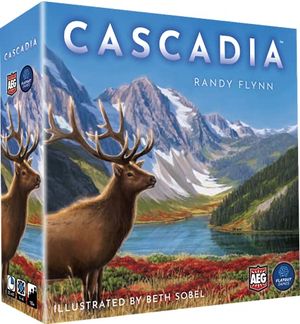 Take a journey to the Pacific Northwest as you compete to create the most harmonious ecosystem in Cascadia!

The original Micro Macro Crime City won the 2021 Spiel des Jahres—the industry’s highest award—for its innovative gameplay, which essentially boils down to playing a giant “Where’s Waldo” game. Instead of looking for a lanky, bespectacled guy in red and white stripes, players search for robber rabbits, murderous cats and little cartoon guys crushed by falling pianos. But some families saw the game’s cartoony style and mistakenly thought it would be a good family game, Kleist says. In fact, the game contains references to pretty heavy topics: domestic abuse, infidelity, alcoholism and self-harm, among others...even though the characters are all cartoon animals. So this year, publisher Edition Spielwise released Micro Macro Crime City - Full House, which is much more family-friendly (although the game still comes with four cases marked “explicit,” and parents should play those missions before deciding whether to show them to kids).

In both games, players unfold a 2.5-by-3-foot map covered in a giant drawing of a city and work together to solve mysteries. A card gives an initial scenario, like “Fernando has lost his top hat,” and players search the board to find clues that explain what happened. With 16 missions to play through, the game has plenty of secrets to discover.

Good for: The family member who always blows on their dice or says “mama needs a new pair of shoes” before rolling
Kind of like: Yahtzee, with dwarves
Players: 1-4
Ages: 10 and up

In this press-your-luck game, players are dwarves mining gems (and, oddly, beer) out of a mountain. The gems (and beer) are dice, and the strategy of Dice Miner revolves around which dice you collect and which you re-roll. “It’s a very cute game, very unique,” says Starla. “It's one of those games that forces you to change your strategy based on the dice that are available to you each round…plus, you get to shout out ‘Cheers!’ when rolling a special die to another player!” 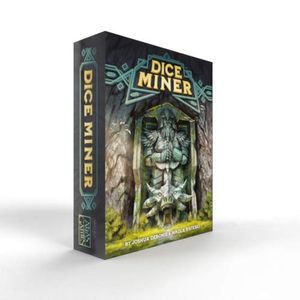 In Dice Miner, our Dwarf heroes take turns mining custom dice from the physical 3D mountain. Push your luck, but watch your step!

Good for: People who love shuffleboard
Kind of like: Coin-pusher arcade games
Players: 2-4
Ages: Not provided

In Japan, keeping rhino beetles as pets and pitting them against each other in wrestling matches is a popular hobby. In this dexterity game, two or three players (or two teams) recreate these tiny sumo matches. The goal of Kabuto Sumo is to use wooden tokens to push your opponent out of the ring—reminiscent of the coin-pusher games found in arcades. “The components are great, [with] wacky sizes and shapes,” Medina says. 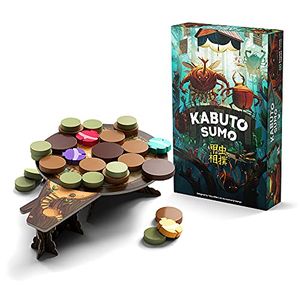 Good for: History nerds
Kind of like: The original 7 Wonders
Players: 2-7
Ages: 8 and up

The original 7 Wonders is rightly held up as a classic. It combines card drafting (choosing the best card for your strategy from a selection) and engine building (your in-game powers get more interesting and exciting as the game progresses) in an easy-to-learn package, all wrapped up in a great theme of building the seven wonders of the ancient world. This year’s 7 Wonders: Architects is the same idea, but “really brings in family,” Mik says—the game is streamlined and easier to pick up for younger kids. Just like the original, the game can be played with anywhere from 2 to 7 players, so it’s perfect for a group of any size. 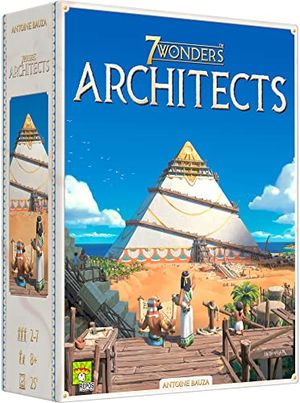 We all aspire to leave our mark. As one of the great ancient architects, your goal is to create a wonder so amazing that it, as well as you, will go down in history as a testament to human ingenuity and skill!

Good for: Couples, or any other group of two
Kind of like: Carcassonne
Players: 2-4
Ages: 14 and up

This deceptively simple tile-laying game, themed around medieval mapmaking, is perfect for two people (or two teams). In Land vs Sea, players take turns laying map tiles: the player representing Sea scores points every time a sea is fully enclosed by land, and the player representing Land earns points every time an island is formed inside the sea. If the basic game gets too stale, you can add additional ways to score with mountains, coral and trade routes. While the game can be played in teams, Medina says it’s best with two players. The illustrations—inspired by medieval mapmaking and illuminated manuscript imagery—are a joy to look at, and numerous Easter eggs are hidden throughout. Keep an eye out for a particularly dangerous rabbit. 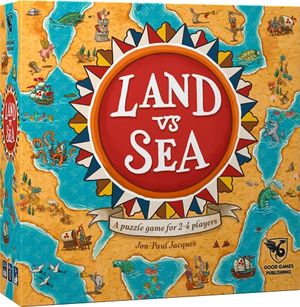 Explore a map of infinite possibilities! What wonders will be found on Land or in Sea? Its up to you to find out.