Like some of man’s oldest forms of folk art, the snowman is, and always has been, a byproduct of man’s primal instinct to depict himself in art, be it a cave painting or a sculpture made out of snow. A frozen Forrest Gump, he’s a reflection of our own development. The snowman’s history spans the Renaissance, the early years of the American colonies, even the Franco-Prussian War. But one of his most intriguing eras was the “Dean Martin Years,” a period of excessive drinking and questionable activity.

What caused the snowman to go on the binge? This lost weekend for the snowman comes after a period of being treated poorly at the turn of the 20th century. The snowman was the tormented target of boys and girls and persons of all walks of life. Evidence of his suffering comes from many sources. The 1890s book Young Folk’s Cyclopædia of Games and Sports describes a variation of the nineteenth century game “Aunt Sally,” in which children score points by throwing snowballs at a snowman (instead of throwing sticks at a scarecrow named Aunt Sally). Polls taken by Journal of American Folk-Lore a few years later show that “making the snow-man a target” was among young boys' favorite activities along with squat tag and “stealing hot biscuits.”

There is also visible evidence in trade cards, beautifully illustrated pieces of paper that were the business cards of their day. Shop owners would leave them on their counters for customers and collecting them became a popular hobby. Like so many other advancements in the world -- including the first photographs and early silent movies -- the snowman was right there, showing up front and center. And more often than not -- taking a beating. With the popularity of postcards by the turn of the century, it was no different; images of snowmen pelted with snowballs by gangs of scamps and wayward youths plowing their sled or pig-driven toboggans into snowmen (that’s right, there used to be pig-driven toboggans).

Some of these early postcards show snowmen being bludgeoned by two-by-fours and stomped on by tots. There are examples of snowmen being held up by gunpoint by little girls and stabbed with brooms. At one point, a snowman is dragged into a studio and forced to pose with kittens—while not violent, it was certainly humiliating. But the ultimate indignity would have to be a holiday card showing Santa Claus in a convertible racing car running over a horrified snowman, who is screaming for dear life.

To add insult to injury, the snowman somehow became a spokesperson for any product of an embarrassing sort, appearing in ads for every personal hygiene problem imaginable: dandruff, gas, hangovers, constipation, and bad breath Add this all up and you have a Frosty with a pretty shaken psyche. We literally built him up only so we could, apparently, knock him down and use him as a piñata. It’s no wonder the snowman turned to booze.

While no one knows for sure when exactly the snowman began smoking a pipe and drinking hard liquor, it may have started as early as 1890, based on a label from a bottle of whiskey from that year. An 1898 postcard shows a snowman carrying two bottles of champagne off to an office party. On holiday greeting cards from the 1900s through and on (up to the 1930s), the snowman often has a drink in one hand and a pipe in the other, mirroring our society’s changes and America’s fascination with smoking and drinking. This would eventually escalate to the snowman cavorting with women and offering drinks to minors. One could argue that these depictions were, in a way, humanizing, but seeing a tipsy snowman chasing a girl with a stick is disturbing at best.

By 1908, there was clear evidence of his partying ways were out of control. In the silent movie The Snowman by Wallace McCutcheon, a chain-smoking snowman is swigging whiskey and appears in the rest of the film sloshed, inspiring a flogging by the townspeople. This behavior would continue on film and media through magazines and postcards as a pickled, skirt-chasing, under-the-table lush. In other words, he had become a frozen W.C. Fields. By the ‘30s and ‘40s, there is no question, the two started to look alike, both wearing straw hats, putting on more weight and looking more round and sporting crimson noses. And both enjoyed prolific silent movie careers based on their reputations as charming drunks. It’s hard to say if either had copied from the other but they were both enhanced by the other’s notoriety. Ironically, W.C. Fields hated the holidays and passed away on Christmas Day, 1946.

This image of the snowman soon became lucrative. By the time Prohibition ended in 1933, the snowman had become the pitchman for almost every leading liquor company. He appeared in print ads for Miller Beer, Ballantine Ale, Rheingold Beer, Schlitz, Schenley, Oretel’s Lager Beer, Chivas Regal Scotch, Fort Pitt Pale Ale, Mount Whitney Beer, Jack Daniel’s and Four Roses. Success soon went to his big head and he became quite the lady’s man. He was a media star, posing for cheesecake publicity shoots, popping up on girlie calendars and matchbook covers. It was commonplace to see a deliriously happy snowman flirting with bikini-clad starlets and celebrities like Shirley Temple, Dinah Shore, and Esther Williams.

Eventually the snowman would clean up his act, and his motivation for drying out is clear: to cash in on the next advertising front. The snowman’s saturation in booze ads catapulted him to become a marketing kingpin. Wearing nicer scarves and a classier silk top-hat, the snowman branched out to hock everything under the sun -- from Cadillacs to tuna, booties to insurance, even asbestos. The prevalence of those earlier snowman-gone-wild days is now a distant memory as our society insists children’s beloved holiday icons adopt a more proper decorum. 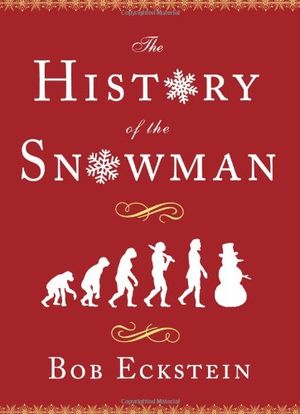 The History of the Snowman

The History of the Snowman [Bob Eckstein] on Amazon.com. *FREE* shipping on qualifying offers.