Long before scientists and engineers could send astronauts into space, they had to convince the public—and the officials who would fund these first forays—that such a wild undertaking was possible. “You couldn’t just say, ‘We’re going to build rockets,’ and ask people to believe it—you really had to show them how,” says Piers Bizony, a British journalist and author of the lavishly illustrated book The Art of NASA, out this month. It reveals how the agency and its contractors sold many of their otherworldly ideas to a sometimes skeptical nation. From cutaways of lunar modules and landing capsules, to fantastical depictions of life on Mars in far-off 2020, these images represented NASA’s first steps in the space race and helped build congressional support for ambitious projects like the space shuttle.

Today, Bizony believes, they offer not only visions of a glorious American past but also hope for a future that could still be ours. “Getting into space for peaceful purposes—everybody looks up to America for that,” he says. “Speaking as an outsider who loves the USA very much, I think the United States needs to be reminded what it has been capable of.” 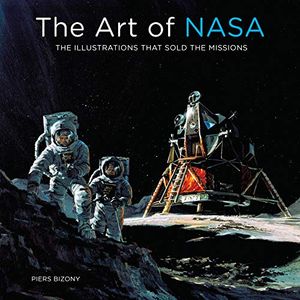 The Art of NASA: The Illustrations That Sold the Missions

Culled from a carefully chosen reserve of approximately 3,000 files deep in the NASA archives, the 200 artworks presented in this large-format edition provide a glimpse of NASA history like no other.