I’m the type who looks at a menu online and decides what to order before I get to a restaurant. I am also loyal to a fault: When I find what I love, I stay with it. I mean this in every sense of the word.

In regard to food, I’m not alone. The standard American diet is, with a few notable exceptions, a supersized version of what we ate 40-odd years ago, made up of mostly grains, fats, oils and animal-based proteins. We eat about the same amount of fruit today that we did in the 1970s (60 pounds a year) and the same amount of vegetables we ate in the 1990s (110 pounds). In the last 45 years, our milk consumption has dropped from 21 gallons to 13 gallons, but we moved the fat we used to get from whole milk over to cheese, which is why our dairy consumption has nearly tripled—from 8 pounds to 23 pounds per person. Our love of cheese has contributed to a whopping 20 additional pounds in total fat we eat each year.

The loss of agrobiodiversity—the reduction of the diversity that’s woven into every single strand of the complex web that makes food and agriculture possible—has resulted in a food pyramid with a point as fine as Seattle’s Space Needle, making it harder and less pleasurable for us to feed ourselves.

I know it feels counterintuitive to contemplate loss, particularly against the backdrop of floor-to-ceiling aisles in supersized supermarkets. In a Walmart (the number one grocery chain in America) in Winston-Salem, North Carolina, I counted 153 different flavors of ice cream and eight different brands of yogurt. But then I looked further. The choices are superficial—primarily in flavor and secondarily in brand, most of which are owned by the same company. In addition, more than 90 percent of every container of yogurt, milk and ice cream is made with milk from one breed of cow, the Holstein-Friesian, known as the highest-producing dairy animal in the world.

I counted 21 kinds of potato chips, but in the produce aisle, I found only five types of potatoes. Most of the bagged potatoes didn’t include names, only colors—red, white, yellow—plus “Idaho.” The orange sweet potatoes were loose and stacked high. Now I understand why most of those chips I saw just listed “potatoes” as their primary ingredient. Despite being the top vegetable consumed in America, potatoes have been relegated to the background, the carrier for vinegar and salt, sour cream and chives.

Bananas—America’s most popular fruit—also carried only a single descriptor: “banana.” Although no variety was listed, I knew it was the threatened Cavendish. There are over 1,000 varieties of bananas grown in the world; however, the one that ends up on supermarket shelves isn’t the one that has the best texture or taste, but is one that transports easily and has, so far, managed to beat back disease. 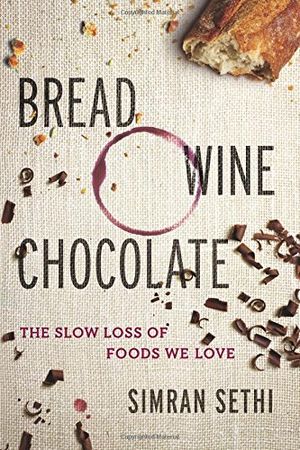 Bread, Wine, Chocolate: The Slow Loss of Foods We Love

I saw six kinds of apples, including Granny Smith, Gala, Fuji and the mealiest, most inappropriately named apple: Red Delicious, one bred for beauty, not taste. Apples were among the first fruits to be cultivated. The original was likely small and tart, closer to what we think of as a crab apple. But, through breeding, we slowly transformed its texture, taste, color, size and level of sweetness. There are now 7,500 varieties of apples grown all over the world, less than 100 of which are grown commercially in the United States. In fact, nearly every historic fruit and vegetable variety once found in the United States has disappeared.

For millennia, we’ve made decisions about what to grow or not grow—and what to eat or not eat. That’s what agriculture is: a series of decisions we, and our ancestors, have made about what we want our food and food system to look and taste like. But our ability to make these decisions—and indulge in our pleasures—is being compromised in ways that are unprecedented.

While some places in the world are experiencing an increase of diversity in certain parts of their diet, the general trend is the same one we see in phones and fashion: standardization. Every place looks and tastes more similar—and the country that sets this trend is America. The refined carbohydrates, animal proteins and added fats and sugars that make up the majority of our diets have also become the template diet for the world.

This increase in sameness is what conservationist Colin Khoury and co-authors of the most comprehensive study to date on the diversity (and lack thereof) of our food supply call our “global standard diet.” The researchers analyzed 50 years of data on major crops eaten by 98 percent of the population. They found diets around the world have expanded in terms of amount, calories, fat and protein, with the greatest number of our calories now coming from energy-dense foods such as wheat and potatoes. In areas facing food insecurity, this is a very good thing.

The researchers also learned that agrobiodiversity within our dietary staples has increased. Another good thing. In Vietnam, 80 percent of calories from plants used to come from rice; now corn, sugar and wheat have risen in importance, and calories from rice have dropped to 65 percent. In Colombia, palm oil used to be nonexistent. Now nearly half of Colombians’ plant-based fat comes from palm, and the country is the third largest producer of palm oil in the world.

But this availability obscures the more challenging truth that Colin and his colleagues discovered: Globally, foods have become more alike and less diverse. As the amount of food around the world has shrunk to just a handful of crops, regional and local crops have become scarce or disappeared altogether. Wheat, rice and corn, plus palm oil and soybeans, are what we all eat now—the same type and the same amount.

Yes, this increase in carbs, fats and proteins has helped feed hungry people, but on a global scale it’s also increased our chances of becoming what author Raj Patel calls “stuffed and starved.” The world overconsumes energy-dense foods but eats fewer foods rich in micronutrients (the small but essential amounts of vitamins and minerals we need for healthy metabolism, growth and physical development). While 795 million people go hungry, over 2 billion people are overweight or obese. And both groups suffer from micronutrient malnutrition.

The global standard diet is changing the biodiversity of nearly every ecosystem, including the 100 trillion bacteria that live in our gut, part of what’s known as our microbiome. The foods and drinks we consume add to or, increasingly, detract from the diversity of our intestinal flora and have implications for how healthy or unhealthy we are over the long term.

The factors that contribute to this change are complex and interconnected, but the main reason for this shift is that we’ve replaced the diversity of foods we used to eat with monodiets of megacrops, funneling our resources and energy into the cultivation of megafields of cereals, soy and palm oil. As farmers from all over the world move toward growing genetically uniform, high-yielding crops, local varieties have dwindled or disappeared altogether. This is why we are now facing one of the most radical shifts we have ever seen in what and how we eat—and in what we’ll have the ability to eat in the future.

According to the Food and Agriculture Organization of the United Nations (FAO), 95 percent of the world’s calories now come from 30 species.  Of 30,000 edible plant species, we cultivate about 150. And of the more than 30 birds and mammals we’ve domesticated for food, only 14 animals provide 90 percent of the food we get from livestock. The loss is staggering: Three-fourths of the world’s food comes from just 12 plants and five animal species.

While these numbers are rough estimates, they speak to a startling trend: We rely on fewer species and varieties for food and drink—a treacherous way to sustain what we need in order to survive. It’s dangerous for the same reason investment experts tell us to diversify our financial holdings: Putting all our eggs in one basket (either figuratively or literally) increases risk.

A reduction in agrobiodiversity places us in an increasingly vulnerable position, where warming temperatures or a single pest or disease could severely compromise what we grow, raise and eat. This was, in part, the cause of the Irish potato famine of the 1840s, when one-third of the population was dependent on potatoes for food and one-eighth of the population (about 1 million people) died when a disease known as potato blight ravaged the crop. It also contributed to Southern corn leaf blight, which wiped out one-fourth of American corn in 1970. And now it exacerbates the proliferation of wheat rust, known as the “polio of agriculture,” which is threatening 90 percent of African wheat.

It’s why plant geneticists are working around the clock to develop a new type of banana to replace the Cavendish, a variety that was introduced when the soil fungus Fusarium oxysporum, in the 1950s, wiped out the Gros Michel—the banana that used to be the one on store shelves. Those Cavendishes are now succumbing to Tropical Race 4, a strain of the same fungus that decimated the Gros Michel.

No matter where you live, you have the memory of something you used to eat that is no longer a part of your diet—something your grandmother used to make, something a small shop used to carry. Something you have lost. This extinction is a process; it happens one meal at a time.

Fortunately, a lot of these changes have occurred in the last few decades, which means they can change again. That is, of course, as long as we sustain the diversity found in the wild, on farms and in stored collections that contain the traits we might need now or in the future: immunity to a disease, greater adaptation to a changing climate, the possibility of higher yields or greater nutritional value—and delicious taste.

But in order to support this diversity and facilitate change, we have to start thinking differently about the food in our fields and on our plates, and be more discriminating about its sources. “How do we buck the system just a little bit?” Colin asks. “Think of oil. We’re definitely eating more of it: soybean oil, then palm oil—much more than other oils around the world. Although it isn’t immediately obvious that eating olive oil would be radical, in the big picture that’s exactly what it is. Eating olive oil is now a radical act. Eating anything that’s not rice, wheat, corn, soy or palm oil is radical.”

The revolution starts here, on our plates, by looking at the pillars of our own diets and by making simple changes. The way to take back this power for ourselves is to understand why we eat what we eat. And to understand what we’re losing—so we know what to reclaim.

Journalist and educator Simran Sethi’s new book, Bread, Wine, Chocolate: The Slow Loss of Foods We Love, is about the rich history—and uncertain future—of what we eat. The book traverses six continents to uncover the loss of biodiversity told through an exploration of the senses and the stories of bread, wine, coffee, chocolate and beer. Sethi seeks to make abstract concepts of conservation intimate by highlighting the ways in which they impact not only plants and animals in the wild, but the foods that end up on our plate.

These excerpts from the book, copyright © 2015 by Preeti S. Sethi, are reprinted with permission by HarperOne, a division of HarperCollinsPublishers.