It's a great time to be a bartender—and drinker—in America. Interest in, and sales of, premium distilled spirits has been on the rise for decades, spurred by a renewed interest in American heritage spirits, classic cocktail flavors and small, craft distillers. There might only be one other time in history in which a spirit-lover would have similarly thrived: the period between 1850 and Prohibition.

"The first great immigration from western Europe was in the 1840s, and it's no accident that the craft cocktail golden age, as it were, began around 1850," says Philip Dobard, director of the New Orleans-based Museum of the American Cocktail, adding that until then, the country was "largely a pioneer state."

Before 1850, Americans certainly didn't want for alcohol. The first colonial settlers in Jamestown and Plymouth most likely brewed beer, while rum and later whiskey dominated the landscape of American distilling. But individually crafted drinks weren't the norm: most people drank punch, created in communal bowls, or straight spirits,  considered safer than water.

The European immigrants brought with them a new arsenal of flavors and ingredients, along with a love for fine dining and haute cuisine. In the 1850s, America's first great restaurants, catering to a new clientele with new tastes, first opened their kitchens. Alongside these restaurants, Dobard explains, grew new bars, creating individual drinks with fresh ingredients like juices and bitters.

Though the word cocktail first appeared in 1806—defined as "a stimulating liquor composed of any kind of sugar, water and bitters," the first cocktail, the Sazerac, was invented in in New Orleans in 1838. The word "mixologist" first arrived in print in 1856. And by 1862, the first book of cocktail recipes had been published, written by a San Francisco bartender named Jerry Thomas. In the book's preface, Thomas wrote that the cocktail was a beacon of American innovation:

This is an Age of Progress; new ideas and new appliances follow each other in rapid succession. Inventive genius is taxed to the uttermost in devising new inventions, not alone for articles of utility or necessity, but to meet the ever-increasing demands for novelties which administer to creature-comfort, and afford gratification tc (sic) fastidious tastes.

A new beverage is the pride of the Bartender, and its appreciation and adoption his crowning glory.

Alongside the Sazerac, classic cocktails like the Manhattan, Old Fashioned and Jack Rose trace their birth to this great moment in early bartending. But as cocktail innovation reached its peak, another movement caused its swift demise: the passage of the Volstead Act in 1919, which made Prohibition law throughout the land.

"Prohibition happened and it killed the craft," Dobard says. "A lot of American bartenders went abroad to work, others went into other professions." Breweries and distilleries were forced to shutter—those that managed to remain open had to change their business models entirely (Dobard describes one winery in Los Angeles that was able to stay open during Prohibition by making sacramental wine for religious services).

Even with the repeal of the Volstead Act in 1933, the craft cocktail movement languished. The United States faced the Great Depression, and World War II caused the diversion of domestic industry into war industry. As the war ended, industry once used to the mass production of wartime goods found new life in mass producing food items, spurring the industrialization of the food system—and the drinking world, with the rise of mass-produced sour mixes and juices.

In the 1960s, however, social upheaval inspired Americans to turn a critical eye to their food and drink. "It became clear to a critical mass of people that what we were consuming, as diners and imbibers, belonged to an agricultural industrial complex," Dobard says. "We were consuming whatever they handed to us. In questioning that, people learned how much more there was."

That reawakening coincided with an expansion in leisure travel, with more Americans being exposed to the tastes and flavors of foreign locales. Much like immigrants inspired the first cocktail revolution with their unique flavors, Americans in the 1960s and '70s came home desiring a taste of their travels in their local bar.

Inspired by a growing demand for cocktails made the traditional way, with an eye toward history and superior ingredients, a few bartenders began to revolutionize the American bar—by modeling it after its own past. Pioneering bartender Dale Degroff was largely responsible for leading the movement at its beginning in the 1980s, turning out historically inspired cocktails in New York City's Rainbow Room.

"It's only been recently that the cocktail has really come back," says James Rodewald, author of American Spirit: An Exploration of the Craft Distilling Revolution, who recently spoke at a spirited event at the National Museum of American History's After Hours series on the topic."I do agree that this is the best it's ever been if you like a mixed drink. The variety, the ingredients, the techniques—all top notch, at least at the best places."

Today, craft cocktails continue to be a growing trend in America, as bartenders and drinkers continue to discover that sometimes, the best revolution is one that looks back. "They're the best drinks," Rodewald says. "There is nothing better than a well-made Manhattan."

James Rodenwald joined D.C.-based bartender Derek Brown and craft distiller Michael Lowe (of New Columbia Distillers) for a discussion of craft brewing in America. The talk was part of the National Museum of American History's American History After Hours series, which explores topics in American history through food. Upcoming topics include: Julia Child on March 16; How Chicken Became America's Meat of Choice on April 8; Sushi on May 13; among others. 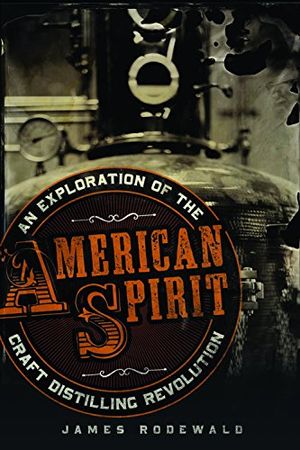 American Spirit: An Exploration of the Craft Distilling Revolution