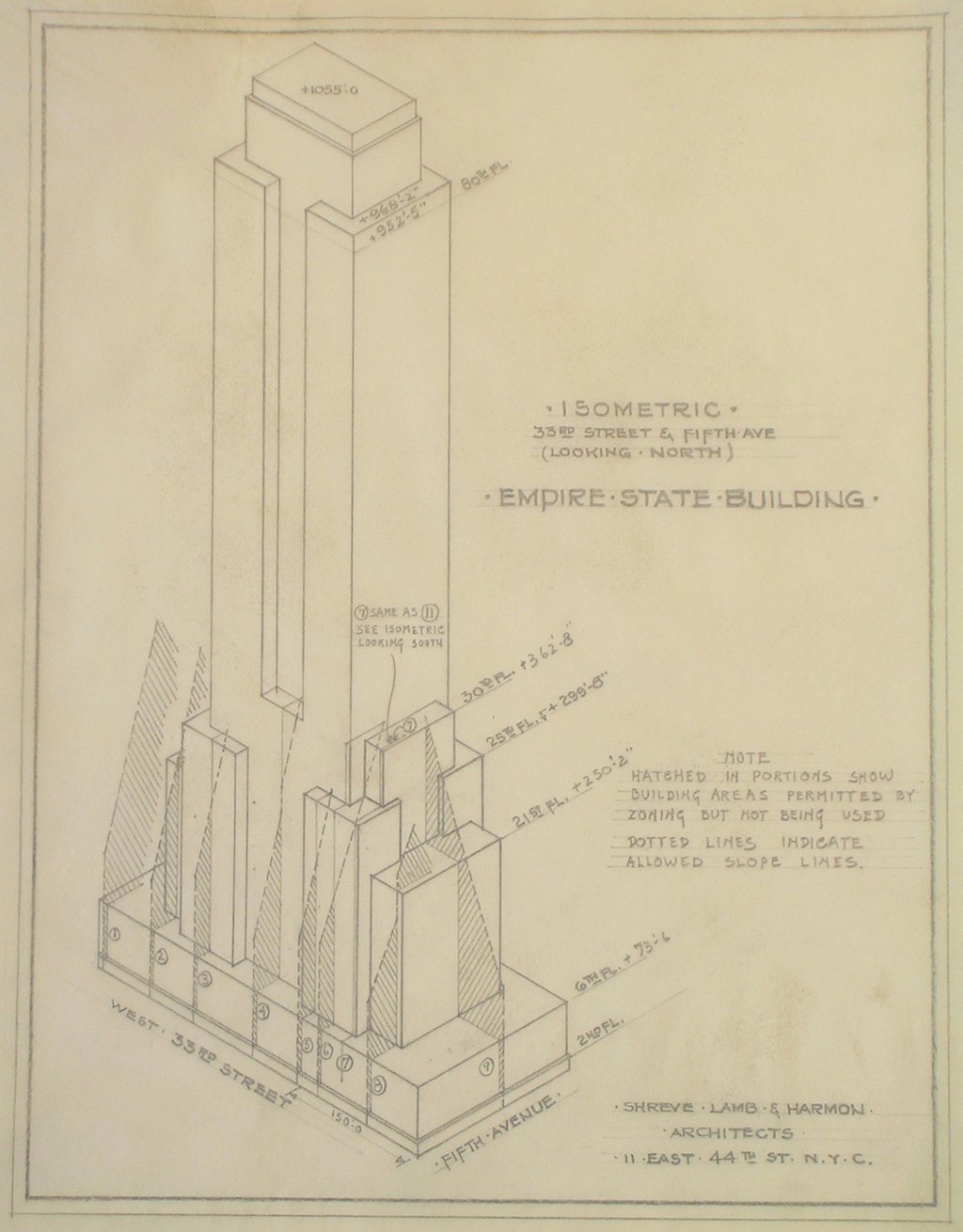 Oblivious to the impending Great Crash of the stock market, a group of industrialists connected to General Motors banded together in 1929 behind the idea of erecting the world's tallest building in Manhattan to eclipse the nearby Chrysler Building owned by their competitor. The site at Fifth Avenue between 33rd and 34th Streets had previously been occupied by the exclusive Waldorf-Astoria Hotel, until they tore it down for their new symbol of sky-high American corporate power—the Empire State Building.

The architecture firm Shreve, Lamb and Harmon Associates was chosen to design the colossus. William F. Lamb produced the drawings in only two weeks, selecting an art-deco style that looked like a pencil. Lamb used earlier designs for the Reynolds Building in Winston-Salem and the Carew Tower in Cincinnati as inspiration. His design later won several awards, including the gold medal from the Architectural League in 1931.

From a broad, five-story base covering two acres, the structure would tower 102 stories, rising 1,454 feet to the top of the antenna spire, making it the world’s tallest skyscraper. Another distinctive feature would include windows that were flush instead of recessed, and the tone of the exterior would appear blonde.

The general contractor was Starrett Brothers & Eken, the recognized leader in skyscraper construction. Indeed, one of the brothers, William A. Starrett, had recently authored the book, Skyscrapers and the Men Who Build Them, in which he wrote: "Building skyscrapers is the nearest peacetime equivalent of war… . The analogy of war is the strife against the elements." In 1930 and 1931, the firm compiled a notebook on the project, entitled Notes on Construction of the Empire State Building, consisting of 77 pages of text typed on blue-lined graph paper and put in a three-ring binder. The presentation also included black-and-white photographs mounted with black corners on 32 sheets of brown pressboard. Both the text and the photos provided a detailed, step-by-step account of the building process for the historic skyscraper.

Commenced in the early years of the Great Depression, the project employed as many as 3,400 construction workers on any single day, many of them immigrants from Europe, as well as hundreds of fearless Mohawk Indian iron workers. At least five workers died during the frenetic building.

The whole project took an amazing twenty months from the signing of the first architectural contract in September 1929 to the formal opening on May 1, 1931. The construction was completed in an astonishing 410 days. The final cost was $40,948,900, equivalent to $635,021,563 in 2015. As of 2007, it was still the second largest single office complex in the U.S. after the Pentagon. Immortalized in innumerable books and movies, it was most famously scaled by King Kong, who fended off attacking planes from its celestial spire, in 1933.