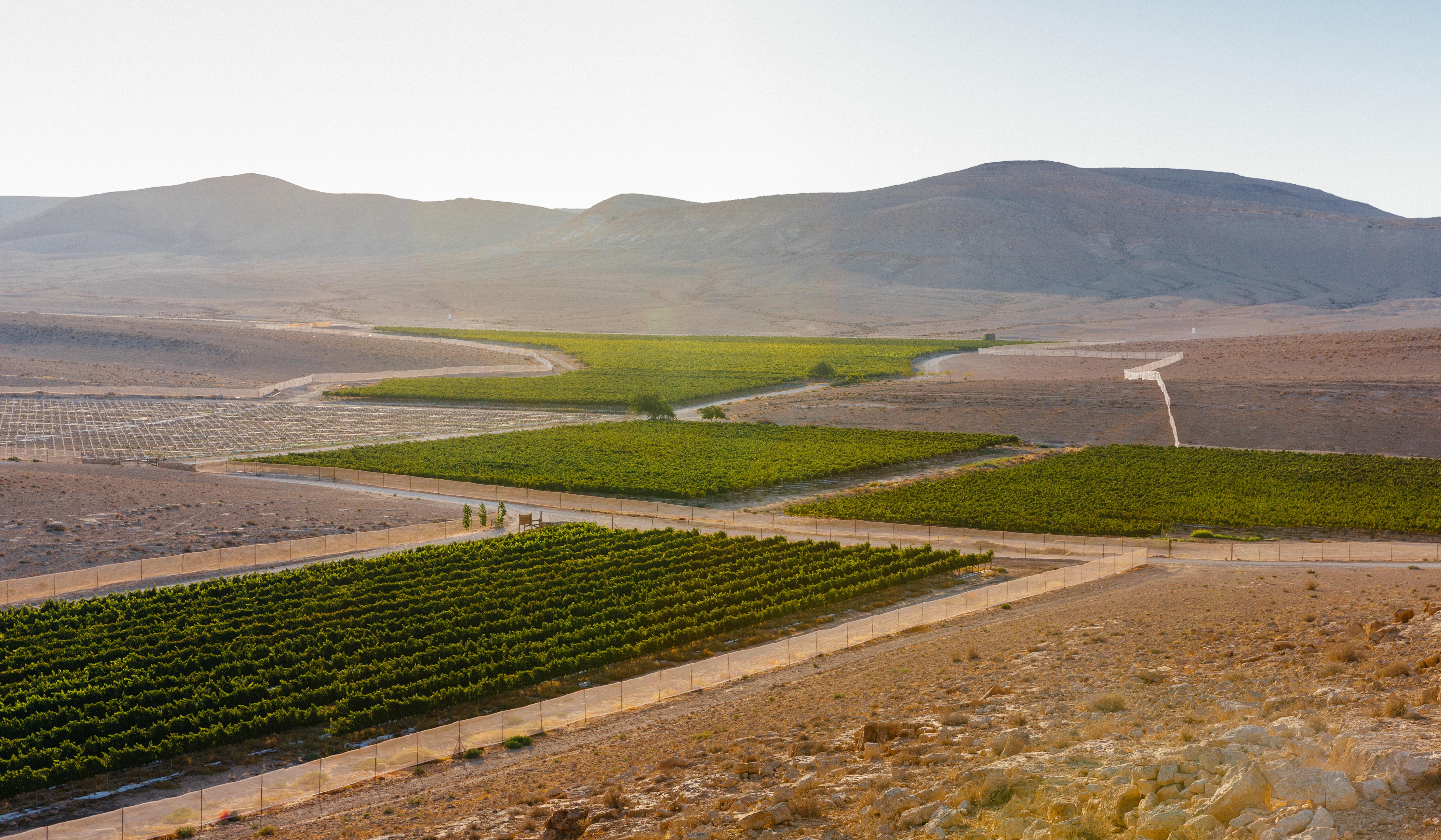 When the Israeli winemaker Eran Raz decided to start his own vineyard, he didn’t look to the established wine regions in the country’s verdant hills. Instead, he was one of a small, intrepid group of vintners who acquired patches of barren desert in the Negev Desert—a dusty no-man’s land in Israel’s south, about 15 miles from the Egyptian border to the west and the Jordanian border to the east. Here, rainfall averages 10 or 11 inches each year and temperatures frequently hover near 100 degrees. “They say grapes need to suffer to make good wine,” says Raz. “Here that is no problem.”

More than a decade later, the grapes at his Nana Estate Winery seem unaware of their suffering. The vineyard is a green oasis among waves of dusty brown desert. Lush vines twist up from the chalky, nutrient-poor rocks that pass for soil in the Negev. Until the late 1980s, the desolate, hilly chunk of desert was empty save for military bases, roaming herds of ibex and a few settlements of nomadic Bedouins. Today, Nana is just one of 30-some farms and vineyards in the desert between the Negev’s main city, Beersheba, and the mid-sized mountain town of Mitzpe Ramon.

Most of the winery’s rows of grapes creep out from Highway 40, which has become the starting point for several well-trod wine routes. The region now pulls in a steady stream of tourists who can sample traditional varieties like chardonnays and malbecs at destinations ranging from old-school kibbutzes to built-up wineries like Desert Estate Carmey Avdat, which offers vacation cabins. Some specialize in kosher varieties—using ingredients and equipment that have been certified and supervised by a rabbi—but the majority cater to secular visitors from around the world. Though the region has not gotten much attention from the very top tiers of international wine society, the Negev’s wines consistently net good scores from wine critics, and their strong, sunbaked flavors are considered distinctive by connoisseurs. On the popular wine app Vivino, the user-generated ratings for Negev wines hover around 4 out of 5 points. A review from the BBC praises the merlot at Carmey Avdat for its “unique, salty desert taste.”

“They’re reputable and they’re critically acclaimed in many regards,” says Greg Gambetta, a professor with the Institute of Vine and Wine Sciences at the University of Bordeaux in France. “I think it shows us the limits to which you can push some of these varieties and that’s really valuable.”

Technologies developed in the Negev’s extreme growing conditions are drawing attention from traditional winemaking regions, which have been coping with higher temperatures and less rainfall than in years past. In 2019, wine production in Italy and France fell 15 percent, and in Spain it dropped 24 percent. The International Organisation of Vine and Wine attributes those declines to changes in the climate.

In the northeastern Italian region of Friuli Venezia Giulia, for instance, growers have spent centuries producing coveted white wines from grapes fed by abundant rain and local rivers. But because of rising temperatures, the grape harvest in the region is ten days earlier than it was two decades ago, says Enrico Peterlunger, a viticulture professor at the University of Udine in Friuli. Rain patterns have changed, too, becoming more concentrated; heavy rains briefly douse crops, which are left dry for longer stretches than before. Israeli winegrowers “show our way ahead,” Peterlunger says. “This is the destiny of viticulture in Europe.”

One of Peterlunger’s research partners, an Italian-born biochemist named Aaron Fait, is based at Ben-Gurion University, which has a campus in the middle of the Negev Desert. Fait runs an experimental vineyard just up the road from Nana winery and is working to develop approaches that might one day benefit Europe’s winemakers.

Showing off his vineyard in the June afternoon sun, Fait wore a wide-brimmed leather hat to shield his face from the harsh light. His grapes, he pointed out, have a similar setup to protect them: a special trellising system he designed so leaves grow over the fruit, shading them. Fait and his students are also working on grafting wine grapes onto vines that can tolerate higher levels of saline than conventional varieties can. The goal is to develop grapes that are able to flourish on the brackish local groundwater, which contains salt from the Mediterranean Sea.

Fait’s specialty as a plant molecular biologist drives his insights into terroir. The French word literally means earth or soil, but for wine experts—who speak the term with an almost mystical reverence—terroir refers to the way factors like climate and topography shape the taste of the resulting wine. “The biochemical complexity is what makes the value of the wine on the market,” he says. “It’s not like a tomato or a table grape. With a wine grape, it’s really an amazing asset of the chemicals that together create the sensations when you drink the wine.”

The Negev is uniquely suited to demystifying the elements of terroir and perhaps learning how to adjust them for a changing climate. The rocky desert lacks nutrients and other necessities, so growers must enrich the soil one ingredient at a time. That allows scientists to observe the impacts of individual variables, seeing how they influence the growth of the grapes and the taste of the resulting wine. Fait envisions creating a sort of manual for each grape variety, a playbook with the exact inputs that every type of grape needs to create perfect wine. “Nowhere in the world can you use the field as a true laboratory like we use it in the Negev Desert,” says Fait. “Everything can be shaped and controlled for the good of your experiment.”

Take water stress. Winemakers have long known that wine grapes develop a more intense flavor when they are deprived of water to some degree. But until recently no one had isolated this factor. Controlling for every other influence, including fertilizer levels, scientists are testing exactly how much water stress it takes to improve a grape’s flavor. They’re learning how a stressed grape plant regulates its metabolism and sugar production, and how reactions differ among grape varieties. Syrah, for example, responds quickly to environmental changes, while cabernet is more resilient.

Even once each grape’s ideal conditions are identified, maintaining them will likely require a level of manipulation that was previously frowned upon. European vineyards are already coming around to one Israeli invention: drip irrigation, in which pipes and hoses deliver the exact amount of water a plant needs directly to its roots. The European Union long banned or restricted vineyard irrigation for fear that it would inflate yield and interfere with terroir. Major droughts in the early 2000s started to erode these regulations. In 2006, wine authorities in France, the strictest country, began to relax their irrigation rules.

“Now every farmer knows what drip irrigation is and knows that some day he could use it for his farmyards,” Fait said.

Up on a mountain ridge overlooking the modern Negev vineyards along Highway 40, the ruins of the ancient city of Avdat hold evidence of some of the world’s earliest winemaking. At least five wine vats and one wine press are scattered among its crumbling walls. Visitors can walk up to several of the stone pits where bare feet stomped on grapes some 2,000 years ago. The juice stains are long since gone; the vats are now the color of brown sand. Some vats are simple bowls carved into the rock; others are lined with delicate stone patterns.

Archaeologists say Avdat became a winemaking hub after the Nabateans—a group of Arab nomads—settled here around the first century B.C. and grew some of the region’s first wine grapes. These wines were traded throughout the part of the Byzantine empire along the Mediterranean Sea.

Today’s Israeli winemakers are catering to modern appetites with European varieties like merlot, chardonnay and cabernet sauvignon, which taste very different from the wines the biblical kings drank. But Elyashiv Drori, a molecular biologist at nearby Ariel University, is hoping to bring back ancient Israeli wines. Eight years ago, he began studying the genetics of grapes native to the region.

“We started a very wide survey walking through trees, through deserted ancient villages and every rural area in a very orderly manner and we found and collected more than 600 different grape samples from grapes that had actually grown feral in the wild,” Drori said. He and his colleagues have identified six grapes—three reds and three whites—that have characteristics good for wine. The team is now propagating the grape tissue cells and clearing them of pathogens. A few of these grapes may be ready for cultivation in as little as a year, and in about five years, Drori says, Israelis may be able to drink wine similar to what their ancestors once drank.

The project is partially driven by archaeological interest, but Drori and his colleagues believe the ancient grapes found in the Negev also might be well-suited for the future, even outside Israel. It stands to reason that grapes thriving in the desert today will handle arid conditions better than European varieties do. “Some of these varieties show very promising resistance” to drought, Drori said. He envisions using them for a breeding program that will produce even hardier grapes.

Not long ago, introducing new varietals from outside a particular wine region would have been heresy to European officials such as the Bordeaux Supérieur Association, one of France’s wine-governing bodies. But in June 2019, in response to climate change, Bordeaux announced that it would approve seven new varieties from elsewhere in France and abroad. This marks the first time since 1935 that wines stamped with the Bordeaux label have been allowed to deviate from the region’s traditional 13 varieties, and this could open the door for heat-resistant grapes like Drori’s to make their way into this prestigious region.

Back at Nana winery, Raz grows some traditional European varieties himself, operating his drip-irrigation system using an app on his phone. But as grapes are adapted to climate change, what’s considered a “traditional”-flavored wine may need to adapt too. Sometimes, he glances over to the ancient farming terraces that overlook his field. He says he feels both the weight of the past and the possibility of the future in his desert vineyard. “The last farmer that grew something in this area was 2,000 years ago,” he said. “But every year I learn something new.” The breakthroughs taking place in the Negev each day give him hope for the future.

Lindsay Fendt is a journalist who covers the environment in the U.S., Central America and the Middle East. Her work has appeared in The Guardian, Univision and Al Jazeera.

Yadid Levy is a photographer based in Tel Aviv and Buenos Aires. His photographs have appeared in several publications, including Time and Vanity Fair.