When it comes to creating a sense of place through prose, William Faulkner has long been considered a master. Famous for penning such classics as The Sound and the Fury, As I Lay Dying, Absalom, Absalom!, and a bookshelf’s worth of other novels, the late author didn’t have to look far for inspiration, often turning to Rowan Oak, his estate in Oxford, Mississippi, as his muse.

Now, a new book illustrates the Nobel Prize winner’s marriage of prose and place, exploring his more than 30-acre sanctuary, canopied in ancient cedar trees, influenced his writing. Written by Oxford-based botanist and photographer, Ed Croom, and published by the University Press of Mississippi, The Land of Rowan Oak: An Exploration of Faulkner’s Natural World brings his words to life in a series of captioned color photographs that encapsulate what Faulkner once called his “little postage stamp of soil.”

With camera in hand, Croom has been photographing Rowan Oak for more than a decade, often visiting the property at the first signs of daylight, when the landscape is still shrouded in mist and before the crowds begin to trickle in for various tours of the property. He estimates that he’s easily taken more than 10,000 photos over the years (additional photos are on his website and Instagram pages)—though he admits that initially, he never intended to publish them in book form. Instead, he used those peaceful moments of solitude for personal meditation and to study the natural world.

“After ten years, I figured I had enough photos to show—from the heart—the beauty, mystery and sanctuary of this place,” Croom tells Smithsonian.com. “As a botanist and someone who is interested in conserving nature, I thought the best way for me to do so would be to start taking pictures. Visitors to Rowan Oak often ignore the landscape and just want to see Faulkner’s typewriter; however, the historic landscape that nurtured Faulkner is the same today [as it was when he lived here].”

As an example, Croom points to the gravel driveway leading up to the more than 170-year-old clapboard home, which Faulkner purchased in 1930. The road is lined with the same Eastern Redcedar trees that had greeted Faulkner and his wife Estelle when they lived there. (Croom estimates that the trees were planted in the mid-1800s, long before Faulkner was even born.) It’s also eerily similar to a passage in Faulkner’s novel Sartoris, in which he wrote, “From the gate the cinder-packed drive rose in a grave curve between cedars.”

“[Faulkner] often wouldn’t tell you exactly where [the setting] was, or would say it’s in another part of [Lafayette County, where Oxford is located],” he says. “But [from my photos], you can see that the scenes and plants [he describes in his books are all right there]. I think Faulkner was writing about what he knew.”

Of course, Croom has done very much the same with the release of his own book, which started with his observations of the natural world on display at Rowan Oak. It was through his interest in botany that he would eventually become acquainted with the author. 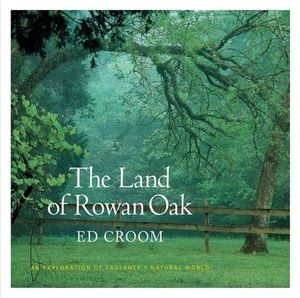 The Land of Rowan Oak: An Exploration of Faulkner's Natural World

“I didn’t grow up reading Faulkner,” he says. “I learned about him through Rowan Oak. I started wondering what this place meant to him, so I began reading his short stories, then figuring out where these images and places he wrote about really were. I realized that they were all right here. So I came to him backwards.”

In addition to linking Faulkner’s words to place, Croom’s book describes in detail the various flora found on the property, and contains a map that pinpoints where each photo was taken.

“Every photo contains a caption with both the common and scientific name of each plant,” he says. “I used the same spelling as Faulkner used in his writing, so you can easily locate it [in his books]. During an interview held at the University of Virginia in 1958, he admitted that he didn’t do any research. Instead he was much like a folklorist, absorbing everything. He would come home and have this total sanctuary, and he wrote it all out to show you this world he had absorbed.”

Today, visitors to Rowan Oak can continue to walk in the fabled footsteps of this celebrated author, and experience firsthand the lush landscape that inspired him.