Why Automakers Flock to This Small Swedish Town Every Winter

From January to April, the population of Arjeplog more than quadruples, as almost every brand test drives its vehicles on the region’s frozen lakes 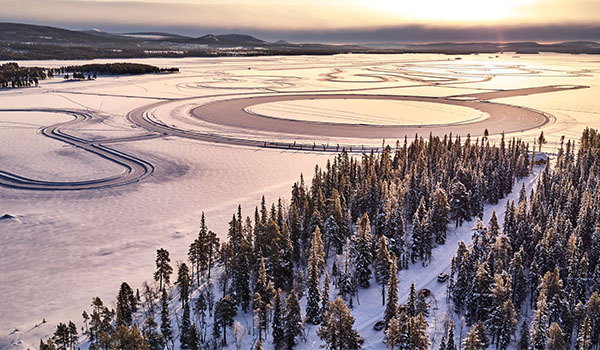 Grooming miles of track is a job that starts long before January, when drivers start taking to the ice. Ice Academy

On a frozen lake in Arjeplog, Sweden, I was about to attempt something that even as a Mainer I had never dreamed about. I was behind the wheel of a Jaguar F-Type sports car, and before me were miles of different tracks to maneuver in a way that’s not intuitive to a driver, especially on an icy surface.

"When you get to the orange cones, punch the gas and turn the wheel," my Ice Academy instructor said, giving me a lesson in drifting, a thrilling but scary technique where you oversteer the vehicle around a corner to slide sideways.

Jaguar's Ice Academy—one of many driving schools in the region—opened its doors in 2016. Most students are driving enthusiasts or owners of Jaguars; occasionally, they’ll get a traveler like me, who is up for a new adventure. I had signed up for three days of driving on a combination of four tracks in January 2020. While the Ice Academy has ceased operation until 2022 due to Covid-19, well over 400 guests graduate from the program in a typical year.

Grooming 30 miles of track is a job that starts long before January, when drivers start taking to the ice. Locals begin prepping the site on Lake Kakel, just east of central Arjeplog, as soon as it gets cold enough, usually in October. To speed up the freezing process and to ensure the lake is safe to drive on, thousands of holes are drilled into the ice, a technique used to artificially “grow” the ice. Once the tracks are ready for the season, plowmen and groomers work around the clock, changing up the surface for different vehicles, until April, when the ice starts to melt.

Each of my sessions on Lake Kakel brought a new track, and each new track a new challenge, until the grand finale on the last day: the circle track. The goal was to “drift” 360 degrees. As a writer, I knew my creative brain could not quite comprehend the physics that go into driving sideways for any extended period of time. At least doing so on purpose. So I consulted various driving instructors and an engineer for advice. The answer I received wasn't so much an explanation in words as it was a puzzling series of steering motions like you'd see in a game of charades.

True gearheads typically clock about 50 miles per hour during the maneuver. I wondered how they even had the capacity to look at the speedometer. At one point, my instructor had his hands on the wheel from the passenger seat, helping me get a feel for the correct position. Together, we made it almost halfway around the circle before spinning out.

To me, it was an Arctic-Circle edition of Fast and Furious. Matt Crane, Jaguar-Land Rover team leader in Sweden, calls the driving experience “’Dukes of Hazard’ in wintertime.”

The tracks on Lake Kakel don't just exist for pleasure driving, though. Turns out, almost every major auto brand tests their vehicles from January to April in these severe conditions to see how the cars will react. The tradition began in the 1970s, when Bosch, a global supplier of all things tech today, purchased a portion of Lake Hornavan, now known as Lake Kakel, after observing seaplanes landing on a runway on the frozen lake. Bosch representatives connected with the founders of Icemakers, who were prepping the runway for the aircraft. The outfit helped to create a track for testing cars and continues to construct and operate winter tracks today.

“When ABS braking first became something you could fit into a vehicle, they needed somewhere wide and open where you could test on snow and ice,” says Philip Talboys, European Engineering Operations Manager at Jaguar-Land Rover. As automakers started implementing Bosch’s ABS system, they flocked to Arjeplog to do so.

Prior to the auto industry settling into Arjeplog, the area saw most of its tourists in the summer, when visitors would come to hike, camp, fish, bask in the midnight sun or visit the Silvermuseet, a museum paying homage to the town’s original industry: silver mining. Now, the population swells from 1,800 year-round residents to almost 8,000 in the winter. Those who “winter” in Arjeplog are mostly automobile employees from around the world and hotel staff from other parts of Sweden and neighboring countries.

According to Arjeplog’s destination developer, Anna-Lena Fjellström Le Goascogne, the town boasts more lakes and reindeer than people. (Lake Kakel is just one of 9,000 lakes in the region.) Moose are wild in the area, but the reindeer all have owners. Those who still live by traditional Sami culture follow the reindeer as they migrate across the land. Since Matt Crane spends a significant amount of time in Arjeplog each season leading the Jaguar-Land Rover team, he has lent a hand helping his local friends gather reindeer when the time comes. The practice of reindeer husbandry has evolved over the years; once a means of currency, clothing and silver transport, now the animal is primarily a food source. Even its blood gets used in a local version of dumplings.

Because of the limited number of hotel rooms, many locals also rent their homes to auto industry employees, which has become a major source of income to Arjeplog residents, who move into something similar to a heated RV. The locals aren’t just landlords though; Crane says they’ve become more like friends and family.

“We are known as no-problem people,” says Fjellström Le Goascogne. “Our hospitality and friendliness were one of the factors why the auto industry chose to start working here.”

Once winter tourism became a trend, locals started to offer guided snowmobile tours, dogsled tours, moose safaris, ice-fishing outings and opportunities to see the Northern Lights. No matter the activity or season, locals like to make coffee and food over an open fire and share this custom with each other as well as guests.

“Much more focus has been put on being good hosts, instead of just offering nice sceneries and experiences,” says Fjellström Le Goascogne. “One could say we started to take the tourism business to a new professional level.”

Automobile manufacturers have had a significant economic impact on the village. Jaguar alone employs 20 to 30 people from the local community, who work as track controllers, plowmen, site coordinators, cleaners, receptionists and more. Since each automaker has its own warehouses, driving schools, and tracks that need grooming on Lake Kakel and beyond, these numbers add up. The industry’s total economic impact on the Swedish Lapland amounts to $180 million each year, and 88 percent of all car testing in the region happens in Arjeplog.

“A lot of cars wouldn’t be on the market if not for Arjeplog,” says Talboys. "For such a small, remote place it’s amazingly important to the industry.”

Beyond the mutual appreciation between automakers and locals, I also found a charming camaraderie between competing brands. In the auto industry, the unwritten rule is that you don’t take pictures of prototype vehicles. Phil Jones, lead driving instructor for Jaguar, tells me at testing sites in other countries, brands usually have security near the prototypes—but in Sweden, there is simply no need.

“We all look after each other here,” says Jones. “If someone slides off the road, even in a prototype, you stop and help. If that happens somewhere else in the world, as the driver, you wave someone off even if that means you’re stuck out there for days.”

This year, although the population swell is not as great in terms of attracting winter tourists, automakers are still testing in Arjeplog with the same unwavering help from locals. Upon arrival, social distancing and quarantines have given new tasks to local receptionists who work with Jaguar-Land Rover engineers and staff. One of those jobs is grocery shopping. Crane says this support has been priceless, joking that he has upped his food shopping game so he won't be judged for living on tea and biscuits.

“We give so much thanks to the local crew who makes all of this possible,” says Talboys. “I always think I’m lucky to see somewhere in the world like Arjeplog. It is not somewhere I would’ve gone had it not been for my job, and it’s a privilege to return each year.”