What the Haunting ‘Inner Passage’ Represented to the Enslaved 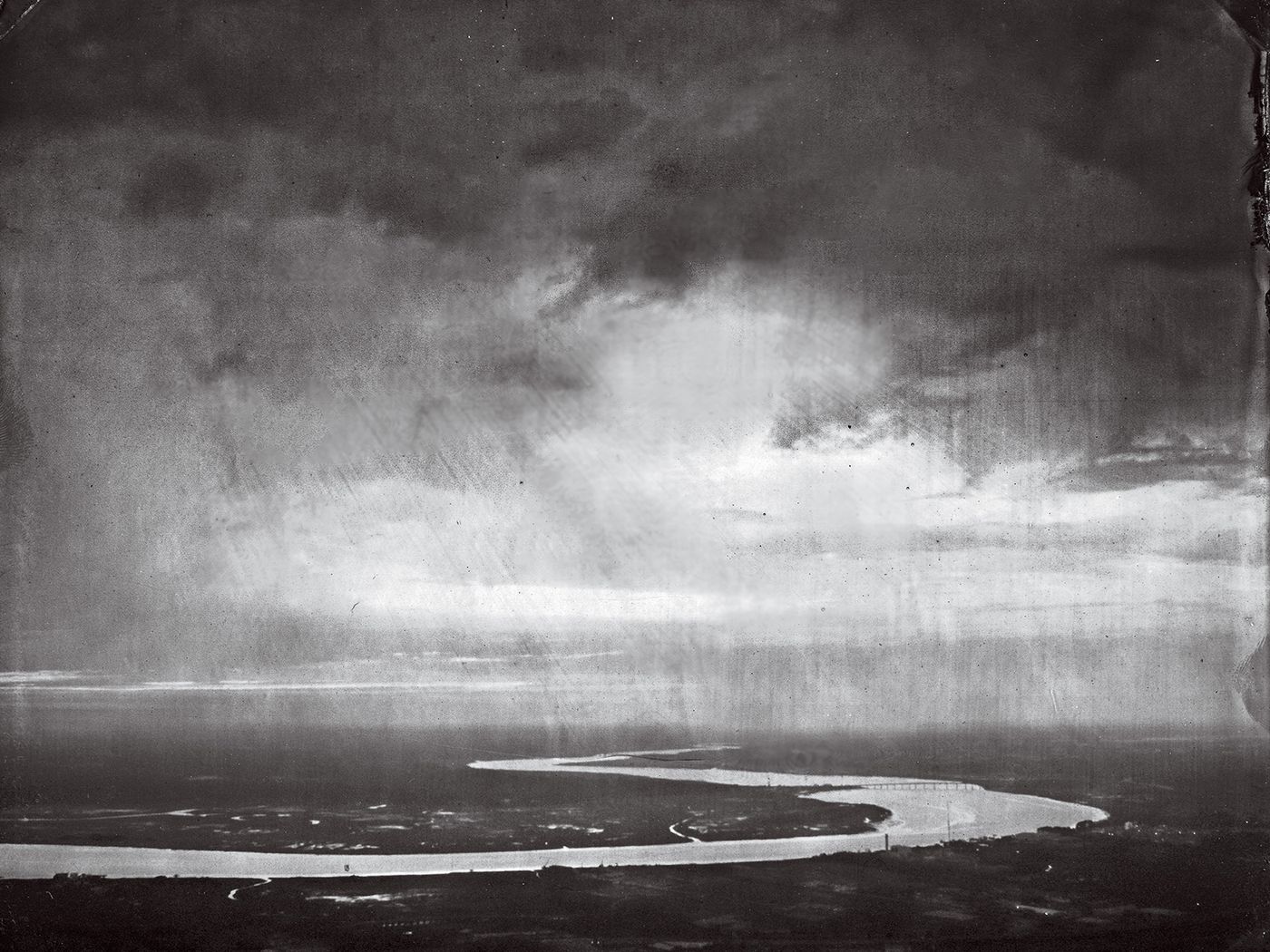 An aerial view looking southwest from Charleston, with the Stono River wending through the landscape. Virginia Richards

The Lowcountry is emerald green and lacing gray. The landscape is visceral. Movement never ceases. Look from the sky and it appears as though the water has run veiny through the earth, making islands of a common ground.

To get from Charleston, South Carolina, one of the old cities of the Lowcountry, to St. Augustine, Florida, one can go along the coastline, traversing the shallow waters of the Atlantic Ocean. There’s another waterway, though—an interconnected series of rivers and hand-dug canals made possible because of slavery. It is slower, safer and a historical treasure. Virginia McGee Richards has spent the past ten years studying and documenting it. She calls it the Inner Passage.

When I speak to her over Zoom, she is gracious, even self-effacing, but her curiosity is luminous. I see her eyes travel up into the sky of her imagination as she describes the majesty of the land. Her project includes interviewing local residents and editing a poetry collection written by local students reflecting on the history of the Inner Passage. She has collaborated with historians like Duke University’s Peter H. Wood, the author of a seminal book about colonial South Carolina called Black Majority. Richards herself is a diligent researcher, a historian and an environmental lawyer as well as an award-winning photographer. To make these images, she used a mid-19th-century photo process called wet-plate collodion. “My hope,” she says, “is that images can convey a landscape scarred with secrets: river baptisms, planting seasons, torture, dancing, prayers, African dialects, poverty, massacres, lynchings. The land remembers but cannot speak. By documenting the Inner Passage, I want to give the land a voice.”

She swam its waters first. Immersing herself near her home in South Carolina became a ritual as she began to photograph the area and uncover its story. What she found was under-recognized and fascinating.

The public’s image of the South tends to hover in the 1800s, when cotton was king. But the Inner Passage belongs to an earlier, colonial Southland—a region that was part of America’s becoming. It was often quite unbecoming in the process. Starting in the 1600s, British settlers forced enslaved people to build and maintain these waterways to support trade in deerskins and timber, and later rice and cotton.

“These men shoveled mud through malarial swamps while battling snakes and alligators in intense heat,” Richards says. The passage grew to be 300 miles long and was eventually incorporated into the Intracoastal Waterway, which still exists today.

As early as 1687, the Inner Passage also became a route for Black freedom-seekers. Long before the Underground Railroad opened up a pathway to the North, enslaved people in Charleston were paddling wooden boats through the Inner Passage, fleeing southward to Spanish-owned lands. Once they reached Florida, they were granted their freedom in exchange for converting to Catholicism. Their descendants were able to live there in relative liberty until the 19th century, when Florida was annexed by the United States.

As a daughter and a student of the South, I look at Richards’ images and find myself having flashbacks of events I never experienced firsthand. Take the live oaks growing along the canals. Over the course of 200 years, Richards says, these trees “absorbed the sight of angled elbows against the land, backs arched, as hundreds of men sacrificed their lives to carve canals from the swamp. The trees saw Black men burrow so deeply into the gray marsh that they disappeared into it.” These oaks are the only creatures still alive today that witnessed these sights, and by looking at them, we witness their testimony. They tell us of the people who sheltered in their branches, or behind their thick brown trunks, breathing heavily, wet with sweat, dew on the grass and moisture in the air. There is one oak whose trunk has grown around cinder blocks. Nature is a living graveyard. What has eroded is tended to by what remains.

This dance between past and present moves through the entire collection of images. A photograph taken on the banks of the Stono River recalls the 1739 uprising of enslaved people referred to as the Stono Rebellion. Led by an Angolan man named Jemmy, the group was defeated at Edisto River. Its members were killed or sold in the Caribbean. More repression and rebellions followed in slave societies everywhere.

In a photograph taken near Jacksonboro, South Carolina, we see the ruins of the Pon Pon Chapel of Ease, erected in 1725 and replaced in brick in 1754. That church was then destroyed by fire in 1801 and came to be known as Burnt Church, a name that was classically Southern—idiosyncratic and matter-of-fact. It carried that designation until it was rebuilt between 1819 and 1822; then it was mysteriously destroyed again in 1832. For nearly two centuries, the ruins have remained.

So do the praise houses, simple wooden structures built by and for enslaved people. The church was the first institution of Black American life, before enslaved people had property or even a right to domesticity. Praise houses served as places of religious intercession, exhortation and devotion, and also as sites for conflict resolution, political development and education. The contrast between the rubble of the Pon Pon Chapel of Ease and the carefully maintained praise houses makes me think of two words: ruins and ruint. Ruins are detritus. Ruint, a Southern vernacular term, is a reference to having been destroyed by disgrace and, often, sexual violation. To be ruint was one of the many forms of violence experienced by the enslaved. The praise house served as a place for spirit cleansing and new life. Many of these structures are still being sustained with tender attention today.

The Inner Passage winds through the Combahee River, a small blackwater tributary that is good for bream fishing. Some of these fish are red breasted, gleaming like fire when pulled up from the water. The Combahee is where Harriet Tubman, the woman called Moses, led Black Union soldiers as they freed 700 enslaved people. Three Union gunboats traveled up the river, covertly gathering information along the way. The freedom-seekers were waiting for them when they stopped at appointed locations. Richards’ photographs taken on the banks of the Combahee function as a subtle memorial.

The scenery is haunting when you think about the greed for wealth, the trade in flesh, the way a body could be swallowed up by the landscape.

But this is a pretty place. Nature has covered the grounds where people died in war or fell to their knees in tears for freedom with a lush carpet of flora. The fauna still dance. The waters still flow. The people who live on the islands of the Inner Passage also carry history in their faces. Francis Maybank, a white man and a native of Charleston and Jehossee Island, stares at Richards’ camera with pale eyes, a sun-weathered face, white hair combed back. Kathy Holmes, a native of James Island, is a Black woman with chiseled features, hair drawn back, hooded eyes, gleaming skin. They belong alongside each other in any honest story of what this place is. Witness them both fully and our maps become more accurate, our national story truer.

And then there is the image of a little girl, Anilena Hammes, barely out of toddlerhood but with a knowing face and a stern brow. Her ancestors first arrived in Charleston in 1683. She is the inheritor of a place that is fraught and breathtaking. To borrow from that sagacious thinker, James Baldwin, I wonder what will we do with all this beauty. What will we do for her. The land insists that we tell the whole story, riotous and chaotic, beautiful and terrible. Richards’ photographs remind us to hold its legacy with care.

Virginia Richards is a photographer and historian whose current work investigates the South Carolina Lowcountry.

Imani Perry's newest book is South to America: A Journey Below the Mason-Dixon to Understand the Soul of a Nation.