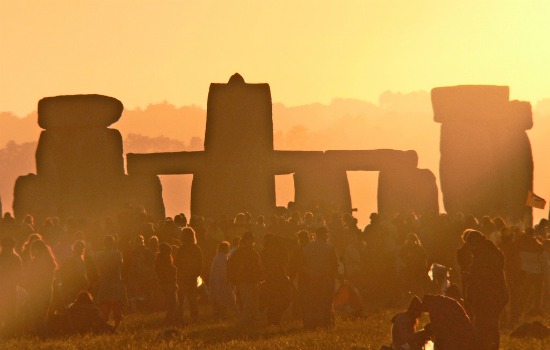 The sunrise on the summer solstice is old news to the slabs of Stonehenge, but for thousands of gatherers, it's reason to party each June. Photo courtesy of Flickr user tarotastic.

Seems like just weeks ago that I was hustling to get the dog walked and my bike ride in before dusk fell at 5 p.m. Now, the sun is still shining two hours after dinnertime. You've got to love the summer, which technically hasn't even started yet. For northerners, the first day of summer comes June 20 this year. I'm in Spain, at above 40 degrees latitude, where the solstice sunrise will come at just past 6 a.m. and the sunset at just before 10---and it won't be dark until well past 11. My celebration plans are to camp on the highest mountain around and, well, I'll be honest: I'll probably conk out before it's dark. A tame party, I know---but here are a few of the grander ways that others of the world are honoring the longest day of the year:

Stonehenge, England. Hippies, pagans and partiers gather by the thousands at the famed and mysterious stone cluster in Stonehenge to watch the sun rise over the slabs---which occurs at precisely 4:52 a.m. each year. The event drew 18,000 people in 2011, of whom 20 were reportedly arrested for drug-related offenses and public disorder. The year before, 20,000 people stood vigil until daybreak, while 36,000 had the patience in 2009. Bad weather in recent years may explain the variation in numbers. From 1972 to 1984, a large free music festival was held at Stonehenge in June, with the event climaxing on the solstice---but the Stonehenge Free Festival was getting out of hand, by authorities' standards, and in 1985 it was banned. But the sun still rises, and today, though it's a tamer time than in the past, the solstice gathering at Stonehenge remains one of the largest summer kickoff parties on the planet.

Norway. It needn't get dark to party, as the annual Midsummer's Eve bash in Grimstad, on the Norwegian south coast, proves. In the constant light of dusk, or dawn, or whatever you call that twilight state that will persist for several months, Norwegians and others from afar drink expensive beer and dance to the music while the solstice sun plods along the horizon. The Midsummer's Eve party is generally the biggest Scandinavian holiday of the year and a time of bonfires in honor of Saint Hans, live music and street feasts of sausages and kebabs. Alcoholic drinks are notoriously expensive in Scandinavia, and locals generally get their bloodstream warmed up with cheaper stuff at home before hitting the bars. Not far away, and just a few days later, some 50,000 people are expected to amass on the island of Tromoya for the Hovefestivalen---or Hove Music Festival---a four-day rock fest scheduled for June 26 to June 29. Three stages will feature numerous performers, including headliners The Shins, Skrillex, Snoop Dogg and more. The ticket price includes a campsite.

Mount Shasta. New Age pagans who believe that California's most massive mountain is inhabited by aliens called Lemurians will gather as they do each year on the summer solstice to meditate, generate love, share hope, generally be in awe of the great mountain and---as stated on the event's blog site---"receive an incredible download of energy sent from the Crystalline Council of Light." The blog also says that 2012's will be "the most potent solstice experienced on your planet in aeons." Most of us don't know what that means, but the party sounds like one worth, at least, standing by to watch. Anyway, Mount Shasta is truly a cathedral of nature, and the namesake town that dwells at the base of the volcano is one of the most charming, if quirky, in California, including a restaurant called the Goat Tavern with several dozen beers on tap, a natural foods grocery store, fast access to the Upper Sacramento's hot fly fishing, book shops where you can learn about the aliens in the mountain and free camping just uphill in the National Forest. Might as well go hiking on the mountain while you're there, perhaps even a midnight ascent on the solstice---and for a real gas bring skis and have a fast trip down.

Michigan. On June 20, it's weird beers until well past sundown at one of Michigan's most outrageous breweries, Kuhnhenn Brewing Company, known for such oddities as the creme brulee java stout and the beet-sugar triple bock. The annual summer solstice party (counterpart to the same brewpub's winter solstice event) begins at 11 a.m. and in years past has attracted hundreds of people with promises of inventive and festive beers brewed specially for the party. Expect standing room only if you arrive late, a barbecue if you're there midday. Scheduled for the taps are 12 different wheat beers, including four sour ales and one spiced with habanero peppers. A colorful variety of herb-infused meads (think lavender, hibiscus, saffron, etc.) and several other strong beers will also be available by the bottle. The event gets a bit tribal as the night goes on, with hourly chants hailing the wassail mulled mead, anticipated every year. Meanwhile, beer geeks who know each other by web forum code names meet in the parking lot to trade treasured bottles from their cellars. Sip slowly. The beer pours until 2 a.m.

Spain. The summer sun is a beast to be feared on the scorching plains of La Mancha and southward, but on the north Spanish coast, frequent clouds and rain make the sun a treasure to bask in---and on June 23, the night of San Juan, summer kicks off each year in Spain with bonfires and all-night celebrations. In the northwest city of A Coruña, locals and visitors occupy their days at street festivals, with music and dancing and sardines sizzling on the grill, while the real partying is yet to begin. As the sun nears the horizon, crowds assemble along the cliffs and beaches to watch it sink into the Atlantic later than nearly anywhere else in Spain. Cider flows and bagpipes sing (there seems to be a relation between culture here and just north, in the rainy isles of the United Kingdom) as revelers light the bonfires. Traditional practice is to jump over the flames three times as a purification stunt. By midnight, hundreds of fires are burning, and the Atlantic glowing in reflection.

Alaska. In Anchorage, thousands of people run for 26 miles in the Midnight Sun Marathon to mark the summer solstice. The race, set for June 23 this year (a Saturday) will be accompanied by a half marathon, as well as two even shorter runs. Further north, in Fairbanks, many sun-loving sports fans come out to watch the historic midnight sun baseball game, first played in 1906 and still played today by the Alaska Goldpanners, without lights and only the sun on the horizon illuminating the ball. There's no sun-in-the-eyes excuse for sloppy right-fielders on this game day. And further north still, sun-seekers annually gather at Eagle Summit in the White Mountains. From here, one can see over the Arctic Circle and, on the solstice, watch as the sun dips, dips, dips---but remains just above the horizon---the first time in the year that the great ball of fire doesn't entirely vanish. It's a spectacular reminder of the Earth's tilt and its motion---but let's not all lose our heads in celebration, because when we wake up on June 21, it's all downhill to winter.

And for some summer solstice science...

If you happen to be in the Bahamas, or in Mazatlan, or anywhere else roughly on the tropic of Cancer, try this: Prop a broomstick into the ground, directly upright. At noon, the sun straight overhead, that broomstick will cast no shadow. And if you chance to be on the equator somewhere, then take that broomstick and tilt it due north 23.5 degrees. At noon, no shadow. Or perhaps you're in New York. Then subtract 23.5 from your latitude of about 41. Now, facing due south, lean your broomstick forward the difference of 17.5 degrees. At noon on the solstice, the sun---as high as it ever gets in the New York City sky---will make no shadow of that broomstick. And for all you readers currently at the north pole, well, you're in a funny place. Because technically, there's only room for one of you on the pole itself. Moreover, every direction is due south and you're standing in every time zone at once. Weird. So, just tilt that broomstick toward the ground, any direction, at 66.5 degrees. When its shadow shrinks to nothing, you know it's noon somewhere. Neat stuff!

View How to Celebrate the Summer Solstice on Howcast