"The Viennese waltz is very simple,” explained Barbara Ehrenhauser, my teacher at the esteemed Tanzschule Elmayer in the Innere Stadt, or center city, the cultural heart of Vienna. Barbara was young, statuesque, and authoritative, with brunette hair pulled back neatly and a crisp white button-down blouse tucked into a navy skirt. She reminded me of a flight attendant. I instantly felt in good hands. Barbara would handle any in-flight emergency: Viennese waltzing, I was about to learn, happens at jet speed.

The ball season was about to reach fever pitch on New Year’s Eve, before winding down in late spring. I’d come to Vienna to learn to waltz  in advance—just barely—of The Hofburg Silvesterball, the traditional New Year’s Eve event. Being half-Austrian, attending a ball in Vienna was something I’d always wanted to do, and given the increasingly conflicted social currents in Europe, I felt a nascent sense of urgency—a kind of now or never moment.

“It’s just turning, turning, turning,” Barbara said reassuringly with a faint smile. “But it’s much, much faster than the English waltz.” In fact, the steps are the same, but they’re executed in double time, or more, in the Viennese version: 180 beats per minute cruising speed, versus 90. Those romantic period movies wherein the doomed couple waltzes around the majestic ballroom while the scenery blurs were alarmingly accurate I soon discovered.

The Silvesterball is held in a wing of the Hofburg Palace, once the center of the vast Austro-Hungarian empire, ruled by the Habsburgs. “Until 1918 the extensive palatial complex at the heart of Vienna was the political centre of the monarchy. Today it fulfills the same role for the democratic Republic of Austria,” reads the official Hofburg website without a trace of irony. The palace’s Festsaal, or ballroom, alone covers almost 11,000 square feet.

“It starts slow, and then accelerates . . . three steps per second,” Barbara continued. “Two seconds for one whole turn: one, two, three, four, five, six. It’s one of the fastest dances in the world.” There’s no time to think; the steps have to be instinctive. Austrians typically begin learning to waltz in their early teens, so they have plenty of time to get inside the rhythm. The debutante cotillion, a prelude to the main ball event, remains a time-tested way for young guys to meet girls in white satin dresses.

We started with the more forgiving English waltz. Barbara selected a Billy Joel song, “New York State of Mind,” modified in tempo from ballad to waltz. “You’re dancing a kind of box, so in English it’s a box step and in German it’s a Karree,” Barbara explained. “Right, forward, side, close; and back, side, close. A box always turning to the right.”

The man leads, his elbows held away from the body, up high. His left hand holds his partner’s right hand; his right hand sits firmly on the woman’s left shoulder blade. Their pelvises touch, right side to right side, like magnets. The hold is tight. He looks to his left, and so does she. They’re definitely not gazing into each other’s eyes. That can only happen during the Pendel, a pendulum-like back-and-forth holding pattern invoked strategically when one is getting flustered or dizzy, or the crowd makes it hard to turn. 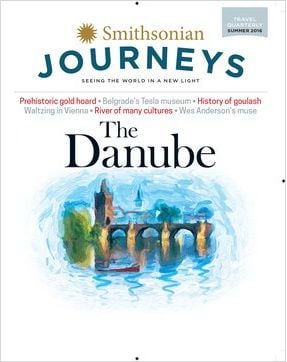 Twenty minutes later, Barbara decided we were ready for the Viennese waltz, and played “Que Sera, Sera.” “Go back with the whole body, otherwise I can’t go forward with you. Keep on turning, keep on turning,” she pleaded. “Let your right shoulder go back! The heel turns away from the body. Stay straight, don’t bend your legs. Normally, dance people don’t do silly movements.”

Barbara’s frustration mirrored mine; I tried to focus on her instructions, but was held captive by the ridiculous lyrics pouring out of the sound system: “Will I be pretty? Will I be rich? Here’s what she said to me…”

“The arms of the gentleman are like the frame of the picture,” Barbara said sharply, snapping me out of my reverie. She’d cranked up the speed again to 180 beats per minute. “They have to stay fixed—otherwise the picture will fall down.”

Our lesson was drawing to a close, and I felt apprehensive. Vienna being a historic center of diplomacy, I explored the possibility of handing over the reins: ”Can the man ever ask the woman to lead?” I inquired, hoping for a sort of life preserver to forestall a hard floor landing.

One, two, three. One, two, three. The counting of the beats, and the rhythm of the music reverberated in my head all night inhibiting sleep. “Que Sera, Sera” collided with the “The Blue Danube;” Doris Day went note-to-note with Billy Joel.

My initiation had begun.

The next morning, 36 hours away from New Year’s and counting, I crossed the Vienna River bridge for the Tanzschule Thomas Kraml in Vienna’s vibrant 3rd district. If Elmayer, located in the shadow of the Hofburg Palace is evocative of Old World Vienna, Kraml is more show biz and media savvy. Judith Haidacher, my dance instructor there, was a younger, slimmer, Tyrolean version of Britney Spears and infinitely more charming. Though she’d studied jazz dance, she preferred dancing with a partner, “because it’s more emotional, it gives me more.”

The Viennese waltz evolved from the popular late 18th-century folk dance, the Ländler, a boisterous affair in three-quarter time, often accompanied by stomping and hollering, Judith explained. As the more adventurous Viennese high society were exposed to it on holidays, they refined the dance, giving it intimacy and flow. Couples faced one another in an embrace, rather than standing side-by-side. The upscale version became wildly popular and played a role in social diplomacy during the banquets and balls integral to brokering a peace plan for Europe during the Congress of Vienna held from 1814 to 1815. “Soon, everyone was dancing it,” Judith said.

Just hours before the Silvesterball, a waltz rehearsal was held for ticketholders, with Thomas Schäfer-Elmayer himself presiding. Herr Elmayer, sleek as a silver fox, a cross between Bob Hope and Maurice Chevalier, was unflappable.

“The nice thing about Viennese waltz is that it’s the easiest dance one can imagine—for us Viennese,” he said to the mostly foreign crowd, after rattling off welcomes in half a dozen languages. “All you have to do is repeat the same six steps all the time,” he added. “Right foot forward, for the gentlemen; left foot backward for the ladies. Now let’s try to dance together. It should be a very close dance position.” 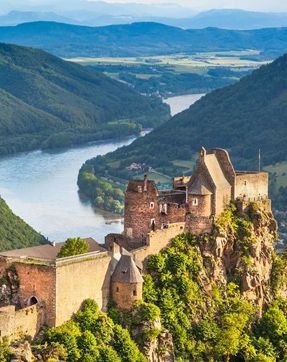 Unpack once and enjoy an unhurried cruise on the Danube River through the heart and heritage of Europe from Sofia to Prague. 16 days from $4,445.

I searched for a partner, and my eyes fell upon a young blonde dressed in a black-ribbed, wool sweater tucked into black stretch pants and black boots. Morgan was American. She hadn’t waltzed before, and I’d already had two lessons. It was awkward, but we managed something suggesting a waltz. Most of our time was spent dodging other couples careening like bumper cars at the Prater amusement park. The rehearsal lasted an hour, just long enough to confirm how much one didn’t know.

“Only” 2,000 people were expected at the Hofburg that evening, rather than the usual 4,000 to 7,000, because the dinner tables took up so much space. But my Viennese friend Erika Jakubovits, who has expensive tastes and a jet-set work schedule, told me neither she nor her friends would be caught dead at a ball dinner. “It’s simply too much time in one place,” she explained. “You either have dinner at a friend’s home or at an appropriate restaurant,” arriving at the ball no earlier than ten o’clock.

At 10 p.m., I was among many hundreds amassed in a Hofburg entrance hall waiting for dinner guests to finish their strudel. It was a holding pen for a crowd that had overwhelmingly failed to adhere to the strict dress code on the event’s brochure and website: “Full length ball gowns for the ladies,” it stated, warning that white dresses “are traditionally the preserve of debutantes and younger ladies.”

Almost none of the guests wore ball gowns with classic width and volume (to make the point, the website featured an illustration). But even the Viennese have discarded the gown-in-full-bloom directive, in favor of the more form-fitting, according to Erika.

Opera gloves, while not mandatory according to the rules, should be coordinated with the length of the sleeve: the longer the sleeve, the shorter the glove. For men, it was either tails or a tuxedo, although military dress uniform was also acceptable. Four young Frenchmen wore theirs, and were Fräulein magnets par excellence. Talk about diplomacy.

A quick survey noted that upscale Texans were quite well represented among a smattering of guests from the American South, including New Orleans. Most elegant were the Japanese. While all ages were present, only two genders were in evidence: male and female, nothing in between. Austria is a conservative country, and in public, everything, even gender-bending, has its proper place. (Recently a few crosswalk signals in Vienna were changed to include gay couples in silhouette on the red and green lenses.)

Finally, we were allowed to ascend the grand staircase and enter the labyrinth of anterooms, chambers, and ballrooms (two, plus a small, loud disco). The Festsaal, its massive crystal chandeliers hanging from a dizzying height, saw most of the action, with Herr Elmayer as master of ceremonies.

First the debutantes (coached at his school) had their cotillion, (“Look, there’s my Liesel!” shouted a proud father in German from his box seat); then the Austrian and European Union anthems were played. At last, Elmayer called out the magic words, “Alles Walzer” (everybody waltz), and the crowds poured onto the floor.

Though at times the scene unquestionably resembled a cruise ship—Cunard rather than Carnival—people were having fun. Cash bars served mojitos and caipirinhas as well as sekt (sparkling wine); food stalls sold wurst and Sachertorte. There was a wire “wish tree” on which a guest could clip an index card written with their New Year’s resolution. Many mentioned world peace; the French mostly wrote about finding love, “…trouver le vrai amour.” Americans had a wider agenda and seemed predisposed to writing interminable lists.

Despite intensive coaching, I doubt I advanced the standing of the waltz. I danced with one woman content to try the Pendel for a few moments after we were nearly crushed by determined dancers circumnavigating the main floor. Dance floors at Vienna balls are typically populated by the brave or experienced. I have enough time between now and my next ball to be both—and I shall.

The Vienna tourist office promotes the city, somewhat ominously, with the tagline, “Vienna, Now or Never,” as if its future were in doubt—perhaps understandable when one considers its shadowed past. Seismic changes were set  in motion with the collapse of the Austro-Hungarian empire in 1918, as a result of its defeat in World War I, and continued with its annexation during World War II to Germany.

Yet, impossibly, almost a century later, this once imperial city by the Danube still retains the trappings of a great empire: its magnificent palaces, opera houses and theaters, great museums, and grand boulevards are very much alive. A reminder of past glory, to be sure, but also a dynamic setting for the present.

The Viennese believe that every waltz deserves a shimmering backdrop, and Vienna, arguably, is the most glittering and shimmering setting of all.

I was reminded of the Elvis song:

It is so perfectly Viennese.

Mark Ginsburg has been a columnist at Vanity Fair and a frequent contributor to Architectural Digest and Interview magazines. He is currently working on a biography of his mother, the late Ina Ginsburg.