Like so many other American men during the Vietnam War, Chuck Forsman found himself drafted by the U.S. Army. After completing his tour of duty in 1969, he wasn’t sure if he would ever set foot on Vietnamese soil again. Yet the country beckoned him, and decades later, he returned—only this time around, he was armed with his paintbrushes and camera rather than a government-issued rifle.

In the early 2000s, the accomplished landscape artist and author made biannual visits back to Vietnam, spending months at a time crisscrossing the country largely by motorbike and exploring areas that most visitors never experience. Through his travels he quickly discovered the resiliency and hospitality of the country and its people, finding that Vietnam for him was no longer solely defined by the war.

The result is Lost in Vietnam, a new book featuring some of the hundreds of photos Forman took over the years, accompanied by an essay about his time as a soldier and an opening essay by Le Ly Hayslip, a Vietnamese-American writer and humanitarian who grew up in Vietnam during wartime.

“I created this book not for Vietnamese but for Americans,” says Forsman. “I wanted to teach Americans about current Vietnam so that way when they [heard] the word 'Vietnam,' they wouldn’t automatically think of the war.”

Smithsonian.com talked to Forsman about his visits back to Vietnam and how his experiences helped him find closure.

What made you decide to return to Vietnam years after the war?

There’s a passage in my book that asks, 'What does one do when you give up on forgetting?' When I returned from the Vietnam War, I hated the war; I hated the whole thing. But I was ambitious and life took off again as if nothing had happened, so I repressed [my memories]. It was healthy to do and it got me going, but [those memories] don’t go away—they stay there. I finally decided I needed to work this out and go back, so decades later I did, and my family wanted to go with me, which was wonderful. I finally had my catharsis.

The first time you went to Vietnam was as a soldier and now you’re an artist and photographer. How has your perspective of the country changed?

When I returned, the change actually thrilled me to death, just seeing Vietnamese people everywhere and not just soldiers and oppression. Just seeing Vietnamese buzzing around on their motorbikes, becoming prosperous and being in charge of their own country. I knew this was happening, but to experience it in person [helped solidify it for me]. It especially struck home when I returned to Da Nang, where I was stationed. During the war, U.S. soldiers had nearby China Beach (My Khe Beach) all to ourselves, but when I went back to the beach with my family I saw nothing but Vietnamese having a wonderful time in that beautiful place; it was a thrill to see.

During your visits you traveled largely by motorbike. What was the significance of choosing that specific mode of transportation?

I spent most of my time riding a motorbike, but for longer distances I relied on buses that traveled between Saigon and Hanoi, which enabled me to get off and on at designated places, and then I would rent a motorbike for $5 a day. This gave me access to places that a car couldn’t, like roads that eventually turned into trails. As a landscape artist I would see something interesting and a motorbike allowed me to stop and experience it, so I found myself spontaneously stopping all of the time. Another thing is it’s hot and muggy there, so you get on a motorbike and dry out in a hurry. It’s exhilarating, but you can’t relax, you have to pay attention. I saw a lot of awful accidents, and there were times when I thought, 'Lord, get me to this place.' Also, when you show up on a motorbike rather than a car or a bus, you’re not so remote from the locals and they’re friendlier to you. 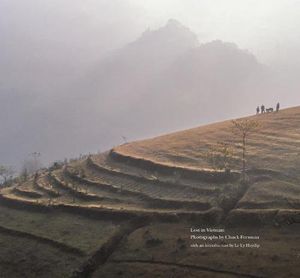 Lost in Vietnam chronicles a journey, not a country. The photographs were taken on visits averaging two months each and two-year intervals over a decade. Chuck Forsman traveled largely by motorbike throughout the country—south, central, and north—sharing his experiences through amazing photographs of Vietnam’s lands and people. His visual journey of one such veteran’s twofold quest: the one for redemption and understanding, and the other to make art.

Was there one experience in particular that stood out to you?

One morning I woke up exhausted, dejected and homesick, and the weather was rainy and cold. I was staying in Tam Coc in the province of Ninh Binh, where you can take boat rides through rice fields and tunnels. I forced myself out of bed, defiantly got on my motorbike and headed to a nearby cave pagoda. I thought it would be interesting to see, and might also restore my spirits.

[As I exited the cave I bumped into] two women who asked me for money. At first I thought that I misunderstood them and that I hadn’t paid to enter the cave, so I paid them and they motioned for me to follow them. Ordinarily I’m very guarded about this sort of thing, but this time I figured I had nothing to lose. One of them said 'boat,' so I followed them and we got into this tiny little boat and set off, paddling through these beautiful rice fields and weaving between karsts [limestone towers]. Then we headed straight for a wall. As we got closer, I saw a tiny opening, and we had to duck our heads to enter. The women turned on lamps, and the cave opened up into a large, very dramatic chamber with stalactites. We went through a tunnel and emerged into a hidden cove and pulled up to an island with a little shrine. We did our offerings, and were just sitting there quietly. Then one of the women whispered to me in English, 'Vietnam, very beautiful.' And I told her 'thank you' in Vietnamese. It was a beautiful moment, and my spirit was restored.

What were some of the challenges you faced during your travels?

This was all very dependent on where I went. One of the things that struck me about the Vietnamese is the concept of privacy. In some instances, their generosity to me as an American was up-front and I would be surrounded by people curious about me. But then there were remote villages where people wouldn’t even acknowledge my existence.

The Vietnamese who live in the lowlands generally all speak Vietnamese, but when you go into the highlands and the northern mountains, they’re mostly tribal and isolated from other Vietnamese, so they have very distinct cultures and traditions and react differently to you. If I [were] in a major city, the locals weren’t surprised to see a white person, there was no problem whatsoever, but it was some of the outposts where I would run into trouble. Sometimes I could detect it just riding into a town; it felt oppressive. In some cases, they were still run as if it were the Cold War with old-line communists who were very corrupt and oppressive. You got a taste of what it was like after the war for a lot of years before they had what was called 'Doi Moi' that opened the country up to the outside world.

Le Ly Hayslip wrote an opening essay for the book. Why was it important to include her perspective?

I created this book not for Vietnamese but for Americans. If I were to try to teach the Vietnamese about Vietnam, that would be very presumptuous—so I wanted to teach Americans about current Vietnam so that way when they hear the word 'Vietnam,' they wouldn’t automatically think of the war. Le Ly has this perspective that very few people have, because she grew up there and lived as a peasant. She endured incredible things, far more than any of us will ever experience in our lifetimes, and then she came to the United States. I tried to understand Vietnam by photographing it, but she really understands it, and I love that her essay brings in her perspective.

What is something about Vietnam that many people don’t know about, and that you hope they learn from reading your book?

I think that cultures all over the world could learn something from Vietnamese tradition. They have this attitude about forgetting, so there’s this yin and yang of what to remember and what to forget. They want to remember things that are important to remember and they want to forget things that are important to forget. Everyone who I spoke to who has visited Vietnam is amazed at how resilient it is. Soldiers I know who went back were astonished by how they were welcomed, even by former Viet Cong. And it has to do with that attitude about forgetting; they know what to let go of. I think it’s a remarkable trait, and we could all learn from it.