The Colorful History Behind Panama’s Mola

Made by hand, this clothing staple is an important piece of the country’s rich culture 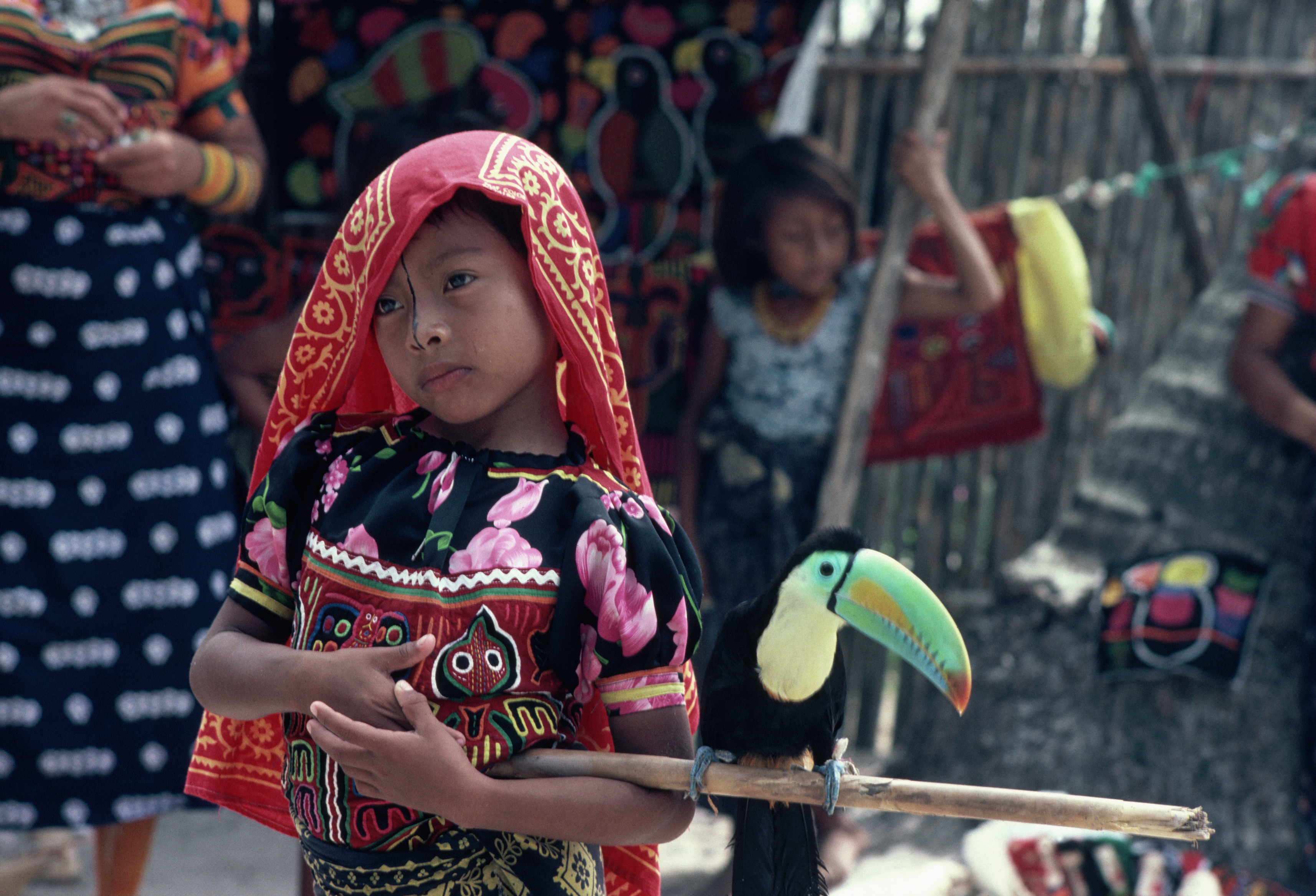 The Guna, an Indigenous group residing in Panama and parts of neighboring Colombia, have been creating colorfully embroidered clothing for centuries. Bettmann/Getty Images

Panama is a nation full of colorful imagery, from the aquamarine seas lapping at the country’s coastlines to the deep green canopy of rainforests shrouding its interior. But perhaps the most iconic example of its vibrancy is a traditional garment known as a mola.

For centuries, the Guna (previously known as Kuna), an Indigenous group residing in Panama and parts of neighboring Colombia, have been creating colorfully embroidered clothing. A mola, which translates to “shirt” in the Guna language, is a piece of traditional dress typically worn by women and known for its bright colors and intricate designs depicting flowers, birds, reptiles, animals and other emblems indicative of Mother Nature. The textile art began in the San Blas Islands, an archipelago off the northern coast of Panama that’s part of the Guna Yala Region, where many Guna people continue to live.

While there’s no exact record of when the first mola was made, many historians believe that the colorful custom stemmed from a different form of art that was common within the Indigenous community: body painting.

“At one time, the Guna people used body painting to keep away evil spirits,” says Yanelis Ledezma, a tour guide at the Museo de la Mola (MUMO) in Panama City. “Ladies would draw symbols and signs on the bodies of their family members. The Guna believe that the universe is divided into multiple levels, and that there are no empty spaces, so their designs have to continue from the front to back to keep away evil spirits. Eventually, these same patterns were implemented into the molas.”

Making a mola the traditional way isn’t for the faint of heart, and Ledezma estimates that a single shirt can take anywhere from 60 to 80 hours of labor to sew. To create each garment, women and girls use a technique called reverse appliqué, which involves layering two or more fabrics of different colors and sewing them together, then using a pair of scissors to carefully snip away parts of each layer to reveal the design. Next, they use fabric remnants to fill in each layer, creating a striking geometric-like form. The more layers used, the more complex the final piece, which is adorned with intricate embroidery sewn by hand. Often, the base fabric of a piece is black to help emphasize the other colors and make them pop on the finished garment.

The art of creating a mola is something that’s handed down from one generation of Guna women to the next, with grandmothers and mothers introducing the art form to young girls.

“The first thing I taught my three daughters was to draw the mola,” says Gloria Esperanza Martínez in a video created by the Museo del Oro in Bogotá, Colombia. “When they come home from school, they saw me sewing molas. Then they began to play with molas, whereas Western girls play with dolls.”

While mass-market molas emblazoned with Coca-Cola bottles and other pop culture icons can be found in markets and stores throughout Panama—brands such as Nike have even been accused of cultural appropriation by taking mola designs and emblazoning them on sneakers—most Guna women continue to make their own garments in the same fashion as their ancestors once did. These artists are keeping the art form alive for future generations.

“It takes a lot of time to make a mola,” Ledezma says. “Ladies will visualize the finished mola in their mind and create everything from hand without using any sort of patterns or sketches. They visually know where to put each piece of fabric in the correct place, and the result is a beautiful piece of art.”

Tourists can purchase authentic molas at a number of places in Panama, including Centro Nacional de Artesanías, a handcrafts market, and Mi Pueblito, a park that features folklore exhibits, both in Panama City, according to Culture Trip. Closer to home, several museums in the United States feature molas in their collections, such as Smithsonian’s National Museum of the American Indian in New York City and the William Benton Museum of Art on the University of Connecticut campus in Storrs, Connecticut.

The Museo de la Mola counts more than 300 molas in its collection, with more than half currently on display. It’s also the only museum in the world solely dedicated to the subject. During a museum tour, visitors can learn more about the history of the mola, their cultural significance to the country of Panama and how the Guna people have held fast to their traditions, even when faced with adversity.

This was the case during the San Blas Rebellion (commonly known as the Guna Revolution), an uprising by Guna leaders that took place over the course of three months in 1925. The newly seated Panamanian government attempted (and failed) to strip the Guna people of their long-held cultures and traditions through assimilation after Panama declared independence from Colombia. This included restricting Guna women from wearing their traditional dress and forcing them to wear more modern clothing.

“It was important for them to revolt and defend their culture, including making and wearing molas,” Ledezma says. “To this day the Guna people are known and recognized for their bravery. The mola is more than a piece of clothing, it’s an important part of being part of the Guna community.”