Your rafting trip down the Colorado River was canceled. Your plans for a Tanzanian safari have been postponed for a year (or two or three). What’s left to explore safely? Consider the amazing world right outside your front door.

My personal investigation of this world began in earnest when the waterline to our house froze one winter—and part of the solution involved letting a trickle of water run in the sink until spring. During those six torturous weeks of dripping I realized I had no idea where my water came from or where it went, how my phone call to the water department had gotten to the water department and how the electricity that heated my water was miraculously created.

As I investigated this world, I found myself on a journey as full of mystery, history and intrigue as any other. I became so intrigued, in fact, I wrote a book about it—A Walk around the Block: Stoplight Secrets, Mischievous Squirrels, Manhole Mysteries & Other Stuff You See Every Day (But Know Nothing About), published this fall.

Slip on your walking shoes, and let’s take a stroll around the block while we explore ten things we see and use every day—but usually take for granted.

The recipe for concrete was lost for 900 years.

We manufacture and use more concrete—the very surface we’re walking on—than any other substance on the planet. Worldwide we generate ten billion tons of it per year; 3,000 pounds for every man, woman and child. Pound-per-pound we use twice as much concrete for building as steel, wood, plastic and aluminum combined. If we had X-ray vision, we’d see the sidewalk we’re strolling on is typically four inches thick; a driveway, six; a section of Interstate, a beefy eleven.

The history of concrete follows a bumpy road. The Romans developed the kilns and techniques for formulating concrete over 2,000 years ago. They built some of the most magnificent structures ever created, including the Pantheon which stands today. But with the fall of the empire, so came the “misplacement” of the formula—for nine centuries. In 1414, the recipe was rediscovered in a copy of On Architecture found in a Swiss monastery, and has played a vital role in our lives—and walks—ever since.

As we approach the corner, we sidestep one of those humdrum fire hydrants perched every 400 feet. But look a little closer, and you’ll notice something found in no other place: five-sided bolts. Why? Since five–sided wrenches are found in few toolboxes, this shape makes the hydrant valves and caps more tamper-proof. New York City residents, however, can fill out a special form, and, if conditions are right, fire department personnel will come out, install a temporary low-pressure spray cap and turn on the hydrant for your neighborhood’s cooling pleasure.

If we dig a little deeper, we’ll discover the underground history of this oft-ignored device. The very first water systems were made of hollowed out logs. When a fire broke out, firemen would often dig down, drill a hole in the wood pipe, then bail or pump water out of the pit to dowse the fire. When the fire was out, they’d force a long stick into the hole to plug it, then leave the other end extending above ground so they could easily find it later. Thus the term fire plug. Since many fire departments were privately owned, they’d hire the meanest, ugliest fellow in the neighborhood to guard it. He was “plug ugly.”

The most common street name in the United States is Second Street.

Looking up we encounter signs bearing street names. If you’re strolling in Oklahoma or Arkansas, you’ll find the most popular street name to be Oak; if in Wisconsin, Vermont or a dozen other states, the number one prize goes to Park; in the deep south, Dogwood takes the cake. But all said and done, the most commonly found street name in the U.S. is, strangely enough, Second; Main Street often fills the role of First.

Odd house numbers are customarily assigned to the south and east sides of the street; even numbers on the north and west. In some scenarios, street numbers are “reset” by increments of 100 at each corner; in others, the numbers just keep going up in increments of 2 or 4. In Carmel, California, you’ll find no house numbers at all; all residents have P. O. boxes. For other deliveries, houses are recognized by name or description, such as “the gray house on the corner of Seventh and Lincoln.”

The duration of a yellow light is determined by the speed limit on the street.

We pause at a stoplight and press the “Pedestrian Crosswalk” button. But if we’re in downtown Manhattan, or the heart of most large cities during rush hour, we’re merely doing thumb calisthenics. Only 9 percent of New York City’s "Walk" buttons actually do anything. Traffic light timing is carefully balanced to keep vehicle traffic flowing, and usually can’t be disrupted by a mere press of a button. Pedestrians are always given adequate time to cross but those buttons are programmed into the overall city traffic light cycle.

If we take a longer walk and pass several stoplights, we’ll note they stay yellow different lengths of time. The rule of thumb traffic engineers use is to divide the speed limit by ten to determine the number of seconds a stoplight stays yellow. In a 55 MPH zone, the yellow phases will last 5 ½ seconds. In a 30 MPH zone, it will be 3 seconds. You’ll also notice the lights are red in both directions for 1 to 3 seconds as an added safety precaution.

The front incisor teeth of squirrels grow half a foot each year.

We can’t help but notice squirrels ricocheting from tree to lawn to garden to bird feeder, nuts clenched firmly between teeth. (It’s estimated a squirrel spends as much as 75 percent of their waking day dealing with food chores.) The nuts and teeth are worth examining. A squirrel’s front incisor teeth grow about 6 inches per year—a biological necessity since the constant gnawing and tooth sharpening wears down the teeth quickly.

In regards to nuts: some squirrels, like the red, are “larder hoarders” keeping all their winter provisions in one place, a place they vigorously protect. Other squirrels, like the common gray, are “scatter hoarders” burying their goods in dozens of places, so as not to put “all their nuts in one basket.” They only remember where they buried their nuts for about half an hour—but make up for this nut amnesia with a keen sense of smell.

Nearly a quarter million blue USPS mailboxes have been removed from streets in the past 20 years.

We wave at our mail carrier as he or she walks by, delivering some of the 500 million pieces of mail the USPS handle per day. Though the task seems almost pastoral, the job ranks fourth on the list of occupations with the most number of serious injuries. Slips, falls, dog bites, repetitive motion injuries and vehicle accidents all take their toll.

When your carrier arrives at the postal annex to gather the mail each morning, he or she will find the letters sorted, not only by address, but by delivery sequence in order to increase delivery efficiency. Right-side steering wheels also dramatically increase delivery speed and driver safety. And that big blue mailbox once perched on the corner? Just another of the 240,000 mailboxes removed since 2000; when the Internet came along mail volume began decreasing by 3 percent a year, reducing the need for them.

More than three-quarters of your trash could be recycled, reused or composted.

It’s Tuesday and the neighbors have wheeled their trash and recycling bins to the curb—a miniscule part of the 250 million tons of garbage Americans generate each year. If you were to peek inside the recycling bin, you’d find about 10 percent of the materials in the wrong bin; they’re being “wish-cycled” or tossed in the wrong bin with hopes they’ll be recycled. But these extension cords, hoses, broken plates, batteries and plastic tarps jam the equipment, complicate the sorting process and contaminate the true recyclables. The best mantra is, “When in doubt, throw it out.”

A glance into the trash bin reveals more mistakes. Up to 80 percent of the “stuff” in there could be recycled, reused or composted. If you’re a typical American family, I’d find 15 pounds of compostable food waste and yard trimmings; nearly 20 pounds of recyclable paper, metal and glass; and 5 pounds of items that could have been brought to the Goodwill. 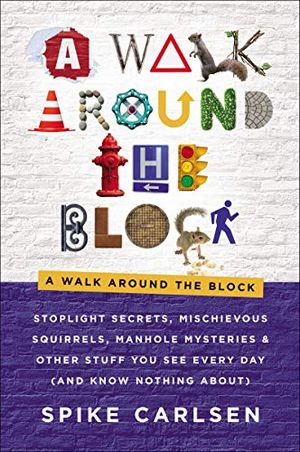 A Walk Around the Block: Stoplight Secrets, Mischievous Squirrels, Manhole Mysteries & Other Stuff You See Every Day (And Know Nothing About)

A simple walk around the block set journalist Spike Carlsen off to investigate everything he could about everything we take for granted in our normal life—from manhole covers and recycling bins to bike lanes and stoplights.

Alleys don’t have to be scary.

We take a short cut through two alleys. The first is drab, weary, almost foreboding—a place we want to go through, not to. But the second alley has a totally different look and feel. It’s been given a name, murals decorate the sides of garages. Some outbuildings have been converted into artist studios and accessory dwellings. It’s been paved with semi-permeable asphalt so rain seeps through the surface rather than flowing into storm sewers. LED lights focus light down where it’s needed rather than lighting up the night sky. And the city has allowed the family restaurant on the corner to set up café tables in the alley to provide outdoor seating during the pandemic. Alleys, when re-imagined, add to the vibrancy of a neighborhood or city.

We stop to rest our weary feet on a patch of grass. If we were to break out a magnifying glass, we’d find each square inch populated by eight grass plants, making an average size yard home to about 7 million plants. You don’t notice any sprinkler heads, meaning the grass has developed deep roots thus requiring less watering. And the lawn clippings laying there will soon decompose into rich nutrients to nourish the lawn. You notice the grass does look greener on the other side—a result of you viewing the neighbor’s grass from the side versus straight down where you can see the soil between the plants.

A circle is clearly the best shape for a manhole cover.

We walk over a manhole cover, and I recall reading about a question Microsoft asks during interviews: “Why are manhole covers round?” The answers: A round object can’t fall through its own opening like a square can, it’s easier to roll out of the way, it can be repositioned any which way and always fit, a circle is the strongest shape in compression.

But it’s what we don’t see below that’s the true mystery and miracle. Before the advent of sanitary sewers, millions died of cholera, dysentery and plagues. Streets and rivers were filthy and stank to such a degree that during London’s “Great Stink” of 1858 the curtains in the House of Parliament were soaked in lime chloride to mask the smell. It’s the unheralded sewers below that afford us the luxury of good health, large cities and cleaner smelling air we enjoy on our walk today.

And so our walk ends. We’ve only scratched the surface of all there is to see. We’ve yet to examine the pigeons and wires overhead, the life-saving water below our feet and the hundreds of signs, lines and other items we pass by and know nothing about. We read books about scaling Mount Everest, journeying to the depths of the ocean and rocketing to the moon. But perhaps now is a good time to explore the world right at our feet. It’s a wondrous world indeed.