For nearly 30 years, New Richmond has hosted the International Cardboard Boat Regatta, a high-spirited race on the Ohio River 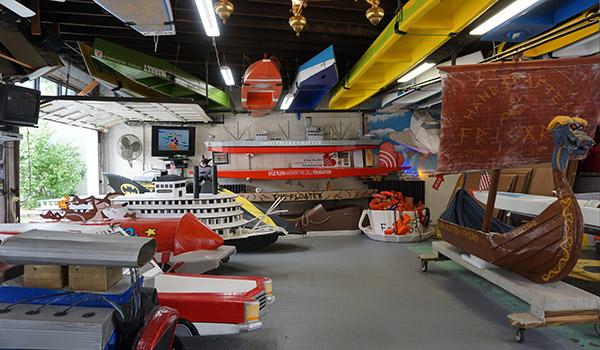 Next week, more than 70 colorful boats will set out from tiny New Richmond, Ohio, in the southwestern corner of the state, and race down the Ohio River. Some won’t finish the short 200-yard journey alongside the town's Front Street; they’ll sink before reaching the finish, and that's expected. It's not for lack of skill of the captain—instead, it’s because the boats in the race are all made from cardboard. Captained by all ages, the cardboard boats range from canoes and kayaks to elaborate vessels shaped like guitars, ambulances and battleships.

This is the scene every August in New Richmond, home to both this race, known as the International Cardboard Boat Regatta, and the world’s only Cardboard Boat Museum.

The race grew out of a burst of creativity from locals Shanna and Jim Morarity, who were perhaps inspired by a similar event hosted by Southern Illinois University Carbondale since 1974. “They had an idea to build boats on the beaches of the river,” Ray Perszyk, who started participating in the race the second year it ran, told Ohio Magazine in 2015. “They provided cardboard and tape and said, have at it.”

In 1993, for the inaugural race in New Richmond, it was as simple as throwing a piece of industrial cardboard into the river, hopping on and seeing how far they’d float before it sank. The first few years, only about five locals participated, building boats right on the beach before the race. Around 2000, the regatta became part of New Richmond's annual River Days festival, drawing locals, tourists and sometimes race participants from around the world; Clarence Sharp, a volunteer at the museum, recalls a team of engineers from Germany entering a boat in one race. Now that the race has been held every year and publicized, the quality of the boats has drastically improved. One of the most impressive to date is a Model-T car called the Shiner 5, complete with electrical wiring for lights, a windshield and a seat inside the car for the captain.

In 2001, brothers Ed and Tom Lemon and their friends Kenny Smith and Tim Young, all residents of New Richmond, watched the regatta and thought it would be fun to participate. They immediately formed a team and began building and racing. Thanks to Team Lemon, as they named themselves, New Richmond has become nationally known for cardboard boats—the four founded the museum in 2007.

When Team Lemon began racing, they adhered to still-standing rules the Moraritys put in place on what can be used to build a boat. Only three materials are allowed: cardboard, tape and latex house paint. You can use ancillary materials, like decorations or equipment that helps the boat work (such as pedalboat paddles) as part of the build, but the only material allowed to construct the boat's hull is cardboard. No other floatation devices can be used.

Construction can be as simple or complex as the builder makes it. On the easier end, participants build a basic boat shape with industrial cardboard, seal the joints with tape and cover the entire thing in latex paint to make it waterproof. The more complicated boats are unique shapes (think: antique cars and giant tractors) and employ mechanics and lighting. Sometimes the watercraft even play music, like a Batmobile-shaped boat on display in the museum.

“The Batmobile plays music from the old TV show,” says Sharp. “It [was fun] for a little while," but it could get tiring listening to the music all the time.

When Team Lemon builds basic boats, they use four cardboard layers on the sides, three on the bottom, and one or two on the top to make it look nice. They also use a special tape—one that’s paper-based—and slather on as many coats of paint as possible.

“Duct tape heats up and comes loose from the cardboard,” says Sharp, who also helps build boats at the museum. “We use a paper-backed tape, like a box tape. The paper backing helps the paint absorb into it, and when the glue heats up, it doesn’t come loose. And the more paint you put on it, the better they hold up.”

Now, 28 years into this quirky tradition, the regatta draws thousands of spectators. Twenty-seven paddle trophies are handed out at the end of the race, in categories such as highest speed, most durable boat, best team costumes and best paddlewheel boat. The crowd favorite is the Titanic Award, which goes to the most spectacular sinking in the race. One of Sharp’s all-time favorite winners of this award was a boat shaped like a toilet.

“They came in with this big toilet on a trailer,” he says. “It was in two pieces. They hauled the bowl down to the beach, then they put the tank on top of the bowl. It held six people. They got out in the river, and it looked really, really good. But then the race took off, the wind picked up, and it hit that toilet seat like a sail and started pushing them up river. Six people, trying to paddle that toilet down the river, and the wind was just blowing it backwards.”

The Titanic Award is becoming increasingly difficult to dole out. Over the years, participants have gotten more and more savvy with their boat building. According to Sharp, about 75 percent of the boats sank in the early days of the regatta. Now, about 95 percent make it to the end of the race fully intact.

Cardboard boat races have popped up around the country, with events in Washington, Pennsylvania and Massachussetts, but there’s only one museum for the boats.

The Cardboard Boat Museum opened 14 years ago in an old flooded-out gas station in New Richmond. At first, the space served as a workshop where Team Lemon built their boats, but according to Sharp, the museum was born when Team Lemon rescued a fellow regatta participant's boat headed for the trash. Too artistic to destroy, Team Lemon displayed it on the wall. The museum opened with 10 boats, and its collection has grown to more than 30 cardboard boat creations, all covering the walls, ceiling and floor of the building.

Every boat on display in the museum has raced and survived. Some have even been in dozens of races, reaching more than 60 miles of distance on the water. Team Lemon once “won” the Guinness World Record for the longest distance a cardboard boat has traveled on water: 22 miles. But, Tom Lemon says, it was never officially recorded, due to a snafu at the starting point that ended up reducing the total amount of miles.

Some of the boats in the museum's collection are standard canoe-shaped boats, but others are much more impressive. There’s a giant shoe and a huge teacup, a Viking longboat, and a custom-designed paddleboat replica of the Island Queen, a sidewheel excursion steamboat used in cruises on the Mississippi and Ohio Rivers between 1896 and 1947. A replica of a World War II supply ship built by Team Lemon is also on view. When taking on replica ships, Team Lemon uses a storyboarding process, studying photos of the vessel they want to recreate and attemping to match every aspect of it. “We’ve had a couple of World War II vets come in and say, ‘You guys did a really good job,’” Sharp says, “and it makes us feel good to know that.” Some of the boats that were destroyed in one of the regattas have parts on display, too, like the front of an airplane-shaped boat that emerges from the wall.

Depending on the complexity, it can take up to 500 hours to make a cardboard boat. In Sharp's experience, the paddleboats take the longest because of all the intricate details and moving parts; figuring out how to get the paddle apparatus and a person into the vessel is tricky business. A simple boat costs between $30 and $50 to make, with the price going up from there depending on the boat style and shape. The weight fluctuates, too. A bumblebee-shaped boat hanging from the museum’s ceiling is so light that Sharp can lift it with one hand. But others can weigh upwards of 100 pounds. “Every boat has its own little story to it,” says Sharp.

Today, visitors to the volunteer-run museum find more than just a sail through cardboard boat racing’s past. They also have the opportunity to take classes on how to build their own boat, grab a bite to eat on the property’s long riverfront patio, and take home all the materials necessary to begin their own creation. Admission to the museum is free, but donations keep the facility and race afloat.

The Cardboard Boat Museum is currently open from 4 p.m. to 7 p.m. on Thursdays and 10 a.m. to 4 p.m. on Saturdays and Sundays. This year's International Cardboard Boat Regatta will be on August 7 at 1 p.m.