The recipes for these and other intensely sweet, almond flour-based Sicilian confections like cassata cakes, lemon-flavored cuscinetti, buccellati twists and egg white-inflated sospiri (which means sighs) aren’t that complicated.

But the fabrication takes a master schooled in a culinary tradition born in the island’s convents, passed down in the hands of nuns who raise it to high art, not unlike the plaster saints and putti that decorate Sicilian Baroque churches.

Such a one is Maria Grammatico, owner of Pasticceria del Convento in the medieval town of Erice, poised atop fabled Mount Eryx, overlooking the island’s rugged west coast 2,400 feet below. 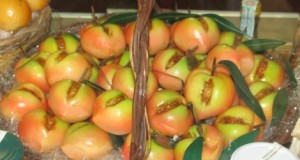 For over 50 years Grammatico has been giving Erice Paschal lambs for the Good Friday I Misteri procession, when scenes from the Crucifixion are carried around town, ossa dei morti (bones of the dead) biscuits for All Souls’ Day and mini di Virgini spongecake and ricotta custard mounds topped with a cherry so that they look for all the world like bosoms, thus commemorating the February feast day of St. Agatha, martyred in the third century A.D. after having her breasts cut off by Romans.

In Sicily, it seems, there’s always something dark behind even the most colorful traditions.

Grammatico’s own story is a case in point. Forced to enter a Catholic orphanage at age 11, she was taught by nuns how to make pastry, which was sold to townspeople through a revolving portal in the convent door. The rest of her childhood was spent reading her missal and walking behind coffins in a long row of little girls clad in black veils and dresses. When she left the convent in 1962 she took little more than her pastry-making skills with her.

But eventually her pasticceria became a landmark in Erice thanks in part to Bitter Almonds: Recollections and Recipes from a Sicilian Girlhood, by Sicilian-American writer Mary Taylor Simeti, also the author of the exquisite On Persephone’s Island: A Sicilian Journal.