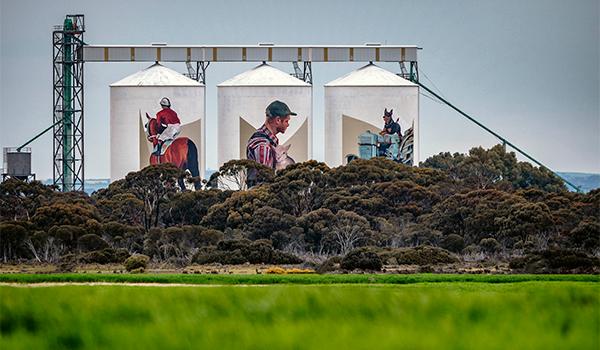 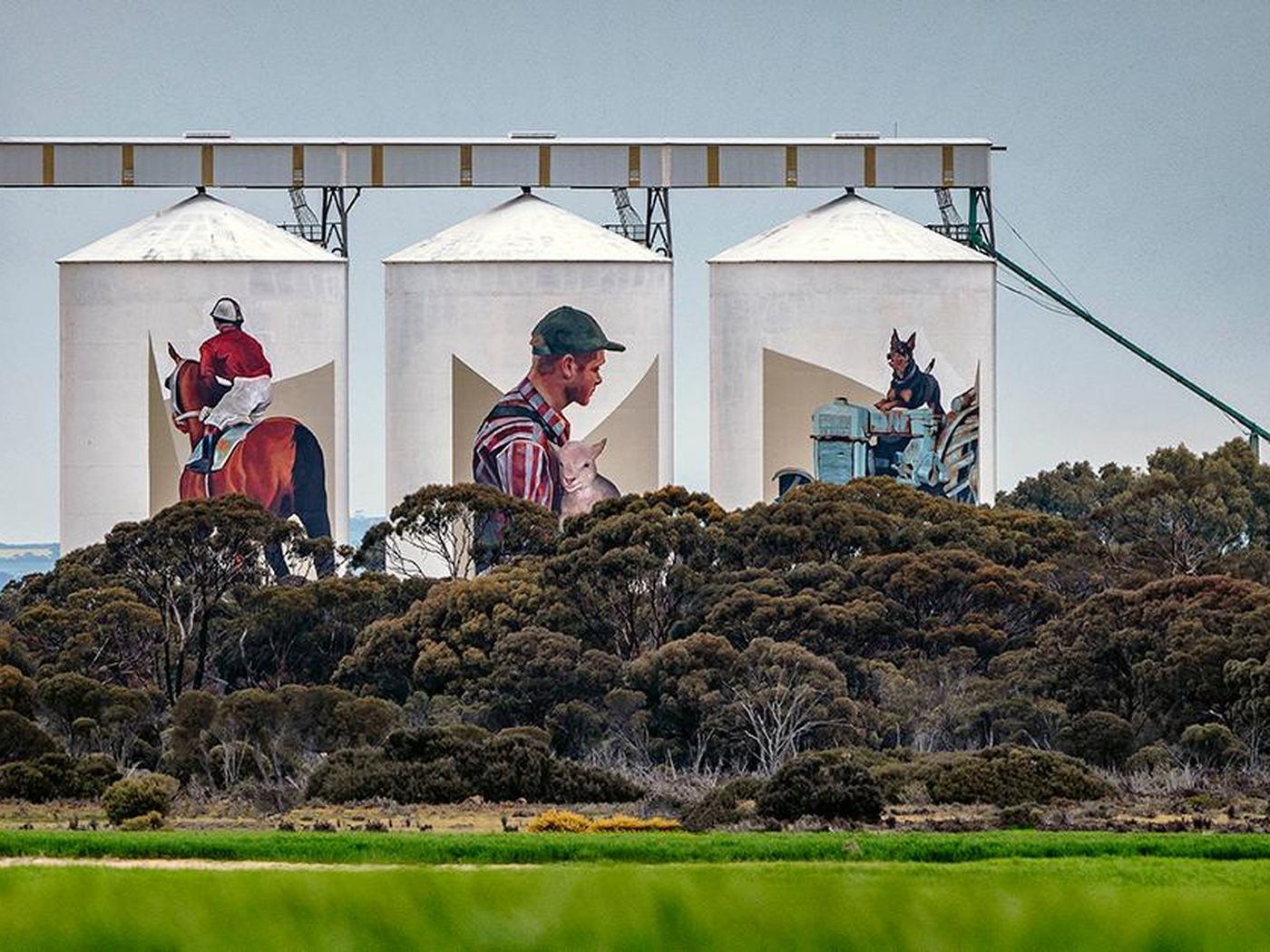 Editor’s Note: While COVID-19 has us stuck at home, we hope our stories can provide some much-needed armchair travel. Stay healthy, and keep these trip ideas in mind for the future!

It’s a hot day in Pingrup as the red sand of Western Australia dances across the pavement. A welcome sign reading “Small Town - Lots of Spirit” greets visitors as they enter the rural lakeside town, population 264. But until 2018, not many tourists made the four-hour drive from Perth. There wasn’t any reason to venture to Pingrup. Then three silos near the center of this tiny town were transformed into giant works of art.

In remote communities across Australia, water and grain silos have become the canvas for paintings inspired by their local communities, culture and way of life. Completed in September 2018, the PUBLIC Silo Trail—more than 620 miles of road linking Northam, Merredin, Katanning, Pingrup, Newdegate, Ravensthorpe and Albany—combines six different silo sites and one town (Katanning) filled with street art. A perfect road trip for art enthusiasts looking for something literally off the beaten track, the seven-town route offers visitors a different side of Australia.

American artist HENSE and British muralist Phlegm created the country’s first-ever silo mural in Northam, Western Australia, in March 2015, when FORM, a creative non-profit organization based in Perth, and CBH Group, the state’s main grain handler, commissioned them to paint eight silos. HENSE’s four depicted colorful shapes and patterns, while Phelgm’s portrayed whimsical, black and white flying machines. Perth-based artist Brenton See painted four silos in Newdegate showcasing the area’s wildlife: the western bearded dragon, the red-tailed phascogale (a rare marsupial) and a malleefowl bird. Also in 2018, New York-based The Yok & Shero painted a ruby seadragon, a rare marine creature found in the waters of Western Australia, across four huge silos in Albany. In the fall of that year, Miami-based artist EVOCA1 painted the three silos in Pingrup. In an effort to capture the essence of this farming town, the silos showcase a jockey on a horse, a man holding a lamb and a dog on top of a tractor. By September, FORM, inspired by the number of silo artworks across the region, established the PUBLIC Silo Trail. Since then, one-off silo art projects have blossomed across other states of Australia—Victoria, South Australia, Queensland and New South Wales—with the current count at 35 painted silos and 69 smaller painted water towers.

Annette and Eric Green are silo art enthusiasts and the creators of AustralianSiloArtTrail.com. In March 2018, during an epic road trip, they discovered a wildflower-inspired silo in Ravensthorpe, Western Australia. “When I stood in the shadow of my first painted silo, I was blown away by the sheer magnificence of it,” says Annette Green. “They are so huge, you marvel at how they were completed in the first place and how they painted them around a curve and at such great heights.”

After that, the Greens wanted to see as many silo murals as possible but couldn’t find a lot of information online. The couple created a Facebook page to document the artwork, and in September 2018, they released the Australian Silo Art Google Map, which clearly marks all silos, water towers and even street art. It gives detailed descriptions of each piece, including parking information. Today, the map has more than 526,000 views.

“For me, also it was the awakening that there was much more to this than the great works of art. It was also about the people of these struggling communities and the towns that they lived in,” says Green.

Silo art isn’t just a beautiful addition to the local landscape; it's a lifeline. Small farming communities around Australia continue to face some of the worst droughts in recent history, forcing them to abandon their farms. So, towns throughout Australia have decided to invest in silo art as a tourism opportunity.

“Have you ever heard of the town of Goorambat in northeast Victoria? Neither had I. But now thousands of Australia's and international travelers have. Not only are they [Goorambat residents] seeing the benefits of their hard work in the way of tourism dollars, but there is also new community pride as the story of the town is also depicted on the silos,” says Green.

Jimmy Dvate, a Melbourne-based artist and graphic designer, has painted numerous silos around the outback of regional Australia, some depicting the massive Clydesdale horses harnessed for farming in Goorambat, Victoria.

“Having the human element of a harness really added an extra level of complexity, also trying to capture the movement and dust around the feet was really satisfying,” says Dvate of the artwork. “The town is also like a second home to us. The hospitality is ridiculous, and it's been so awesome to see the social and economic difference the silo art has made.”

While Australia’s borders are shut for an indefinite period of time due to COVID-19, these towns will need support once the country reopens. “Now, more than ever, it's so important to support our regional communities, and silo projects give people another reason to explore outside the city,” says Dvate.

Much of the art depicts native Australia flora and fauna as well as portraits of the locals. “Where possible, I choose a plant, bird or animal that is either endangered or threatened, helping to educate and raise awareness,” says Dvate. This includes Milli, a barking owl from a sanctuary in Badger Creek, Victoria, painted on one of the silos in Goorambat. Just over 75 miles west in Rochester, Victoria, Dvate painted an azure kingfisher and a wrist-wringed squirrel glider once thought to be extinct.

South Australia’s Wirrabara silo art, painted by the Glasgow, Scotland-based artist Smug, is an exceptional showing of native birds and the importance of the area’s foresting industry. The five silos show an arborist holding an ax and a red-capped robin perched on a branch against a beautiful forest backdrop. In Sheep Hills, Victoria, there are six silos painted with the faces of living Aboriginal elders and children against a vibrant night sky, a common subject for Melbourne artist Adnate.

According to Green, there are at least 50 towns seeking government grants to get proposed silo art projects off the ground.

“I would love to see the Australian Silo Art Trail get the recognition that it deserves,” says Green. “It truly is Australia's ultimate road trip.”