It all started when he was tapped to run the Fogg Art Museum in 1909 (it was a decision the Boston Museum Bulletin later opined reflected a "remarkable prescience on somebody's part” seeing as Forbes was still in his 20s at the time).

The young art historian set out to transform the minor museum into what is now the jewel of the Harvard Art Museums. But as he began acquiring works for the museum’s fledgling permanent collection, he realized he needed a way to avoid being swindled by the many forgeries or composite works European buyers were looking to sell Americans.

And so, as the story goes, he looked to pigments.

From a stopper of dragon’s blood (dried garnet-colored drops bled from wounded fissures in bark) to Tyrian purple (which requires some 10,000 mollusks to produce a gram of the stuff), pigments are particles of colored material used to make paint, among other things, and, importantly for Forbes, their unique compositions and histories can be used to authentic artwork.

Now, a new book by Atelier Éditions, An Atlas of Rare & Familiar Colour, is shedding light on the storied history of his legacy, the Forbes Pigment Collection. Today, while the more than 2,500 samples are carefully stored behind glass in the Fogg's laboratory, visitors can see the colorful bottles arranged in rainbow formation in curio cabinets on the museum's fourth floor.

The book, fittingly organized in sections by color, highlights stories of various pigments in the collection.

Each vial has its own history.

Carmine, a bright-red color, is created by crushing Armenian and Polish cochineal insects, species that are now endangered. The unofficial red of the Dutch Golden Age, the book writes that it was “rendered wholly obsolete” by the Industrial Revolution’s explosion of synthetic pigments.

Conversely, Scheele’s Green, or Schloss Green, functions as an example of the perils of such leaps in technology. The synthetic copper-arsenic pigment, invented in 1775 by the chemist Carl Wilhelm Scheele, papered the interiors of the most stylish 19th-century Victorian home while slowly poisoning its inhabitants. Napoleon Bonaparte may have been among its victims. The yellowish-green wallpaper, which released arsenic into the air when it became damp, adorned the walls of his residence in exile on St. Helena.

The right pigment can transform a work. Johannes Vermeer is believed to have employed no more than 15 different pigments throughout his career. The book calls one of these pigments, ultramarine, “more beautiful, and more expensive than gold itself.” Notably, it gives life to the blue turban featured in “Girl with a Pearl Earring.” The work, which is currently being studied by experts at the Netherland's Mauritshuis art museum, relies on the color story of Vermeer’s palette to create the enigmatic visage of the young girl, and, as the book writes, its "unadulterated ultramarine renders her cascading turban near luminescent.”

During Forbes' tenure at the Fogg, the Forbes Pigment Collection grew to more than 2,000 samples, morphing into a work of art all its own. It also become an important educational tool; chemist Rutherford John Gettens, along with then-graduate student George Stout, used it as a resource to teach young art historians how to research and authenticate art, and in the process helped transform the field of art conservation in the United States.

Soon after Forbes retired as director of the museum in 1944, however, funding cuts led to the neglect of the collection, which was only updated in piecemeal fashion until the aughts. Then, the Fogg’s department of research and restoration (which had become the Straus Center for Conservation and Technical Studies), was tasked with analyzing three of 32 paintings purported to be by Jackson Pollock. Researchers were able to contest the authenticity of the works by proving pigments used in the paintings, like the lightfast pyrrole red, PR 254, had not even been discovered until after Pollock’s death in 1956.

With the project came renewed interest in Forbes’ pigment collection, and after the project wrapped in 2007, curators were given a new budget to replenish the collection and expand it.

The updated Forbes collection now tells stories of colors as old as charcoal, used in cave art, and as new as the controversial velvet-like Vantablack. Exclusive artistic rights to the world’s “blackest black,” which Surrey Nanosystems created in 2006, have been given to British artist Anish Kapoor's studio. Fittingly, the collection has also acquired artist Stuart Semple’s response to the color. Semple’s pigment, which he tongue-in-cheekedly refers to as the world’s “pinkest pink,” conversely, can be purchased by any artist except Kapoor.

The Fogg museum itself recently underwent its own $350 million overhaul, reopening to the public in 2014. With the renovations came a new space for the Straus center in the museum, which included large glass windows to showcase the Forbes pigment collection, giving curious visitors a floor-to-ceiling vantage point to peer anew at the pigments responsible for coloring history. 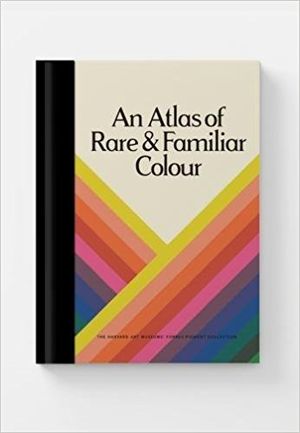 An Atlas of Rare & Familiar Colour