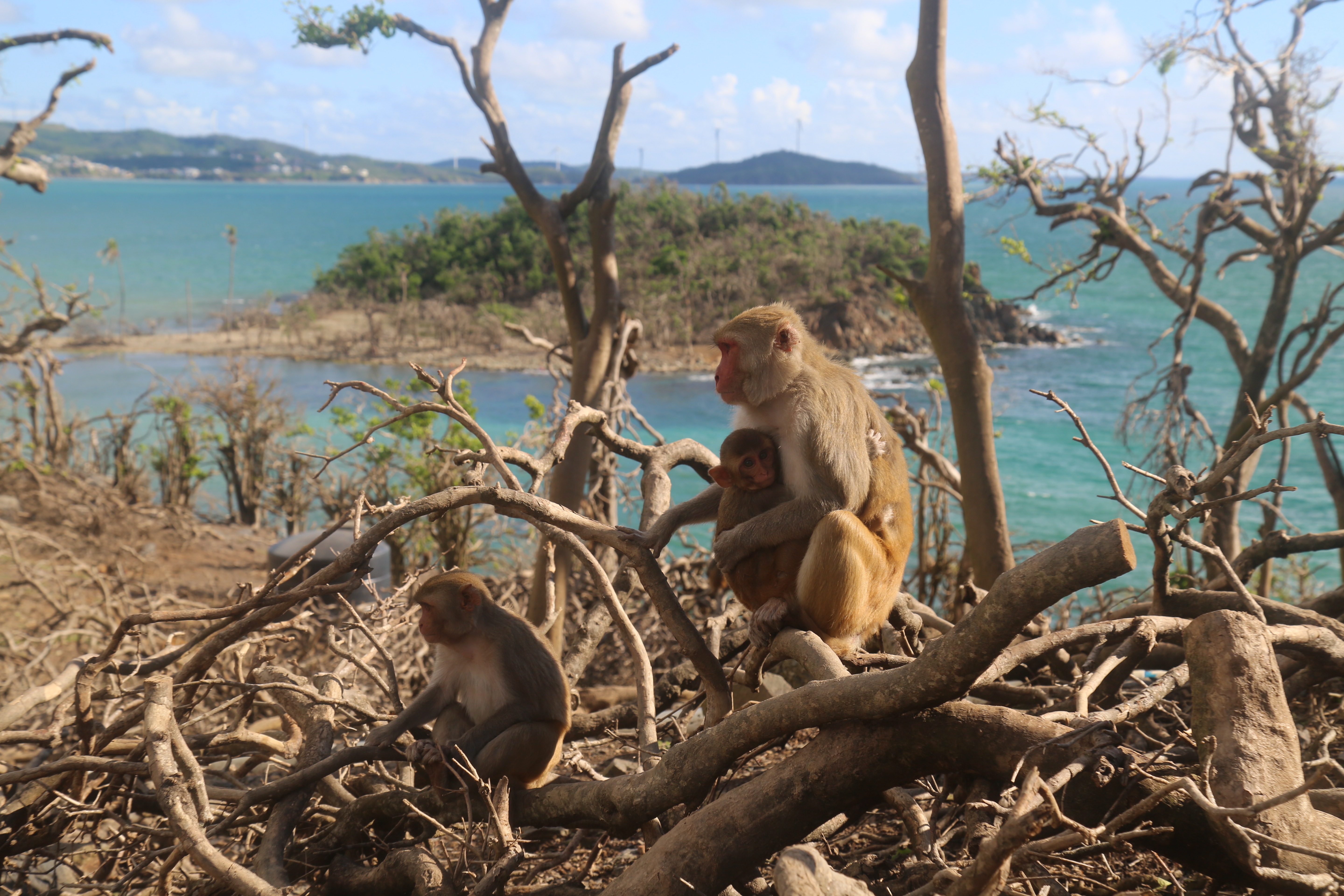 Some 1,500 rhesus macaques live a mile off the eastern shore of Puerto Rico on Cayo Santiago. Caribbean Primate Research Center

On the morning of September 20, 2017, Hurricane Maria made landfall in Puerto Rico, pummeling the island with 170 mile per hour wind gusts and flooding rain. It would be the first category 4 hurricane to strike the island in nearly 85 years, leaving many citizens without basic necessities like electricity, food, running water and shelter. However, in the storm’s aftermath, one community of residents emerged largely unscathed: some 1,500 rhesus macaques living a mile off the eastern shore of Puerto Rico on Cayo Santiago.

The island, known locally as Monkey Island, first became home to these unlikely inhabitants in the late 1930s, when primatologist Clarence Carpenter brought about 450 of the monkeys by ship from India to the 38-acre island to study their social and sexual behaviors. Through that initial pioneering research, the tree-studded enclave eventually became home to the Caribbean Primate Research Center, an educational and research facility that’s part of the University of Puerto Rico. Over the years, generations of monkeys have descended from that original colony, and today those descendants roam freely around the island, playing on its sandy beaches and exploring its endless canopy of trees. The rhesus macaques—each weighing about 20 pounds and known for their long, fluffy tails and straw-colored fur—live largely independent from human intervention (minus feedings).

After the hurricane ravaged Puerto Rico, researchers from the center feared the worst for the monkeys, unsure if they would even survive the storm. (Initial news reports were saying that the human death toll was hovering at 65 casualties.) However, once it was safe to return to the island, the scientists were surprised to find that the furry inhabitants had persevered.

“Two days after the storm, members of our staff took a boat to the island to feed them,” says Alyssa Arre, the center’s scientific director. “Everyone worried that the monkeys had died, but that wasn’t the case.”

Arre says it’s impossible to say for sure if any of the monkeys succumbed to the storm, however the workers tasked with taking daily census counts of the population didn’t find any irregularities.

While no cameras exist on the island to capture exactly how the macaques faired during the storm, Arre suspects that they sought shelter by climbing onto one of the island’s two hills and staying low to the ground. The only buildings on the island are used by staff for storage and research purposes.

“The hurricane destroyed all of the vegetation that the monkeys use to supplement their diets,” Arre says. “The wind was so strong [it knocked off twigs and branches], so we don’t think that they climbed into trees.”

The only daily human intervention that the monkeys receive are feedings, which came about as the result of the monkeys destroying much of the vegetation early on in their arrival to the island.

“Originally, [Carpenter and his team] thought the monkeys would just live on the island without any human intervention, but the monkeys quickly destroyed all of the vegetation on the island and ate everything,” Arre says. “So, they realized they would have to start sustaining the population with food provisions, and it’s been that way since the beginning.”

Currently, their diet includes coconuts, corn, seeds, apples, papaya and Purina Monkey Chow (yes, it’s a real thing!), which are yellow egg-shaped dry biscuits. Arre confirms that the monkeys are not fans of bananas despite what movies and media may depict.

“They like to take the monkey chow and put it in a puddle and roll it around [so it softens] before they eat it,” she says.

As a research institution that has been studying these mammals for decades, it only made sense to take a closer look into how trauma, in this case a natural disaster, affected their behavior and relationships. Researchers were surprised by their findings.

“After Hurricane Maria, the monkeys had more affiliative interactions in their social networks, and their social networks expanded, so they were interacting with more individuals” Arre says. “Researchers also studied how trauma, especially early-life adversity like a hurricane, can affect a monkey’s behavior and health.”

That research would eventually become part of a study published early last year in Current Biology, concluding that the macaques “became more social” and monkeys that were more isolated prior to the hurricane “increased social connections most after it.”

Another study found that females were reproducing less frequently after the hurricane.

Since its official establishment in 1970, the center has built a reputation as a pioneer in the field of primate research and has made many important contributions to our understanding of both primate and human behavior. The late William Windle, who oversaw the perinatal physiology lab at the National Institute of Neurological Diseases and Blindness (NINDB) in San Juan, worked closely with the island as it provided resources for behavioral and reproductive studies under naturalistic conditions. Windle studied the effects that asphyxia (oxygen deprivation) can have on a monkey’s brain during birth, and the permanent damage of the brain those effects can engender. His work not only changed delivery procedures in human infants, but he also went on to be awarded the Lasker Prize in 1968 for his work. More recently, researchers who have worked at the institute have been shedding light onto Covid-19 and its effects on monkeys.

A 1939 article published in Life magazine and photographed by German photojournalist Hansel Mieth also put Monkey Island on the map. One of Mieth’s images, known for being one of the most iconic animal photos in history, features a rhesus macaque sitting in the water soaking wet.

In a later interview, Mieth explained how she captured it, saying, “One afternoon all the doctors were away and a little kid came running to me and said, ‘A monkey’s in the water’… I don’t think [the monkey] liked me, but he sat on that coral reef, and I took about a dozen shots.”

Today, the island isn’t open to the general public, in order to prevent unnecessary human contact with the monkeys. Yet, each year, visiting researchers come to the island to study the monkeys and tap into the island’s expansive database that contains more than 60 years’ worth of data, from basic demographic information (age, social groupings and maternity rates) on more than 11,000 monkeys to genetic information and a collection of more than 3,300 monkey skeletons. Their studies continue to push the needle forward in our understanding of primate behavior and how it translates to our own behavior as humans.

"Rhesus macaques make a good model for humans, as we share many characteristics of our biology and similarly live highly social lives," Arre says. "Taken together, the projects with the rhesus macaques conducted at Caya Santiago help us better understand human sociality and health, and recently, how adversity and trauma might affect the life of an individual."