A Photographic Tour of the World’s Most Colorful Places 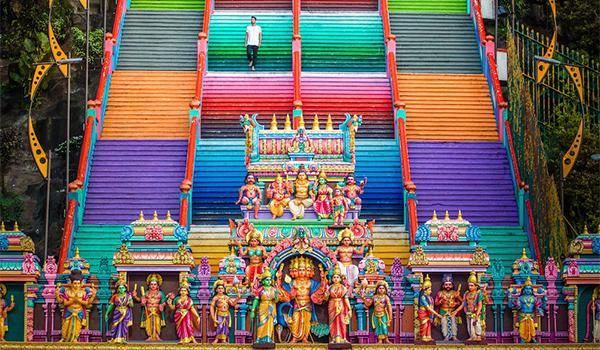 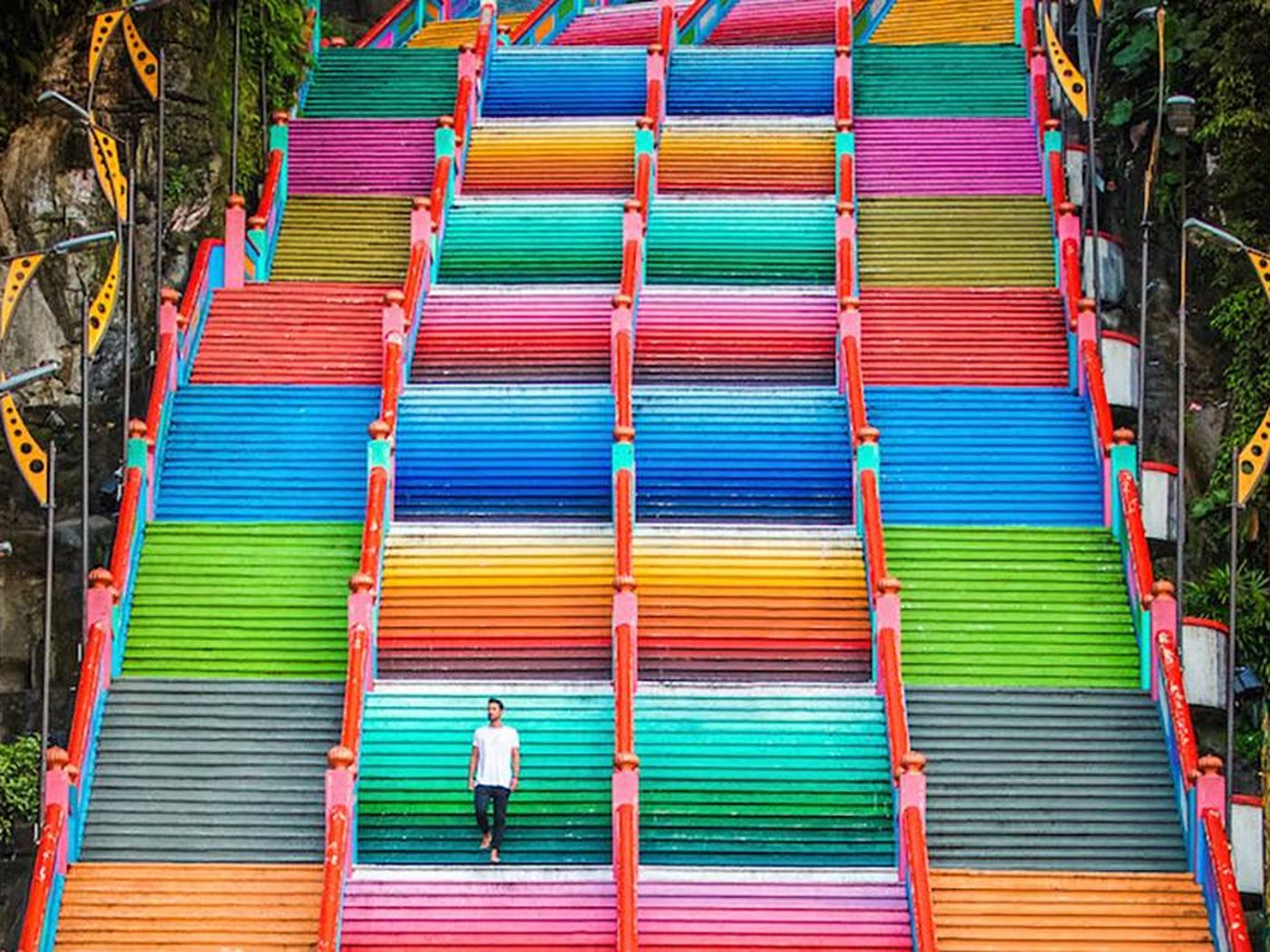 Editor’s Note: While COVID-19 has us stuck at home, we hope our stories can provide some much-needed armchair travel. Stay healthy, and keep these trip ideas in mind for the future!

For her upcoming book The Rainbow Atlas: A Guide to the World’s Most Colorful Places, author Taylor Fuller looked to Instagram for inspiration. Scrolling through her feed of brilliant photos shot by photographers and bloggers from around the world, as well as taking suggestions from other travelers like herself, she whittled down her list to 500 of the planet’s most eye-catching locales.

Divided by lines of longitude, the kaleidoscopic book showcases places from every color of the rainbow, from the scarlet-tinted ribbons of rivers cutting through Huelva, Spain, to the fragrant purple-hued lavender fields of Provence, France that perfume the region every summer.

“Whenever I think of something colorful, it puts a smile on my face,” Fuller says. “Color makes things more interesting. There are so many tall buildings around the world that all look the same, but when you add in some color, like at the Holi festival in India or a giant flower garden in Dubai, things are so much more interesting to look at. I try to find color in everything.”

Here are places of every color of the rainbow, plus pink!

Laguna Colorada stands in stark contrast when compared to the other lakes dotting Eduardo Avaroa Andean Fauna National Reserve in southern Bolivia. Due to a high abundance of red algae in its brackish waters, the lake, which sits at an elevation of 14,000 feet, has taken on a reddish-orange tone. Further emphasizing the eye-catching color are the white borax deposits floating on top of the shallow lake’s surface, the telltale sign of evaporation. The lake is also home to the James’s Flamingo, a breed of flamingo so rare that in the 1950s ornithologists firmly believed that they had gone extinct.

The Fushimi Inari Taisha is a meandering orange tunnel of torii gates that winds its way for miles through the forest of Mount Inari. The gates lead to a shrine dedicated to Inari, the Shinto god of rice. According to legend, a miraculous event occurred there thousands of years ago when someone shot a rice cake in the air, causing it to morph into a swan, which then landed at the same spot where the shrine sits today. Soon thereafter rice was plentiful, and locals saw it as an omen. Today it’s a popular pilgrimage site for hikers. “[I recommend going] early in the morning and walking a mile through it,” Fuller says. “You come out all the gates and no one is around. You can walk for hours, it goes all the way up the mountain. You can spend the whole day there walking and exploring the trails.”

While visitors to Trinidad have long praised the town in central Cuba for its array of brightly painted buildings (not to mention cars), there is one building in particular that stands out from the rest. Convento de San Francisco de Asís serves as the town’s focal point thanks to its multi-story yellow tower. Visitors can climb to the top of the tower that overlook’s Trinidad’s network of cobblestone streets. “[Cuba] really is another world,” Fuller says. “It’s so untouched. When you walk around, everyone is out sitting on stoops or dancing in the streets. Everywhere you turn there’s a new color to see. Many of the buildings are old and dilapidated, but that’s part of the charm.”

Shrouded in a sea of green trees, the Tunnel of Love also happens to be the site of an active train track. The nearly two-mile tunnel had an important purpose during the Cold War as the tracks led to a nearby military base. To help camouflage top-secret activities and equipment from prying eyes, the military decided to build a tunnel using materials that were readily available, in this case birch and alder trees. Today the tunnel serves as the perfect backdrop for snapping a photo and was even the location of a Japanese movie released in 2014 called Klevani: Ai No Tunnel.

Stretching 13 miles in length, the Mendenhall Glacier is part of the Juneau Icefield, an icy region that covers 1,500 square miles and dates back to the last ice age. The glacier is also within striking distance of Juneau, Alaska’s state capital, making it easily accessible to visitors who are drawn to it thanks to its strikingly blue color. According to the U.S. Department of Agriculture, glacial ice gets its bluish hue as a result of the ice absorbing all colors of the visible light spectrum except for blue. Unfortunately, like many glaciers around the world, Mendenhall continues to shrink due to global warming. “The environment is being affected by the climate crisis, so the glacier may look like this now, “Fuller says, referencing the photo in her book, “but it could look different when you get there.”

Each summer the rolling hills of Provence, France, become awash in shades of purple, and during that time the region is filled with the fragrance of lavender as store shelves overflow with products made from the bounty, including soaps, tinctures and dried bouquets. To help celebrate the annual harvest, numerous lavender festivals take place each year in local villages and communes around the countryside, including ones in Sault and Digne-les-Bains.

Often called the “Pink Mosque,” Nasir al-Mulk is a palatial religious complex located in the Gawd-I Arabān quarter of Shiraz. Construction of the mosque began in 1876 and took more than a decade to complete, which is understandable considering the intricate ceramic tilework and kaleidoscopic stained-glass windows that fill the building’s interiors with a riot of color. It’s said that the building’s architects were inspired by the relationship between heaven and earth. The result is a “jewel-like” space that marries together color and light. 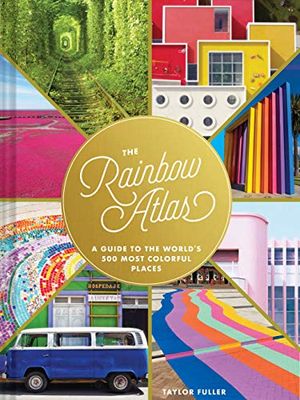 The Rainbow Atlas: A Guide to the World's 500 Most Colorful Places

Spanning natural phenomena, architectural wonders, art installations, and more, the contents of this book range from the pink salt lakes of Mexico's Yucatan Peninsula to the eye-catching home façades of Cobh, Ireland. Spectacularly colorful and packed with dreamy photographs, The Rainbow Atlas introduces readers to the most vibrant landmarks the world has to offer.