Passage Through the Zagros

True to an ancient way of life, a family in Iran makes a treacherous seasonal migration across the mountains 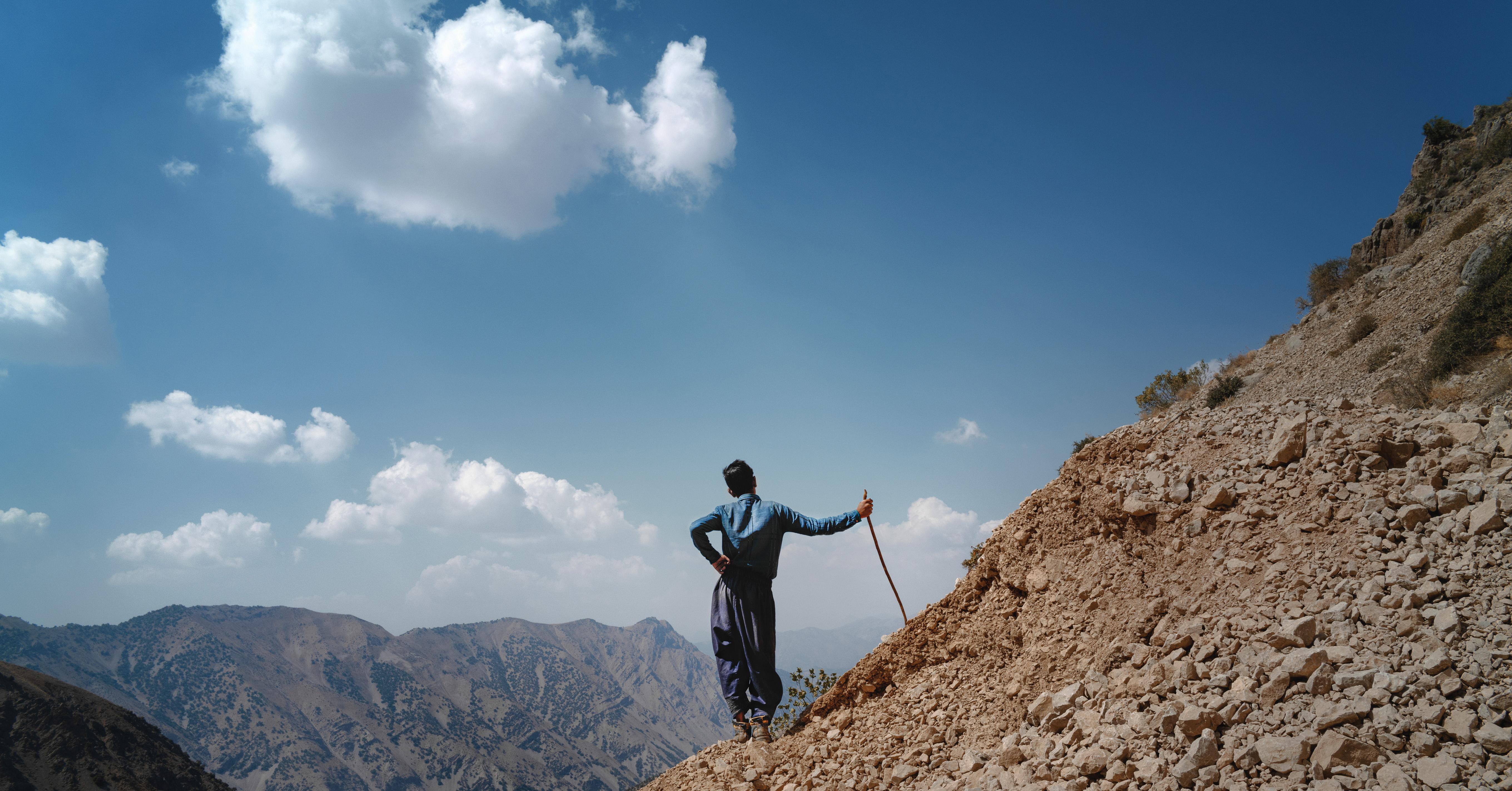 The Zagros mountains, in Western Iran, stretch for nearly 1,000 miles, from the sands of the Persian Gulf northwest along the modern border with Iraq and Turkey, separating the plains of Mesopotamia from the expanse of the Iranian plateau. Deep gorges and jagged peaks surpassing 14,000 feet buffered ancient empires from one another—Babylon in the Fertile Crescent and, to the east, the great metropolises of ancient Persia. They frustrated more than one invader, including Alexander the Great. But this forbidding mountain range is also rich in grasslands and rivers fed by winter snows, and for thousands of years tribal groups have migrated through the Zagros with the seasons to pasture their goats and sheep. That grueling, often dangerous feature of nomadic life has evolved, but it has not entirely disappeared. It persists to this day not only for practical reasons but also as a meaningful ritual for people whose history is rooted in the mountains.

Last October, the Mokhtari family, members of the Bakhtiari tribe, prepared to set out from their summer encampment in Iran’s Isfahan Province. They were parents Hossein and Jahan, three of their nine children and several cousins and other relatives. Following timeworn paths through the Zagros, allotted by custom to their tribe and clan, they would travel with around five horses, ten donkeys and mules, and hundreds of goats and sheep. Their destination in Khuzestan Province was some 150 difficult miles away. The journey, known in Farsi and in the local Luri dialect as kuch, would take two weeks. The British photographer Emily Garthwaite joined them to document the nomads’ trek.

The Mokhtaris carried everything they owned—saddles, pillows, blankets, pots of herbs and spices, tin pans, flour, ghee, milk and small metal bowls. There were spoons, ladles, bags of onions and potatoes, two containers of salt. They also carried two kettles, three changes of clothing each, shoes, and soap, a razor and a plastic mirror. “Hossein shaves every Friday during kuch, but only if there is time and access to water,” Garthwaite wrote in her journal. They also lugged large plastic water bottles, wrapped in hand-stitched coverings, four flashlights, extra batteries and prayer beads; like most people in Iran, the Bakhtiaris are Shia Muslims, though their religious practices are not always in line with the strict theology of the country’s ruling clerics.

The family woke early and were often walking by dawn. They covered roughly 10 or 12 miles a day, climbing thousands of feet in elevation only to descend and climb thousands of feet again as they made their way along Bakhtiari land toward their winter camp. Some days they went without fresh water. Others, they found no pasture for the animals, and the men had to take the flocks back into the mountains overnight to graze. They forded knee-deep rivers, carrying the less steady animals across on their shoulders. One day, a giant rock tore off a cliff face and tumbled down the side. The boulder narrowly missed 10-year-old Kianoush and his mule, but it crushed a sheep, and later a couple of the older men returned on horseback to butcher the animal.

(If reading this article through the Apple News app, click here to see the map.)

At night, the family laid down a sheet of plastic and several blankets and slept together under the stars, even as the temperature dropped into the low 40s. A young goat named Soor, an orphan reared as a pet, curled up near them. From her tent, Garthwaite could sometimes hear the livestock. “The bells hung around the necks of the sheep and goats ring through the night, and once in sync, they could be mistaken for the sound of rushing water.” Other nights they heard distant gunfire—a wedding celebration, a bear sighting, a warning to other traveling families that a thief was out prowling for animals to steal.

One morning, the group realized that a sheep had gone blind, and Abolfazl Mokhtari, a nephew, often carried it to keep it from falling behind the group. A few days later, they set out without counting the livestock, only to realize later that six sheep had been stolen by a thief in the night—a devastating blow.

Occasionally, the group passed through a Bakhtiari village, where they were greeted on ceremonial rugs laid beneath a giant oak tree and served tea with sugar. Because families walking kuch graze their livestock on land belonging to the villages they pass through, they frequently offer to exchange an animal with their hosts as a symbol of their gratitude, for example a young goat for another of the same age and size. In one village, the Mokhtaris’ hosts instead suggested trading a mature ram for Hossein’s white horse—a beloved companion to Kianoush, who stood clinging to the animal, wiping away tears, while his father negotiated the exchange.

In another, an older woman named Soraya said she preferred the mountains to the city despite the physical hardships. “Cities are easier, but this life makes me happy. Your body gets fit. You live longer here.” A 15-year-old named Marzieh had a different perspective. “I think young people like cities and old people like villages. I want to move to the city because I think life will be better there. You can sleep easy in a city because there is work. Some people love Bakhtiari life, but not me.” As roads, farms, industry and new towns carve up the mountains, there is little doubt younger generations are increasingly drawn to the opportunities of modern life. But Marzieh’s grandfather, Seyed, who was said to be more than 100 years old, was confident in the longevity of the nomadic life. “If there is good grass and good rain, we will be here forever.”

Meysam Emami, a Tehran-based guide who has worked with Bakhtiari people for nearly two decades, says he has seen attitudes change. Teenagers used to enjoy the months they spent up in the mountains, in the summer, “where they lived in their black tents and ran free.” Now, he says, many younger people seem to prefer their winter quarters, in cities, villages or encampments where families are building permanent lodgings. “‘We have roads, we have TV, we have schools,’ they say. ‘We can be chic!’”

On the 13th day of their trek the Mokhtari group reached a paved road. They had covered more than 125 miles, and were still two days from their winter camp. The road was clogged with Bakhtiari farmers driving across the mountains in trucks loaded with animals. Garthwaite said goodbye to the Mokhtaris and hitched a ride, but not before promising that she would return.

“Some people have this feeling that families who do this have superhuman abilities—that they’re designed for it, that they find it easier than we would,” Garthwaite said. “But they find it incredibly difficult. It’s challenging for everyone, mentally and physically. But the family also viewed this as a time to reconnect exactly with who they were.”

Many of Iran’s tribal minorities are now settled at least part of the year in villages or cities, and wealthier nomadic families send as much as possible to their encampment by hired truck or car, including their animals. Those who can afford it often prefer to make the drive themselves—on newer roads, it rarely takes longer than a day. But for many families, the migration itself remains a vital expression of their identity. “Most nomads and former nomads in Iran are deeply attached to their traditional territories,” says Lois Beck, an anthropologist at Washington University in St. Louis and an expert on Iran’s nomadic tribes. “Each of these groups has an intense sense of solidarity, and they are aware that they are a minority in Iran, and are often marginalized and repressed. And so they’re interested in keeping who they are and passing what they are to the next generation, and the seasonal migration is part of that. If you asked a Bakhtiari at random, what’s the most important thing about his culture? He would probably say: ‘Migration.’”

For Hossein and Jahan, the nomadic life was the only one they’d known, but they did not expect all of their children to choose it—already three were enrolled in schools in the city. Hossein hoped that some of his sons would find work in the city. When young Kianoush was asked whether he prefers a traditional lifestyle, he didn’t hesitate. “Yes,” he said, “because I can’t find a job in the city. I’m only 10.”

Photojournalist Emily Garthwaite is based in Iraqi Kurdistan and focuses on humanitarian and environmental stories.