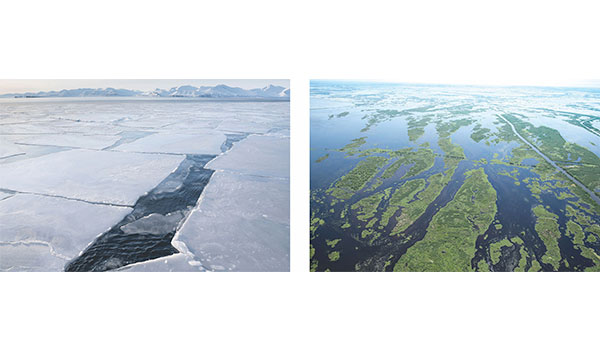 Understanding the regional impacts of a global problem like climate change can be challenging. Melting glaciers in Greenland or Antarctica cause sea level rise near coastal communities thousands of miles away. In places like New Orleans, for example, about 46 percent of sea level rise is due to ice melting around the globe.

Photographer Tina Freeman draws attention to the interconnectedness of two far-flung landscapes—her home state of Louisiana and the glaciers at our planet's poles—in her show "Lamentations," on view at the New Orleans Museum of Art through March 15, 2020. Over the course of seven years, she has captured both subjects, pairing photographs of Greenland’s permafrost, Iceland’s ice caves and Antarctica’s tabular ice sheets with visually similar images of Louisiana wetlands, the aftermath of Hurricane Katrina and other coastal landscapes. The show features a selection of diptychs from her book of the same name that features 26 stunning image pairings.

“'Lamentations' profoundly engages with both its message and its messenger, with both the precarious existence of glaciers and wetlands and with photography itself,” says Russell Lord, NOMA’s curator of photographs, in a press release. “The diptychs introduce a series of urgent narratives about loss, in which the meaning of each individual image is framed, provoked, and even haunted by the other.”

Smithsonian magazine spoke with Freeman about her experience producing this compelling body of work.

How did this project begin? Where did you start shooting, and where did it take you?

I was given an opportunity to travel with 84 other photographers who were chartering a ship to Antarctica to photograph ice. It wasn't about the animals—just the ice. I went on this trip, and I came back with some amazing photographs. We were there early in the season and the ice was gorgeous. That's when I started looking for reasons to go to other places to photograph ice.

Later I went to Iceland—I became completely besotted by Iceland. Then I was in Spitsbergen, a Norwegian archipelago in the Arctic Ocean. In Greenland, I've been to the east and the west coast—to the Scoresby Sound, the fjord system on Greenland’s East Coast. Then I went to the Jakobshavn glacier, which is at Ilulissat in Western Greenland.

When did it click for you to start pairing photos of ice with pictures of wetlands?

The pairing didn’t start right away. I’ve been surrounded by the wetlands all my life, but I hadn't really seen them as a photographer. When I was shooting the ice, I started seeing structural connections in these two different environments. After the first trip to Antarctica, I was invited to a New Year's Eve party at a duck camp on Avoca Island off the intercoastal waterway near Morgan City, Louisiana. The next morning on New Year's Day, we went out in a boat. It was an incredibly beautiful day—it was misting, and it was very gray. And that's when I started photographing the wetlands and when I started thinking about pairing these images.

The first pair was two horizontal images—one of the tabular icebergs in Antarctica and one of cypress trees in Louisiana. And then I started seeing more pairs that had some sort of similarity like a color—the pink and the orange of a sunset in Antarctica next to the orange booms from the Deepwater Horizon oil spill. There were some other ones that had strong structural similarities too.

I started sending my digital files to Costco and printing out packs of drugstore-size, 4-by-6-inch images. I printed out hundreds of photos and started matching them. I have a wall with magnetic paint, so I put them up on the wall with magnets as pairs. And then I'd move around the pairs again; there are some images that have three or more really strong possible pairs. I can't tell you how much time I spent pairing. But once you do a lot of that you begin to go "Oh!" You'll see something new, and you'll go "Oh, I do have an image that will go with that."

How did you capture the different locations featured in this project?

Some of the earliest photographs were taken in 2006. So, obviously, they weren't initially intended for this project. At the time, another photographer and I decided to take as many day trips as we could outside of New Orleans to see the damage from Katrina. We would go as far as we could in a day. One of the images from that was of the oil tanks and another one was the white tombs in the Leeville cemetery in Louisiana that are all strewn about and piled on top of each other after Hurricane Katrina. A lot of the wetland images are from Avoca Island. The areas, like Avoca, that are vulnerable to sea level rise are very flat and unless you have any altitude, meaning the aerial photographs, they're not very interesting—whereas in Antarctica, you may see mountains on the horizon. Capturing the clouds on the horizon is really important when you're shooting in the wetlands here to add dimension.

But that's when I started shooting aerial photography with South Wings aviation, which is a group of volunteer pilots that give their time to bring people like the press, politicians and photographers to see what's going on with the environment from above. When I was flying, I knew there were certain areas that I wanted to look for, many from my childhood, like the South Pass Lighthouse near Port Eads. I could see what had changed—the rivers narrowed because the wetlands vanished, so the river is full of silt.

Have you always found yourself moved by climate change or other ecological disasters, or nature generally? How did it feel to create these pairings?

More than a decade ago, I was on a national conservation committee, and I wrote reports about environmental topics, including toxins and air quality, endangered species, climate change, plants and national forests. So I was really, really aware. Also, around that time, the Larsen-B ice shelf in the Antarctic Peninsula broke off in 2002. There was plenty of pretty high-profile stuff happening, if one was paying attention. I can't even tell you when I first became aware of all of this. Maybe it was with Hurricane Camille in 1969. My parents and my grandparents owned a piece of property in Mississippi, and it was quite impacted by Camille’s storm surge. We lost the house, so I was very aware of what storms were doing. One of the barrier islands near there broke in half when I was 19 years old. So the power of the environment has been a part of my life for a long time.

Talk about the name ‘Lamentations.’

It was a really hard one to come up with the right name. One of my first picks was ‘Doomsday,’ which was too over the top. And then I went with ‘Lost’ for a while and that didn't really cut it. ‘Lamentations’ is the best I could come up with—it brings forth the poetry and beauty. For me, photography is about beauty. I'm not into ugly scenes, it's not my thing. I want to seduce people with the beauty of what they're seeing, and then hopefully they'll take a closer look and learn more about what's happening.

Rachael Lallensack is the assistant web editor for science and innovation at Smithsonian.