In 2008, a group of pronghorn passing a small town in Wyoming clambered through a hole in a fence alongside a busy highway, continuing an annual migration across the Greater Yellowstone Ecosystem. It is a trip the pronghorn must take to breed, eat and survive in these parts. And this time, National Geographic Photography Fellow Joe Riis captured the moment on camera. The scene no longer looks the same—there’s now an overpass for the pronghorn to cross the highway instead of squeaking through a broken fence. But as Riis told Smithsonian.com, the photo still exemplifies the plight of animals migrating across the region, and the need for the community to work together to ensure their safety.

It’s a message he’s trying to send with the release of his new book by nonprofit publisher Braided River, Yellowstone Migrations, a photographic and scientific fieldwork collaboration featuring his photos complemented by essays from leading scientists on the topic. Riis spent about a decade tracking, in photos, the migrations of elk, mule deer and pronghorn across the Yellowstone region. And he spent more than two of those years in the field with ecologist, UC Berkeley professor and National Geographic Fellow Arthur Middleton, who contributed the essay “Sustaining Migrations in the Modern West” to the book. 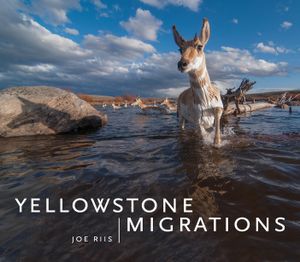 Through his book, Riis said, he wants to show the public that migrating animals need to move outside of the protected areas designated for their use, like national parks; those areas just aren’t enough space. "A lot of times [migrating] means moving through some human landscapes as well as wild landscapes... Inherently, it leads to the need for collaboration with people, because these animals are voiceless in our culture. If we don’t work together to conserve them, they’ll go away.”

The photo of the pronghorn crossing by the highway is a perfect example of that, illustrating the need for infrastructure shifts to preserve the migration routes. Routes which, prior to Middleton’s work, were largely unknown. The ecologist has worked with several other groups to create a comprehensive map, included in the book, tracking the migration routes and patterns of the elk throughout greater Yellowstone. “Working on these kinds of wildlife issues, there [are] a lot of people directly and indirectly involved,” Middleton told Smithsonian.com. “There’s a lot of politics, there’s a lot of complexity, there’s a lot of people feeling different things about different issues related to the wildlife, whether it be hunters, sportsmen, agencies, ranchers or [environmental] groups. One of the really important things was just being on the same page and respecting everybody involved.”

At the heart of this book is a message of partnership and collaboration among these groups. Both Riis and Middleton are quick to note that no single organization can preserve the migration routes on its own—so this book is, in part, an effort to raise awareness with as many groups and stakeholders as possible, including the general public.

“As a scientist, I’ve been very distressed by my field’s struggle to connect with people, so I’ve been really motivated to find ways to connect better to those people who are supporting us,” Middleton said. Riis agreed: "I'm trying to show in pictures the time when [these animals] are most vulnerable and most at risk [in order to] help people understand what these animals go through to survive.”

The pair's work is currently on display at the Yale Peabody Museum in an exhibit called “Invisible Boundaries” that runs through March.