January 1990: Salt, my recently adopted sled dog, is sitting beside me as we drive into the parking lot for Anchorage’s mushing trails. I can sense his excitement and wonder if it’s connected to my own roiling mix of elation and anxiety. When we pull up and Salt sees his former Iditarod teammates tethered to a truck parked alongside us, he starts howling. Then he paws the car door and bites the frosted window.

The two of us clamber out of the car, greeted by my new friend and Salt’s original owner, Jeannette Willis. “Why hello, Salt,” she says to her old buddy. “Aren’t you excited.” Then she smiles at me, “Hi, Debbie. Are you ready?”

I don’t know then that I’ll eventually become an accomplished dog-musher—that one day I’ll own dozens of huskies and race in two Iditarods. In 1990, I know nothing. I’ve never even been on a dogsled before.

I blurt out questions that kept me awake all night: “Is there a way to slow down?” “Does ‘gee’ mean right and ‘haw’ left?” “How should I talk to my dogs?”

Jeannette laughs. “Believe me, they know what they’re doing,” she says. “You’ll figure it out.” Then she points to my sled, with its lines stretched out, and to several huskies standing by her truck. “There’s your team, Debbie. Charlotte can lead with Salt. Velvet and Copper will run behind them. Go ahead—get them ready.”

At least I know how to harness a dog. Since adopting Salt, my gentle white husky has pulled me on skis—a sport called skijoring—over miles of trails in the nearby Chugach Mountains.

In short order I harness my four. When I position Salt at the lead, he stands still and holds the gangline tight, doing his job. Next I put Charlotte alongside him. She gently nuzzles my leg, but when I step away she leaps skyward. Not once, but again and again she manages to catapult four to five feet above ground. Her acrobatics prompt Salt to lunge and yowl. I hurry to connect Velvet and Copper behind them. They bark with glee while digging in the snow. All are frantic to run.

Meanwhile Jeannette clips her team in position. Shouting above the fray, she says, “I’ll go first.” Then she points to a slipknot securing my sled to a post. “After I take off, pull that knot—your dogs will follow mine. Just remember: Don’t let go.”

In a matter of seconds Jeannette and her team are gone.

For a moment I hesitate. The prospect of unleashing the canine energy ahead of me is both thrilling and daunting. Then Salt turns and gives me an irresistible look of expectation: It’s time. 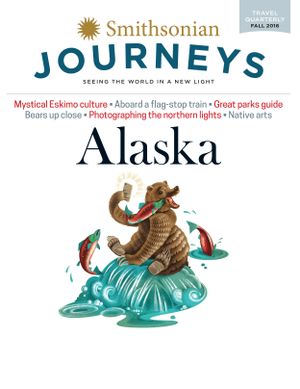 I yank the knot, and my dogs spring into an all-out gallop.

Clawing my handlebars, I manage to stay upright as my sled careens into a lopsided rut. Then I notice a sharp upcoming turn. It all happens in a blink: my attempt to step on the brake and the sled flipping over. Now I’m being dragged on my belly behind four charging sled dogs, the words “don’t let go” ringing in my ears.

“Whoa,” I cry, but my dogs run faster. Soft snow billows in my face and goes down my neck. I’m wondering how long I can hold on—when we finally stop. I look up to see Jeannette, standing on the runners of her sled, my four rascals wrapped around her legs.

“Better get upright,” she tells me. As soon as I do, she’s off, and so are we. This time my huskies lope close to her heels.

Slowly I find my balance. I practice bending my knees and loosening my grip on the handlebars. I relish the cool air in my face, and the profound quiet: only the jingle of collars and dogs panting, everything muffled by the snow. Together my dogs and I zip through an elegant stand of birch and alongside cattails in a frozen marsh. We pass willows laced with hoarfrost, and slip into the fragrant shadows of a dense spruce forest. As Charlotte and Salt, Copper and Velvet streak through the morning’s filtered light, they take me with them—the trail steeped in promise.

I’m absorbed in the romance of it all when the parking lot comes into view. With an unexpected jolt, my high-spirited dogs pass Jeannette. They barrel through the rough ruts; I tip over again. While I’m being dragged facedown behind them, my huskies return to the post where our escapade started.

The dogs are triumphant. I’m in the snow, laughing. Before I can compose myself, my team of four pounces on top of me. Their eyelashes are frosted, their faces animated with joy.

Jeannette walks over chuckling. Handing me a bag, she says, “Snack time.”

Sitting with my huskies, I dole out chunks of salmon. With pats and belly rubs—and a few fishy licks on my face—we celebrate the morning’s adventure. I don’t yet know that the course of my life has just changed, forever.

Stepping onto the runners of a dogsled won’t change everyone’s life as dramatically as it did mine, but you never know—and it’s easy to try it for a few hours or several days. Several reputable outfits now offer rides, with the option to drive your own team. Experienced instructors, some of them Iditarod veterans, will provide tips about harnessing dogs, giving commands, and navigating the trail.

My own learning process probably began long before my first outing on a sled. Ten years before that initial excursion, soon after moving to Alaska, I’d elbowed my way through a crowd to a snow fence at the starting line of the thousand-mile Iditarod Trail Sled Dog Race. I just wanted to see the dogs.

I’d always been a dog lover, having grown up with a Labrador at my side. But there was something about these huskies at the starting line—their animated passion for each other, for their human companion, and for the wilderness trail—that drew me in.

Quickly I learned that most sled dogs were mixed-breed Alaskan huskies. For centuries before European contact they had served as pack animals for people who lived, hunted, and traveled in the frozen north. Later, in the early 20th century, these loyal workers hauled mail and supplies to Alaska’s interior gold camps. In 1925, when diphtheria broke out and threatened to take the lives of countless children in Nome, mushers and their teams relayed the much needed serum.

Saturday, March 3, 2003: Sixteen huskies in crimson harnesses charge into the Iditarod starting chute. Four burly fellows grab my sled, to hold it in place for the two-minute countdown.

“Hey Debbie, We’ve got your rig. Go on up with your dogs.”

When I step off the runners, I notice throngs of school children crowded along the snow fence, their faces lit with expectation. My own grown children and husband are tending to our huskies on the line. The air is electric with hype; the thousand-mile trail beckons. For a moment I’m lightheaded with nerves—I need to get to my dogs.

I walk pair to pair, greeting each friend. “You be a good boy,” I tell Zeppy, my mischief-maker. Just interacting with the floppy-eared boy restores my spirit. Then I calm Lil’ Su, who’s trying to leap ahead, and pat Taiga in her favorite place, between her hips. When I reach my lead dogs, I sit down alongside them. Playful Juliet snatches my mittens; her humor eases my angst. Ever serious Kanga barks like a metronome. Her steady focus suggests we won’t miss a beat.

I reach out and gather my leaders into my arms—along with many memories. Since my dogsledding beginnings with Salt—over years and countless miles—I’ve learned to share the struggles and the joys of adventure with my dogs, taking inspiration from their resilient canine spirits. Now, face to face with my own Iditarod undertaking, one thing seems clear: It’s all about the dogs.

A hand grips my shoulder—interrupting my starting-line daydream. “Debbie. Go to your sled, now!” the Race Marshal says. Everyone motions for me to hurry. Apparently I’ve missed my own Iditarod countdown. I hustle back to my sled, and within seconds we are off.

The power of 16 dogs steals my breath. We rocket through deep cockeyed ruts and beyond, to the mesmerizing melody of jingling collars, runners gliding, and paw steps on snow. Soon my huskies settle into a sweet marathon pace that will sustain us—upright. We’re sharing a traveling cadence, one that we’ve all come to know by heart.

Where you can ride behind a dog team