When the Race Is Over 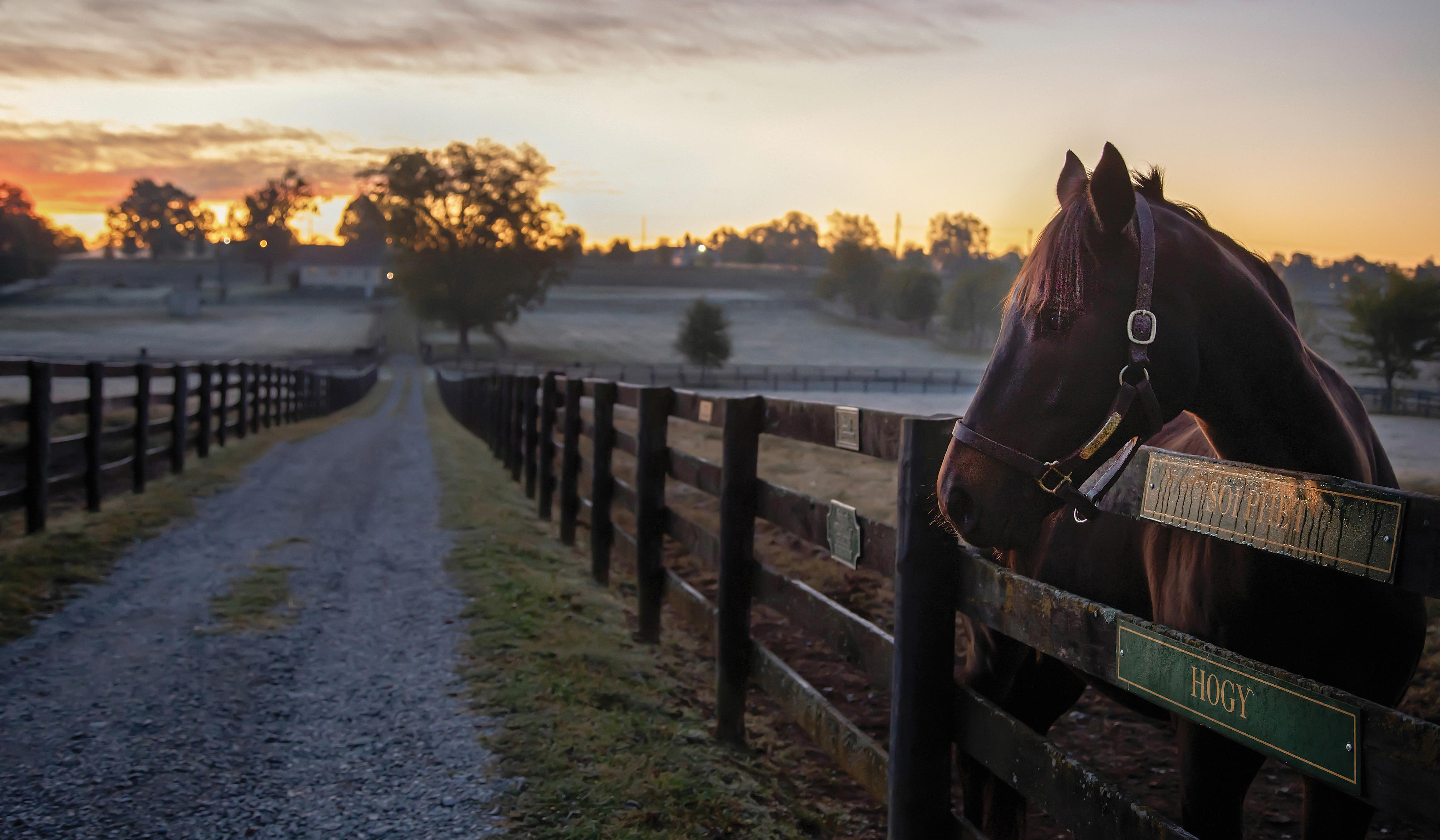 Silver Charm, a 1,200-pound Thoroughbred with a white coat peppered by tiny flecks of gray, leaned over the top railing of the pasture fence and nibbled at the lips of the man with the cap turned backwards. Michael Blowen, his eyes closed, accepted the proffered kiss, then turned to a visitor standing nearby.

“He requires your adoration,” Blowen said, as the big horse sniffed his ear. “If you want him to come over, you’ve got to shout, ‘Silver Charm, you’re the greatest!’ Even then, he takes his time.”

Silver Charm might not have been the greatest ever, but he certainly earned a right to his version of noblesse oblige. As a racehorse, he was good enough to win the 1997 Kentucky Derby and Preakness and earn a place in racing’s Hall of Fame, followed by a commercial stallion career in Kentucky and Japan before his retirement in 2014.

Unfortunately, such a shining résumé does not guarantee a happy ending in the world of Thoroughbred breeding. In 2005, a Thoroughbred industry magazine reported that Ferdinand, winner of the 1986 Kentucky Derby and 1987 American Horse of the Year, was sent to a slaughterhouse after a ten-year career as a stallion on Japan’s northern island of Hokkaido. The news prompted efforts in the United States to forestall any repeat of Ferdinand’s fate. Silver Charm, along with other stallions, subsequently were sold to foreign interests with a buy-back clause triggered when they reached the end of their commercial value.

That is how Silver Charm, at age 20, became one of almost 130 horses living in comfortable retirement at Old Friends Farm, 236 grassy, gently rolling acres only a few miles north of Interstate 64, in central Kentucky.

Blowen, 73, the founder and president of Old Friends Equine, is a retired Boston Globe film critic as well as a longtime fan of horse racing. He runs Old Friends with his wife, Diane White, a former Globe columnist. In their retirement, the couple have turned an impetuous 2003 act of horse adoption into an attraction that last year drew some 21,000 visitors. Their idea was not only to give a home to Thoroughbreds past their prime—a service other organizations provide—but also to create a living museum dedicated to the breed.

That first adopted horse, named Narrow Escape, was an old mare with no commercial future who failed to attract a single bid at auction. In short order, Blowen and White acquired 15 more, including pensioned mares, geldings and even stallions repatriated from Japan. By 2006, the fledgling Old Friends had outgrown its cluster of leased paddocks in Midway, Kentucky, prompting Blowen to cast his sights around for more land. Quite by chance, he came upon a property in Scott County, just northwest of Lexington, owned by a horse breeder named Clay Neel. The property was called Dream Chase Farm. “I was getting up in years, so it was time to sell,” said Neel, who still lives nearby, in Georgetown. “I was impressed with Michael from the minute I heard his idea. What he’s done with the farm and those horses is a miracle.”

Thoroughbred racing could use a few miracles. For all its romantic history and pageantry, the sport brims with anachronisms that are wearing thin in 21st-century America. Fewer and fewer people are attending the races, and even fewer have any tactile experience with horses. The roughly 20,000 Thoroughbreds foaled each year are monetized from the day they hit the ground until that moment they are no longer able to generate enough income, whether through breeding or racing, to justify their upkeep.

Furthermore, high-profile racing fatalities such as Eight Belles in the 2008 Kentucky Derby and Go for Wand in a 1990 Breeders’ Cup event sparked public outrage over the use of animals in a gambling enterprise. The sport managed to weather those storms and move on with business as usual, more or less.

Then came 2019. The season began with 22 equine racing and training fatalities in a three-month period at Santa Anita Park in California, one of the premier tracks in the country, inspiring activist groups such as People for the Ethical Treatment of Animals to descend upon the issue with vehemence. Politicians issued threats of possible government intervention in the racing industry. But the year ended as it began, with the fatal injury of a horse named Mongolian Groom at Santa Anita in November as he neared the finish of the Breeders’ Cup Classic, America’s richest race.

Major racing interests formed a consortium in late 2019 to confront issues of horse welfare, but there remains no central organizing body with the clout to take unified action in the 37 states where horse racing is legal.

Old Friends Equine, flaunting its romantic version of the Thoroughbred racehorse, is striving to distance the animals from the economic pressures that sometimes put them in harm’s way during their racing careers, while at the same time celebrating their athletic achievements. The message can be mixed: If they are the lucky ones, how many are not as fortunate? Blowen and his supporters are determined that luck should have nothing to do with it.

There is no typical retiree at Old Friends among the 128 current residents. Both the average and median ages clock in at about 16 years. The oldest is Dinard, 32, winner of the 1991 Santa Anita Derby, while the youngest is Brilliant Decision, 5, who competed only nine times before it became clear he was not meant to be a racehorse.

When a new horse is donated to Old Friends, Blowen and his staff take their time finding the best social fit. Stallions, who tend to compete for pasture dominance, are granted private enclosures. Most senior mares love company, and geldings (neutered males) are grouped in small, compatible herds.

“I defy anyone to come watch some of these old guys playing and racing with each other and think they’re not having a blast,” Blowen said.

The stallions and mares residing at Old Friends primarily have been donated by the farms where they reached the end of their procreative days or racing days. The geldings can arrive courtesy of their compassionate owners and trainers, although too often they end up on the Old Friends doorstep as refugees from financial hardship or neglect, one trailer ride away from a slaughterhouse in Canada or Mexico.

For human visitors, Old Friends is accommodating, but not fussy, and depending on the time of year they may get wet, cold, sunbaked, or even muddy. At the approach of a tour group, the pampered inmates might amble distractedly to the fence as if to sigh, “Here we go again.” Others stand at a distance, demanding that Blowen first produce a carrot or peppermint treat before coming closer.

Even the most jaded racing fans come away from Old Friends astounded by the lineup. Silver Charm is usually the first stop, akin to pausing at The Winged Victory before continuing through the Louvre. His acquisition by Old Friends was the result of an international effort between the farms in Kentucky and Japan where he served at stud, along with the family of the late Robert Lewis, who made his fortune selling Budweiser beer and raced Silver Charm to the pinnacle of the sport.

In addition to Silver Charm, the headline names include the unassuming Game On Dude, three-time winner of the Santa Anita Handicap, and Alphabet Soup, a ghostly white stallion who won the Breeders’ Cup Classic, as well as Touch Gold, the accomplished killjoy who deprived Silver Charm of Triple Crown glory in the 1997 Belmont Stakes.

“Silver Charm and Touch Gold are both 26, and they still run around like kids,” Blowen said. “Every once in a while, Silver Charm will look at Touch Gold like, ‘How about we go again?’ Think we could sell tickets to that?”

American sprint champion Amazombie shares a paddock with the blue-collar Rapid Redux, a winner of a record 22 consecutive races. Comma to the Top was a West Coast stalwart who raced for movie studio executives. And the dark brown fellow with the daub of white between his eyes is Little Mike, one of the premier grass runners of the past decade.

Archie’s Echo, a grizzled, 31-year-old chestnut with a wide stripe of white running from his forehead to his upper lip who raced 40 times and earned barely $30,000 before falling off the grid.

Cappuccino Kid, bred to be royalty but discarded after running 44 races and bound for a slaughterhouse when someone recognized him in a Washington State holding pen.

Racketeer, once a horse of considerable value, shunned when he no longer could earn his keep and on his way to a Mexican slaughterhouse before his rescue by activists in California.

They all ended up at Old Friends, on display with the other feisty survivors, guaranteed a good life to the end of the line. Given the advanced years of some of the animals (16 reached age 25 or older this year), the turnover is steady. There is also a place for their ashes in the farm’s memorial garden, which is named for Nikki Bacharach, the daughter of the composer Burt Bacharach and his former wife, the actress Angie Dickinson. Both are Old Friends benefactors.

“I think of Burt’s music, and how it lasts forever, just like these horses have earned the right to be remembered,” Blowen said. “I know we have to say goodbye to them eventually. And believe me, I’ve gone through several stages to cope, because you think of your own mortality. But then I remind myself that I’ve got Silver Charm living right there out my back window,” Blowen added. “How much better does it get than that?”

Jay Hovdey is a journalist, author and screenwriter in Southern California.