At first glance, Stephen Wilkes' photographs look like a single moment in time. It is only upon closer inspection that viewers discover that each of his works is actually the result of shooting thousands of photographs from a stationary position over the course of a day and stitching them together digitally to create one cohesive panorama. The painstaking task of editing all of this information and whittling it down into one image can take months to complete, but the results capture a sense of place that can't be expressed by a single frame alone.

"I’m interested in creating images that resonate with the way we actually see the world," Wilkes says. "I'm focused on how the eye sees and the scale in which we see the world. [In my photographs, I try to] create as much depth and peripheral vision as possible, like you’re looking through a window. Technology has given me additional megapixels that allow me to include things that used to be insignificant, making story telling that much deeper and richer."

Wilkes expands on this concept in his new book, Day to Night, which features panoramas of iconic places like New York's Coney Island, Moscow's Red Square and Arizona's Grand Canyon seen over the course of a day. Time-lapse photos these are not, as Wilkes carefully selects the exact frames he'll compile into the final image. (The book release coincides with "A Witness to Change," a photographic exhibition to be held at Bryce Wolkowitz Gallery in New York City beginning September 12.)

Wilkes spoke to Smithsonian magazine about his artistic process and how creating images that manipulate time and space offers a new take on how we view the world around us.

You photograph more than 1,000 single images to make one final photograph. What is your process like once you’ve snapped the last image?

The 1,000 or so images are just specific moments, but I usually have a pretty good idea once the last image is taken of how time will move in the final photograph. I also have certain moments in my mind that are going to be central in terms of the narrative of that final photo. Once I’m back at my studio, the editing process can take months. I shoot such broad frames that things I focused on initially, that I loved in the moment, I will later find that there might be other moments I’m missing. I actually get to rediscover my photos in some way through the editing process.

As I edit [using Adobe Photoshop], I begin to establish where day begins and night ends, and that’s where I start to build what I call the 'master plate.' I create a photograph based on the time vector, which can be on an X, Y or Z axis, and the final photo is created along that axis. Essentially what I’m doing is layering specific moments over the course of a day, but many of those moments are emptier with not as many people in them, so it gives me the ability to create a background plate and take the best moments based on time and put them together seamlessly. Once the master plate is complete, the final selection of moments get layered in. With the help of my retoucher, we’ll do as many as 30 revisions. The thing about my work is that once you see it in person, you don’t immediately feel that I’m compressing two worlds together. There’s a balance and a harmony to the final photo. I’m interested in creating images that resonate with the way we actually see the world.

Your project has a bit of a Where’s Waldo quality to it. Do you agree?

A lot of people feel that way about my work, because there’s a playfulness and joyful discovery aspect in my photographs. Also, there’s nothing automated to what I’m doing when I’m out shooting, it’s just me single cocking a lens, so the traditional mechanical aspect of photography is very much alive and well in what I do. It’s what I do at the end of the experience that is so radically different. I’m photographing in the most traditional manner—I see something and I document that moment. There are just hundreds and hundreds of moments in one of my photographs. 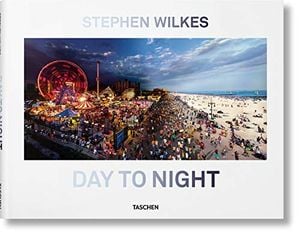 If you were to stand in one spot at an iconic location for 30 hours and simply observe, never closing your eyes, you still wouldn’t be able to take in all the detail and emotion found in a Stephen Wilkes panoramic photograph. Day to Night presents 60 epic panoramas created between 2009 and 2018, shot everywhere from Africa’s Serengeti to the Champs-Élysées in Paris, from the Grand Canyon to Coney Island, from Trafalgar Square to Red Square.

What's the most surprising thing you’ve found while reviewing your photos?

There’s always a surprise, especially when you’re capturing moments at such a high resolution. When I was shooting the Macy’s Thanksgiving Day Parade [in New York City], there’s an apartment building on 60th Street located on the right-hand side of the image. I clicked on the photo to check the focus and saw a family eating Thanksgiving dinner in the window. That’s the magic of it. I never have control of anything in my photos. Even though I do a tremendous amount of research before shooting, I live in the moment and capture what’s in front of my lens.

What are some of the obstacles you faced working on a project of this magnitude?

One is that not everyone wants you to bring a 150-foot crane into their backyard. Usually I'm looking for views that people haven't seen before, so I try to get a perspective that doesn’t exist from buildings or rooftops. A crane lets me see a scene in a unique way. Once I’m up there, I don’t move. [One of my assistants] will send up meals and water in buckets throughout the shoot.

The other is getting a location that really captures certain elements that I look for, which are a foreground, a middle ground and a background. Another one is weather. If I’m hanging from a crane and I get more than a 10-mph wind, I can’t take night photos because there’s too much vibration. So many things have to break right for me to be successful to take these pictures. If I’m not feeling a little bit uncomfortable, then I know that I’m not working hard enough. There’s never a given, and I have to bring my A game whenever I show up, so I surround myself with my whole team and assistants who have the same passion for it as I do.

In your book, you describe how you manipulate space and expand it like an accordion. Could you elaborate on this concept?

What I’m doing is essentially visualizing the space and time continuum to a certain degree. Albert Einstein described time like a fabric that gets bent and warped over time based on a gravitational field, kind of like a trampoline. The idea of fabric really hit me. I take that fabric and I flatten it into a two-dimensional plane. Amazing things start to happen when I meld time and the rotation of light and the color change of light. When you look at one of my pictures, there’s a three-dimensional quality and depth perception that traditional photography doesn’t capture. And that’s because I’m working with time and light rotation. Another thing I’ve discovered is that the color of light in my photos is very much like a score in a motion picture. I can actually make you feel time almost in a subliminal way. When you’re in a cool, blue light, your brain tells you it’s early in the morning or twilight. In my work, when you see that time and the color of light layer together, it creates a really dynamic thing in your eyes and mind. There’s a subtle change of light over time, but it’s compressed into a single image, so your eye goes back and forth a lot [when looking at one of my photos].

You’ve set your focus in recent years on the environment. How has being a photographer enabled you to have a front row seat to witnessing animal behavior and climate change?

Over the past few years, I’ve become really focused on capturing endangered species and climate change. I feel like there’s an opportunity for me to tell stories that can inform people and inspire them to see the world the way I see it and the way I capture change over time. I saw it firsthand when I was photographing over the span of 26 hours in the Serengeti. All of these different species of animals were sharing a watering hole and never once grunted at each other. Water is the thing that we’re supposed to have wars over, but this experience was very transformative for me because I realized that animals communicate at a level that we don’t really understand, and the act of sharing is part of their language. I came back from that project and was fascinated with whether I could capture more about that kind of communication in the natural world from day to night.

You recently photographed icebergs melting in Greenland, and the end result will be featured during your exhibition. What was that experience like?

I was in Ilulissat [a coastal village in western Greenland] during the great melt. The photo captures what it looks like when billions of tons of ice [either melted or calved] into the Atlantic Ocean. The scale is quite staggering. It was really challenging to photograph, since there's this misconception that icebergs are slow moving, but the truth is they move quite quickly. [When my team and I were] scouting for a shooting location, we hit the ground running because we knew in just a few hours the tides would change the position of the icebergs. If I wanted to capture what I was seeing right then, I had to get out and shoot immediately. There was no guarantee that the icebergs would be there in 24 hours. We found a remarkable view that overlooked the entire bay. The sounds we heard when the icebergs calved—almost like a building exploding—mixed with the sounds of hundreds of humpback whale blowholes while they gorged on the microorganisms coming off the glacier, and it was remarkable. We shot for 36 hours. Since it's summertime there, the sun never sets. This is my first day-to-day picture. Typically I try to capture the magic hour in the morning when the sky is red, but in Greeland when the sun sets it just sits there.