How the Pandemic Is Giving the Louvre Back to Parisians

With a steep drop in international tourists and new COVID-19 safety measures in place, the most visited museum in the world reopened yesterday 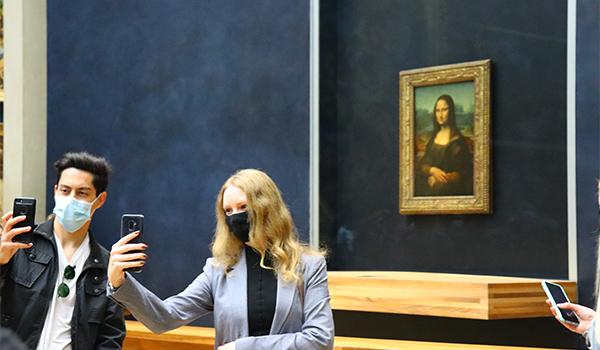 The global health pandemic has challenged the most visited museum in the world to draft new visitor guidelines that meet health and safety requirements. Vivian Song

At precisely 9 a.m. on Monday morning, as the doors to the Louvre reopened to the public for the first time since the pandemic forced its closure four months ago, a chorus of cheers and applause rang through the outdoor courtyard.

Moments before, the museum’s president-director Jean-Luc Martinez had made his way to the front of the line to welcome the Louvre’s first post-lockdown visitors Bertrand Arzel, 51, and his young daughter Pauline, who had been waiting patiently under the shadow of the iconic glass pyramid since 8 a.m.

“We wanted to see if we could be the first to enter the Louvre and see the Mona Lisa by ourselves,” Arzel said. “But to be honest I didn’t think we would really be the first in line.”

The elementary school teacher set his alarm for 6:15 a.m. yesterday morning to be able to get to the city from the Paris suburbs early, even though he had a confirmed 9 a.m. time slot. Arzel had booked the ticket online two weeks ago in anticipation of their visit—and in accordance with the new COVID-19 safety rules for visitors.

The global health pandemic has challenged the most visited museum in the world to draft new visitor guidelines that meet health and safety requirements like physical distancing and hygiene, without overly disrupting and dampening the visitor experience.

The result? While spontaneous visits may be out, so too are excess crowds, mile-long queues and hour-long waits.

From now on, like movie tickets, visitors are required to purchase their tickets online and book a specific time slot. Only a limited number of tickets will be sold on-site during off-peak hours but admission is not guaranteed. On reopening day, all 7,400 tickets were sold-out.

The other big visible difference: masks. All staff and visitors over the age of 11 are required to wear one. Visitors are responsible for bringing their own.

While passing through security, visitors are required to use hand sanitizer from dispensers before entering the palace. Floor markings guide visitors with social distancing, while new signage is meant to minimize backtracking and overcrowding by directing visitors along their itineraries.

This is most notable in the Salle des Etats, where the museum’s star attraction, the Mona Lisa, is displayed: Visitors enter and exit through separate doors.

“These measures are the best way to visit the Louvre safely today,” Martinez told the international media assembled for the reopening.

Since closing March 13 and in the months that followed, a strange and unfamiliar stillness had descended on the Louvre with the closure of borders and the mass exodus of tourists. Playful tourists posing as though they were pinching the peak of the pyramid and the large herds of tour groups carving a path through the court had abruptly vacated the royal grounds.

Of the 9.6 million people who visited the Louvre last year, 75 percent were international tourists, including a sizable number of visitors from the U.S. China, the EU, Brazil and South Korea. But countries like the U.S. and Brazil are on the European Union’s no-fly list, banned from visiting due to their poor domestic management of COVID-19, while international tourists overall may be skittish about traveling throughout the pandemic.

Though the steep drop in international visitors bodes badly for the bottom line—the museum lost 40 million Euros during the four-month shutdown—it’s a boon for Parisians and French residents who are able to reclaim the Louvre to themselves for the time being.

Parisian Georges Lepré, 78, holds a membership card and said that before the closure he normally visited the museum around three times a month.

“After four months, I wanted to see my friend again,” he jokes pointing to the Mona Lisa in the Salle des Etats. “She’s very patient and hasn’t changed.”

Monday’s visit provided Lepré the rare opportunity of studying the Mona Lisa up close, without having to jockey for elbow room and jostle for space.

“I normally see just her smile from afar and pass very quickly,” he said. “It’s been years since I’ve seen her this close. It’s very moving.”

Indeed, without the crowds, the museum’s 484,400 square feet have become a visitor’s playground, with more room to stroll at a leisurely pace and less heads competing for prime viewing space in front of some of the museum’s most popular pieces.

“There are a lot fewer tourists so it’s a lot calmer. It’s wonderful to experience all these masterpieces like this. The ambience is extraordinary,” Lepré said.

For rooms and collections where physical distancing is impossible, the museum has closed public access. They include French sculptures of the Middle Ages and Renaissance, arts of Africa, Asia, Oceania and the Americas and the lower level of Islamic art. But that still leaves visitors with 32,000 artworks to peruse including crowd favorites like the Mona Lisa, The Winged Victory of Samothrace and Venus de Milo.

Getting ready for prime time

Martinez estimates it will take the Louvre three to four years to recover from the four-month closure, the ensuing drop in tourists and daily cap on visitor numbers. Previously during peak season, the museum received up to 40,000 visitors a day. Right now, tickets are capped at 500 per half hour. But he expressed optimism that the Paris 2024 Summer Olympics will help the Louvre regain its traffic numbers.

“The Olympic games is a very big event, and the perfect occasion for us to welcome visitors differently,” Martinez said. For the Olympics, the museum plans to open up more rooms within the palace and expand its opening hours, which normally run from 9 a.m. to 6 p.m., six days a week. Spaces that are currently closed to the public, including an 18th century outdoor garden between the Louvre and the Seine and another outdoor courtyard, will also be opened to give visitors more ‘breathing’ room and space to move, he said.

In advance of its grand reopening Monday, the museum underwent a deep spring cleaning. Monuments were dusted and polished, window washers were dispatched to clean the glass pyramid and the escalators got thorough wipe-downs.

“We wanted to clean our house just as you do when you invite friends into your home,” Martinez said.

Though they were unable to visit the museum’s hallowed halls during lockdown, between March and May, art lovers sheltering in place around the world helped smash the Louvre’s record for virtual visits. The museum registered 10 million visits during the three month-period, compared to 14 million virtual visits for all of 2019. The bulk of international virtual visitors were from Italy, Spain and the U.S.

Meanwhile, for returning and first-time visitors, the Louvre has also introduced a series of free 20-minute guided tours around select permanent collections eight times a day as part of its reopening. Themes include the history of the Louvre, ancient Egypt, French and Italian masters and treasures of the Louvre.

But opening day didn’t go completely without a hitch. Not long after doors opened, a large group of Paris tour guides appeared in the court of the Louvre to draw attention to their plight. Holding photos of the Mona Lisa and wearing masks bearing X marks, the guides were protesting to ask the French government for more financial support given that closed borders and weakened consumer confidence in travel had decimated their livelihoods.

Not all visitors on opening day were from France. A group of college-aged friends from Brazil, currently living in Portugal, were also among the first in line Monday morning. The unusual calm around the Louvre confused the women at first, who were expecting to have to beat the crowds.

“It’s the most famous museum in the world so I’m super excited,” said Giovana Nasser, 22. “It is such a huge symbol in the world and in history.”

Likewise, Sander Bortier and his companion drove 4.5 hours from Belgium on the eve of the opening, just to visit the Louvre. They would drive another 4.5 hours back home on the same day. Bortier, who works in the Belgium art world, has been to the Louvre several times but said he couldn’t pass up the opportunity to visit on reopening day.

“It’s strange to see it so empty,” Bortier said, “but it’s also such a unique possibility to be able to be more or less alone with these artworks.”