Even before Prohibition, erstwhile distillers were gathering in secret locations throughout rural areas in the south, brewing up homemade spirits to sell under the radar and away from alcohol taxes and bans. The drinks were made under the light of the moon, in hopes that no one would detect smoke rising from the stills and ultimately bust the operation—a practice that earned the booze its name “moonshine.”

Moonshining dates back to the 1700s, when officials imposed taxes on liquor sales. Farmers and immigrants throughout the south took to making their own batches to sell for extra money, tax free, to counteract the effects of extreme poverty in the region. And with the introduction of Prohibition, production skyrocketed, creating a thriving black market business for secretly distilled hooch.

Each hidden distillery needed to use runners—drivers in understated or otherwise ordinary-looking cars who could smuggle moonshine from the stills to thirsty customers across the region. On the outside, the cars looked “stock,” normal enough to avoid attention. But inside, both the mechanics of the cars and the drivers behind the wheel were far from ordinary. The vehicles were outfitted with heavy-duty shocks and springs, safeguarding the jars containing the hooch from breaking on bumpy mountain roads. The seats in the back were usually removed so more booze could fit. And high-powered engines gave the cars extra speed to outrun any cops and tax agents along the route.

As for the drivers, they knew every path in the area like the backs of their hands, able to outpace those in pursuit, even turning off headlights and still successfully navigating. They became known for their high-speed reckless driving—coining maneuvers like the bootleg turn, in which the drivers would quickly turn the car around in a controlled skid, either to elude the cops chasing them or to play a game of chicken with them, driving head-on at full speed until they abruptly changed course. When the runners weren’t smuggling alcohol, many spent their free time racing other runners for bragging rights.

From the 1930s on, once Prohibition had ended, demand for bootlegged alcohol waned and the runners found themselves with souped-up cars yet out of work—though they continued to take part in organized races. On December 14, 1947, one of these runners, Big Bill France, held a meeting with other drivers, car owners and mechanics to finally put in place some standardized rules for the races—thus NASCAR, the National Association for Stock Car Auto Racing, was born. The first official race was held two months later.

In January, Arcadia Publishing released North Carolina Moonshine, a book about the Tar Heel State’s role in firewater history, covering everything from the NASCAR connection to local moonshining celebrities. In the book, the authors mention a secret garage hidden in the woods by the North Carolina-Virginia state line, which had opened in the 1930s and specialized in moonshine cars.

“This garage was operated for over 35 years by a shrewd, large and [purportedly] wily mechanic named Jelly Belly, who provided moonshine runners near and far with powerful cars that were almost untouchable,” authors Frank Stephenson Jr. and Barbara Nichols Mulder write.

Today, that garage is long gone, but modern explorers can still find remnants of moonshine operations tucked into small nooks alongside rivers and in caves throughout Appalachia and the Blue Ridge Mountains. They can be hard to find, and nearly impossible to determine if the wreckage is, in fact, an old still—or just a pile of rubbish and scrap metal. Instead of scouring the mountains yourself, check out these spots that bring moonshine history to life. 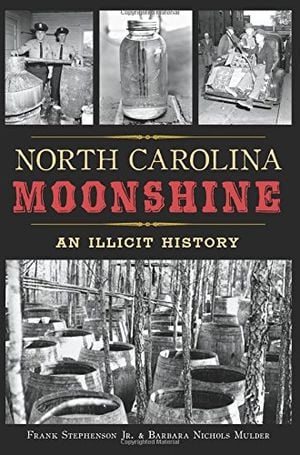 This year is the 50th edition of the Mountain Moonshine Festival, slated for October 27 to 29. Legendary NASCAR drivers attend this festival to meet fans, and the organizers put together one of the largest collections of authentic moonshine-hauling cars in the country. They even mock up an old-time moonshine run for the weekend. The entire event benefits Kare for Kids, an organization working towards improving life for local children.

An actual moonshining family in the area started this Georgia distillery. Although the sale of their liquor is legal now, the distillers continue to make their product using old family recipes passed down over nine generations to the current owner. Visitors can’t buy the spirit on site, but can take a tour and try a tasting.

During prohibition, bootleggers in Georgia's Dawson county ran millions of gallons of moonshine from the mountains to Atlanta. Some activity continued even after the 18th amendment's repeal and into the 1930s and 1940s. Today, hikers heading to the county's Amicalola Falls, a beautiful cascading 729-foot waterfall, can see what remains of a 1940s bootlegger truck that slipped off the road and down a 200-foot slope, smashing into a stand of poplar trees. The truck, rediscovered in the 1970s, was found with several intact moonshine mason jars. To see the wreck, follow the main trail to the falls, looking up and to the right about halfway.

The team at Chimney Rock State Park has set up a replica still and moonshine operation, dubbed Moonshiner's Cave, inside this fissure cave in Hickory Nut Gorge. Moonshiners were common throughout this part of the state, and while there isn't evidence that this specific cave was used, they worked in caves like this one throughout the gorge. A similar cave, said to have remnants of an actual still in it, can be found near Moonshiner’s Arch in Red River Gorge in Kentucky. And at Devil’s Den State Park in Arkansas, hikers can visit another moonshiner’s shelter—a stone building built into a rock overhang by distillers in the 1900s.