For nearly a century, park rangers have relied on dogsledding to patrol the public land and collect data for scientists 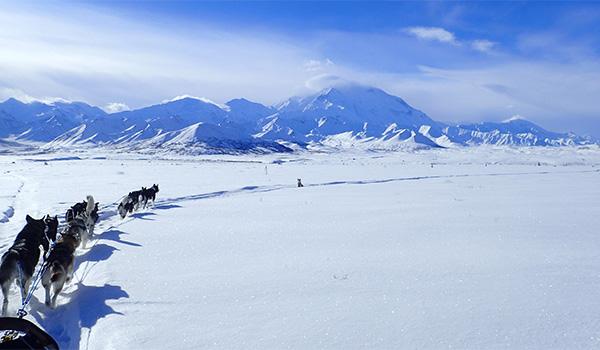 Denali's dogsled teams mush for weeks at a time to the far-flung corners of a park that stretches over 6 million acres. National Park Service

David Tomeo arguably has the best coworkers. They are excited about their work, and they never talk back.

That’s because they are sled dogs, some of the roughly 30 Alaskan huskies employed by Denali National Park and Preserve and the only in all of the 419 national park sites in the United States.

This fall, Tomeo became the new kennel manager for Denali, responsible for educating the public on this 98-year tradition, training the team, and now that it’s nearing winter, mushing for weeks at a time to the far-flung corners of a park that stretches over 6 million acres. The Denali sled dog team patrols to keep the public land safe and collects important data for scientists.

While new to the role, Tomeo’s not new to the park—this is his 22nd year in Denali. Previously, he was the Director of Education Programs at the Murie Science and Learning Center near the park's entrance, 12 miles south of Healy, Alaska. He also spent prior winters visiting the 18 patrol cabins (where he and other teams can warm up and resupply before going patrolling deeper into the park), some of which have been around since the building of the park road in 1923, with his own team of sled dogs. Spending all day with a pack of dogs might seem like a dream, but the job comes with a number of important prerequisites, chief among them a prodigious knowledge of dogsledding, dog care and wilderness expedition travel, and the ability to convey to visitors the importance of dogsledding to conservation.

Historically, Denali’s sled dogs were used to patrol for people participating in illegal activities within the park. When President Woodrow Wilson established the park in 1921, it had just one employee: superintendent Henry Peter “Harry” Karstens. One of Karstens’ first duties was to set up boundary markers by dogsled to let people know this was protected land. The area was designated as park land to protect from overhunting of the Dall sheep that are indigenous to the region, so being vigilant for poachers was an important job function. These days illegal hunting is fairly unusual; no hunting is permitted in Denali National Park. Now, in the frigid off-season, usually considered mid-September to mid-May, the seven rangers who work in the park’s kennel primarily cut trails and do check-ins with the hardy explorers who decide to venture into the vast wilderness that makes up the third largest national park (after Wrangell-St. Elias and Gates of the Arctic, both also in Alaska).

“The more trails we can get out there and break open, the more they can get out,” Tomeo says. “We can help them find the best places to go, because route finding is certainly a challenge.”

In addition to helping visitors enjoy the national park, another duty of the crew—three full-time employees, three Student Conservation Association interns, and a backcountry ranger from another program—is to assist with scientific projects. This winter, one of their biggest projects is helping NPS biologists and Laura Prugh, a researcher for University of Washington, to collect data on mesocarnivore populations in the park. For that project, the rangers are collecting scat samples and recording where each was found in the park and the depth of the snow at that location—all to be sent to Prugh for DNA analysis needed to build a database of carnivore populations and their range within the park. The crew also measures snow depth for a long term vegetation study, mans a traditional weather station, and records observations of Canada Jays, a winter resident bird of interest to the park avian ecologist, around the kennel. Scientists train the rangers to do what data collecting they need. Occasionally, the dog teams transport scientists to field sites within the park, along with their equipment.

Following the 1964 Wilderness Act, which set aside land across the country where no permanent roads may be built, nor any motorized or mechanized transport be used to visit, the dog teams became all the more important. They allow rangers to travel throughout the park in a way that doesn’t leave an imprint on the land. Not all of Denali carries the designation of “wilderness area,” just the original two million acres—the remaining four million acres are still managed as such though.

“The intent is to keep the area intact—a natural ecosystem without the kind of high impact of human inventions, like helicopters and vehicles,” Tomeo says.

Dogsledding has long been considered a traditional mode of travel within the 49th state. And allowing the dogs to serve as ambassadors, Tomeo’s crew is able to teach visitors about the importance of wild lands.

Due to Covid-19, the kennel has been closed to the public since March. Typically, visitors to Denali can drop by the kennel, located three miles into the park on its only road, year-round. In the summer months, which in recent years have seen up to 70,000 visitors, rangers hold three demonstrations each day, educating the public on the history and importance of dogsledding in Alaska and how the dogs are uniquely adapted to the work.

During the summer, guests can use a free bus to travel to the kennel from various points in the park, though it’s also possible to drive or walk there throughout the year. On the kennel grounds, each of the dogs has its own house resembling a log cabin and bearing its name. A long leash attached to a pole near the dogs’ doors gives them room to rove around, without getting too close to their peers. The dogs are friendly, but keeping them at just enough distance from each other means they can’t sort out who is the alpha (meaning they stay at the same social level), they don’t sneak each other’s food, and no accidental pregnancies occur. The puppies get their own pen to play and socialize.

New litters get plenty of face time with people, so that the dogs are unbothered by the bands of travelers who weave between their homes all day. This year, the kennel didn’t have a new litter —the female they’d chosen to breed with a dog from another kennel didn’t go into heat. It might have actually been a lucky break for the kennel; now the rangers have more time to evaluate the current dogs to decide who will breed next (ideally in the spring or late winter, so they’re big enough to run next to the team in the fall). The breeding program is informed by genetic testing, not unlike 23andMe, that’s able to tell rangers a great deal about their dogs. It helps them pick for valuable traits to carry onward.

The Denali dogs, while genetic cousins, are very different from most of the other sled dogs around the state. Dogs that participate in racing, like the Iditarod, are bred for long distance running. The dogs of the national park were bred for freight hauling—they are larger and have a heavier coat. Tomeo argues that they are a bit tougher, too.

“It’s like the difference between a sports car and a Mack truck,” Tomeo says.

At the end of October, Tomeo and his team were listing out desirable traits to consider in deciding which animals to breed next. The most important are size, moderate temperament, motivation and pull drive.

The Denali program retires dogs fairly young compared to other kennels. Part of that, Tomeo says, is the benefit of having so many people (largely former park employees or locals) who love the dogs and who put in requests to adopt various dogs years before they’re ready to retire.

“We have this great advantage over other kennels in that we can retire dogs and know they’ll go to a great home at about nine years old,” Tomeo says, adding that if dogs show signs of not enjoying the work, they’ll retire them even earlier.

Tomeo and his team of six human helpers prep the dogs for a busy winter season. In early fall, the dogs pull metal carts that look somewhat like the frame of ride-on lawnmowers between dormant campgrounds and on the park road, before switching to ATV four-wheelers in neutral when snow begins to accumulate. During this time, they do just five to nine miles a day and that year’s puppies run alongside, to get a feel for the work.

Usually around late November or early December, there’s enough snow that teams are able to start doing patrols that range from one to five nights away. By March, when the snow is starting to dissipate in much of the Lower 48, Alaska has peak snow and physical conditions for dogsledding, allowing the team to spend up to three weeks straight patrolling the farthest reaches of the protected public lands. Tomeo and his teams will scout the entire park, an area larger than the state of New Hampshire.

“That’s when the fun really begins for everyone,” he says. “The dogs live for this time.”