Christmas is a remarkably adaptable holiday. The ways in which we celebrate can be totally unrecognizable from one region, culture or community to another. It was this fact that inspired me to write The Atlas of Christmas, which maps out these diverse, sometimes quirky, traditions and mythologies, from dragging a yule log through the streets in Latvia to donning a horse skull and going door to door reciting poetry in Wales.

The variety in the festivities is perhaps best reflected in some of the distinctive games played during the holiday from one place to the next. Holiday parlor games have never been as central to Christmas in the United States as they had been in England. Nineteenth-century games such as Blindman’s Buff (in which a blindfolded contestant tries to catch another partygoer) and How, When and Where (in which a player must figure out what their friend is thinking of by asking questions) are among those Charles Dickens discusses in A Christmas Carol, but there is little evidence they ever caught on in the U.S. the way so many other Victorian holiday traditions did. However, this year might be an opportune time to look to other countries for some entertaining ways to pass the time, when many people are staying indoors and avoiding their usual holiday get together with friends and family.

Consider trying one of these holiday games from around the world.

Create a version of a Bulgarian survachka, a decorative stick made by bending and tying a branch from a cornel (or dogwood) tree into a shape resembling the Slavic Cyrillic letter Ф. The youngest member of the family—traditionally a boy, but nowadays girls as well—takes the survachka and lightly pats the backs of their family members, beginning with the oldest person and making their way to the youngest and even the family pets and livestock. As the child goes, they sing a song or recite a poem full of good wishes for the New Year, expressing hopes of prosperity and good health for each person.

In Colombia, Christmas gatherings usually involve aguinaldos, or “bonuses”—simple games in which competitors try to outmaneuver their friends or family members. For example, one classic aguinaldo is called si o no (translation: yes or no); one player must go an entire evening without saying “yes” and his partner is prohibited from saying “no”—or both players must avoid using both words. Whatever the rules, each player will get creative finding ways to get the other to say the taboo word. In the game tres pies, or “three feet,” a competitor earns points if he is able to surreptitiously slip a foot between yours when you’re not paying attention. Another option is pajita en boca, in which someone has to put a piece of straw (or candy or some other simple object) in their mouth whenever their partner says the game’s namesake phrase, meaning “straw in mouth.” Whoever keeps the straws their mouth the longest wins.

You can also celebrate Christmas as the Spanish do, by buying a lottery ticket. Lotería de Navidad—the Spanish Christmas lottery—is the largest annual lottery drawing in the country, earning it the nickname “El Gordo” or “the fat one.” An estimated 75 percent of the country’s adults participate. Purchasing a ticket and gathering around the television with family awaiting the announcement of winning numbers is as closely associated with Christmas as tinsel and eggnog are in the U.S.

While children receive gifts from Saint Nicholas in the Netherlands, the adults exchange “Saint Nicholas poems.” A person will write a poem specifically for another family member or friend, reading it aloud as the other person unwraps a gift. Such personalized lines of verse probably sound like sweet gestures, and in many cases sinterklaasgedichten are wishes for health and good fortune. But more often, these poems are used to tease friends and family members, bringing up embarrassing memories or highlighting their less-flattering characteristics. It is the perfect opportunity to needle that cousin about all the baby photos they post on Facebook or bring up the way your brother chews his food with his mouth open. The poem is read as the subject takes part in another Saint Nicholas’s Day tradition known as a “surprise.” That’s the term applied to the novelty gifts exchanged at the gathering. The “surprise” itself is far less important than the way it is wrapped: A small gift could be frozen in a block of ice, or an elaborately wrapped box could contain just a slip of paper with a clue about where the real gift is hidden. All the festivities can take hours, and the rewards tend to be in expressing one’s creativity for friends and family.

While pumpkin carving is a familiar tradition during Halloween, in the Mexican city of Oaxaca, Christmas is celebrated by creating elaborate sculptures with radishes. As part of the city’s annual Night of the Radishes, held on December 23, the root vegetable serves as the canvas for detailed characters and elaborate nativity scenes. The day of the event, the carvers set out their sculptures in the historic Zócalo plaza, and by late afternoon, lines of onlookers have formed around the block. By 9 p.m., the winners of the various categories are announced, with each receiving a cash prize (the grand prize winner can take home more than $1,000), and a full-blown party kicks in with music, fireworks and light shows throughout the square. But those artists who failed to earn a prize can still feel like winners: most works are purchased by attendees to take home and use as a centerpiece for Christmas dinner.

This year, while international travel is inadvisable—let alone large gatherings such as Night of the Radishes—you could consider turning the kitchen table into your own venue for a radish-carving contest between members of your family. As the holiday traditions around the world show us, it doesn’t take much to find fun—and some healthy competition—during Christmas. 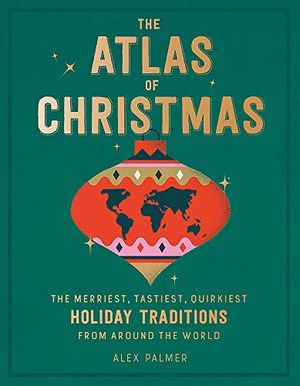 The Atlas of Christmas: The Merriest, Tastiest, Quirkiest Holiday Traditions from Around the World

Discover the fascinating (and sometimes downright odd!) ways that people and nations celebrate the holiday season and share this festive compendium's unique traditions together with family and friends.