When George Schaller was 23, he volunteered to help some naturalists survey part of northern Alaska’s Brooks Range, a historic expedition that contributed to the federal government’s decision to set aside 30,000 square miles of wilderness as the Arctic National Wildlife Refuge. Home to a staggering array of flora and fauna reflecting all major habitats, the area is a rare example of a natural environment free of human development. Reached recently at his Connecticut home, Schaller, now vice president of the wild-cat-conservation organization Panthera and senior conservationist at the Wildlife Conservation Society, discussed the “precious, intangible values” he fought to protect in the 1950s and cautioned that the battle to preserve the coastal plain isn’t over.

Of all the places in the world, why did you volunteer to visit the upper Sheenjek River of Alaska’s Brooks Range in 1956? What were you expecting, and what did you find there that was unique?

I attended the University of Alaska from 1951 to 1955. And in 1952 a friend and I took a canoe down the Colville River to the Arctic Ocean. We passed an oil exploration camp. So I had been wandering all over the state during those years, and seeing an oil exploration camp in a huge, beautiful wilderness startled me.

When I heard that Olaus Murie, one of the great field naturalists of the last century, was going to go up to into the Brooks Range to do a wildlife survey to set aside what first became the Arctic National Wildlife Range, I wrote to him and said, ‘Hey, I’d come along. I don’t need a salary. I just want to come up there, enjoy it, and learn from you.’ [The Wildlife Conservation Society sponsored Schaller’s trip.]

How did that trip influence what came after?

We had a marvelous summer, and we talked to the local Gwich’in Indians there in a village called Arctic Village. And they talked of the caribou, how their life depends on them, and the Arctic Slope they called the “Sacred Land Where Life Begins.” And all that stuck with me.

When I came back, I thought about it. There was this discussion about the Arctic Refuge—people had since the 1930s suggested the place be set aside. So I wrote Secretary of the Interior Fred Seaton in 1957 and said, ‘Hey, you’ve got to protect that area.’ And thinking about the oil exploration camp I had already seen on the Arctic Slope, I said, ‘That area may well in future years resemble one of the former Texas oil fields.’ The Eisenhower Administration established the Arctic Refuge in 1960. This happened just in time, because a major oil discovery was made at Prudhoe Bay in 1968. I couldn’t believe the horrendous environmental damage there when I visited in 2006. It’s 800 square miles of buildings and roads and pipelines and drilling pads and oil spills. It’s a dreadful place. It will never, ever be fixed up. So now is the time to protect the coastal plain. It has been a horrendous battle since Secretary Seaton established the Arctic Wildlife Range [now the Arctic National Wildlife Refuge] in 1960.

What did you find in the range that was unique or untouched that made you fight for its preservation?

We had two aims in the Sheenjek Valley. One was to learn about the natural history. And so Brina Kessel, who was an ornithology professor at the University of Alaska, and I did bird lists. We saw 85 species of birds there. I collected spiders, insects, mice for the University of Alaska Museum. It is a highly diverse and beautiful area, ecologically very diverse. There was spruce forest, alpine meadows, glaciers. There were three kinds of mosquitoes, which were very noticeable. It was a huge variety.

But then, you know, the Alaska delegation to Congress has been against anything that protects. The lies and distortions by congressional members from Alaska as well as the oil companies! This well-known senator, Ted Stevens, he said, “It is a barren desert, a frozen wasteland.” And he knew better.

Some people support tapping into petroleum reserves to strengthen the economy. Why not?

Well, it’s more than that. In 1960, after the Wildlife Range was declared, they stopped any payment for that area to manage it, to protect it, from 1960 to 1969. Now if there is anything more undemocratic, it is that. Because most people want that range. And it’s wholly unpatriotic. Unpatriotic. Because it deprives America of a future wilderness. [Alaska] is not called the Last Great Wilderness for nothing.

The House of Representatives in February took a historic vote to protect the Arctic National Wildlife Refuge’s coastal plain as wilderness, but they lacked a majority. How seriously is the area threatened by outside interests?

Anything in Congress these days is a battle, because you’ve got too many petro-politicians. Why do we still have this battle? You had two Bush presidents that were all for drilling and promoted it. The Alaska delegation is against [protecting the Arctic National Wildlife Refuge], and you don’t know who is being bought off, so to speak. What I’m afraid of is a filibuster. Then it’ll get stopped again, and the fight will continue forever. I don’t know how many years.

But the important point is the caribou and the grizzlies—they are all still there. Just as they were years ago. People spend millions of dollars to go to Yellowstone to see wolves; they used to come up near us just to see who we were, up in the Arctic Refuge. The last time I was there, in 2006, you could climb up on top of a mountain and as far as you could see, there were only the mountains and the valleys. There were no roads, no buildings—the only roads were those made by Dall sheep and caribou. And that’s tremendous.

It was managed by the Fish and Wildlife Service, and they did a fine job. You’re not supposed to build fires. You’re supposed to carry out all your garbage, even carry out your feces. They did a great job of managing it. Where else can you go back after 50 years and see no changes, step into America’s past?

How has the refuge changed over the decades?

Well the fact is, in 50 years the glaciers have retreated, the brush and trees are moving up slopes, the tundra permafrost is melting. We talked to the Gwich’in Indians, and they said ‘Yes, it’s much warmer.’ And even a bluebird had shown up at their village, which had never been seen before. So there are real changes. And it’s wonderful to have a place where you can measure such changes without outside influence.

We measure how far glaciers have retreated in national parks, for instance. How is this region different?

What other place do you have that is undeveloped, that is simply a national treasure, that is not for exploitation? Yes, you can have some camping trips, people go up there and enjoy it, run the rivers and so forth. But you don’t need big development, roads, big tourist accommodations, and so forth. Let’s leave something for people to escape all this. That’s the perfect place and the last place in the United States.

Can you share a powerful or inspiring moment you had when you were there in 1956, 2006, or some other time?

There are so many uplifting ones. I remember one time in 1956: I went off for a week, just carrying my food and a sleeping bag. I was sleeping at night on a gravel bar, and I heard water rushing near me, and I sat up. It was a big herd of caribou migrating. I lay back down, and they passed my sleeping bag, within 50 feet or so. This big herd had moved on. Now where else can you get an experience like that?

You’ve called it America’s last great wilderness. What is still to be discovered or uncovered there?

Olaus was a naturalist. He wanted the science, but he also talked of the “precious, intangible values of this area.” And it was still untouched. Yes, the local Gwich’in Indians hunted caribou, they shot some wolves. But there were no roads. There was just one village at the edge of the area, Arctic Village. You can see the natural environment before people chopped it up, plowed it out, shot it down, and so forth.

Do you destroy something eternal for a couple hundred days? It’s a problem in every single country where I work. You have the battle, the dream, those that just want to make quick money, those that are concerned about their country. Oil companies have been trying to get into the Arctic to drill. But natural resources are finite and gone quickly. Unless you plan intelligently, you lose in the end. 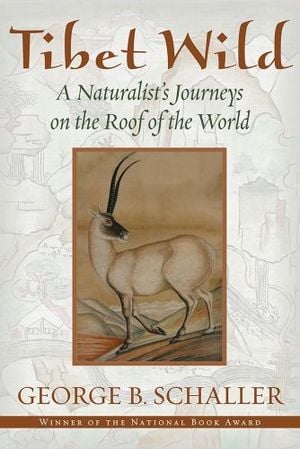 Tibet Wild: A Naturalist's Journeys on the Roof of the World