For 50 Years, Dogsled Teams Have Been Testing Their Mettle at the Iditarod 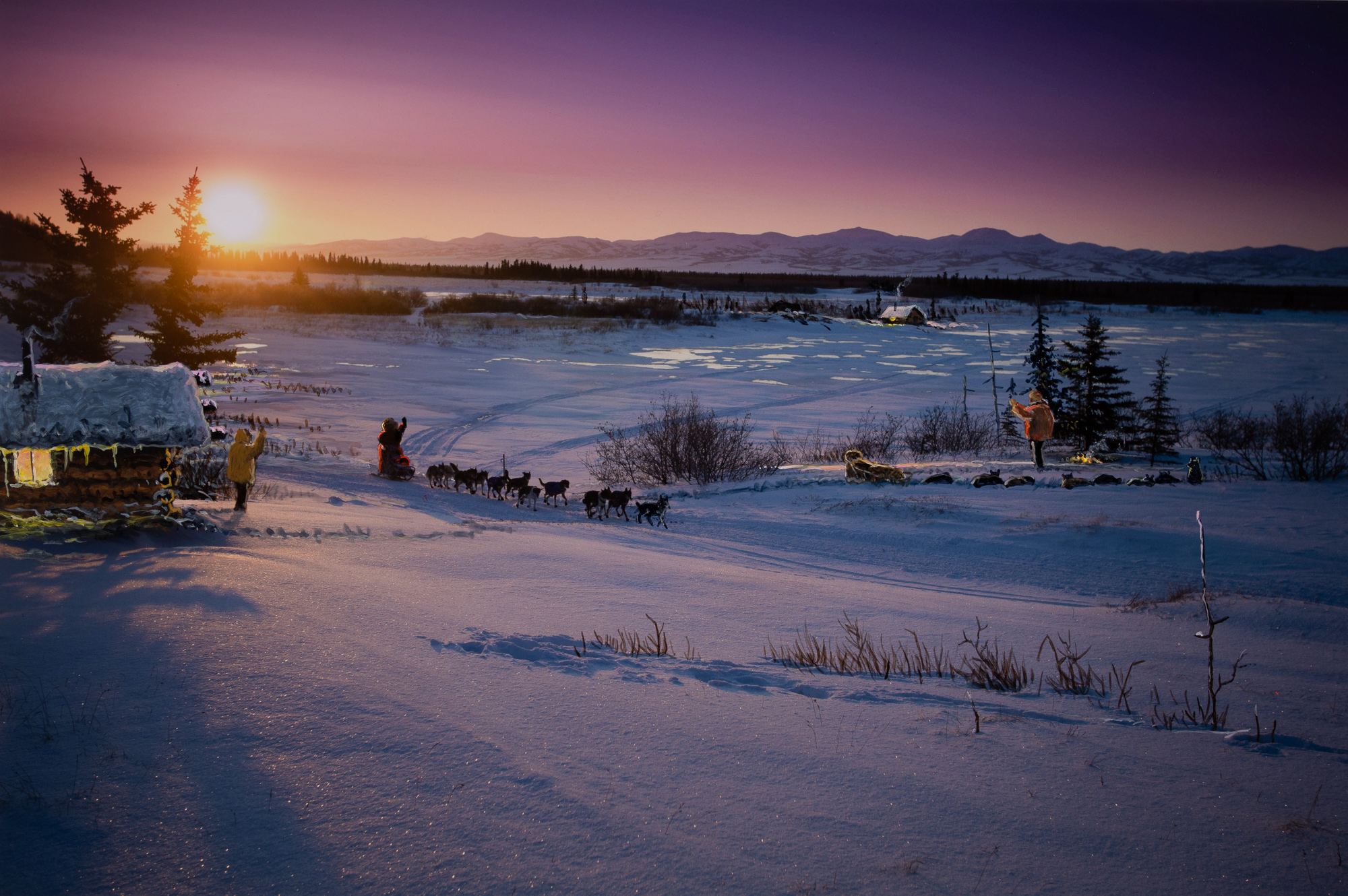 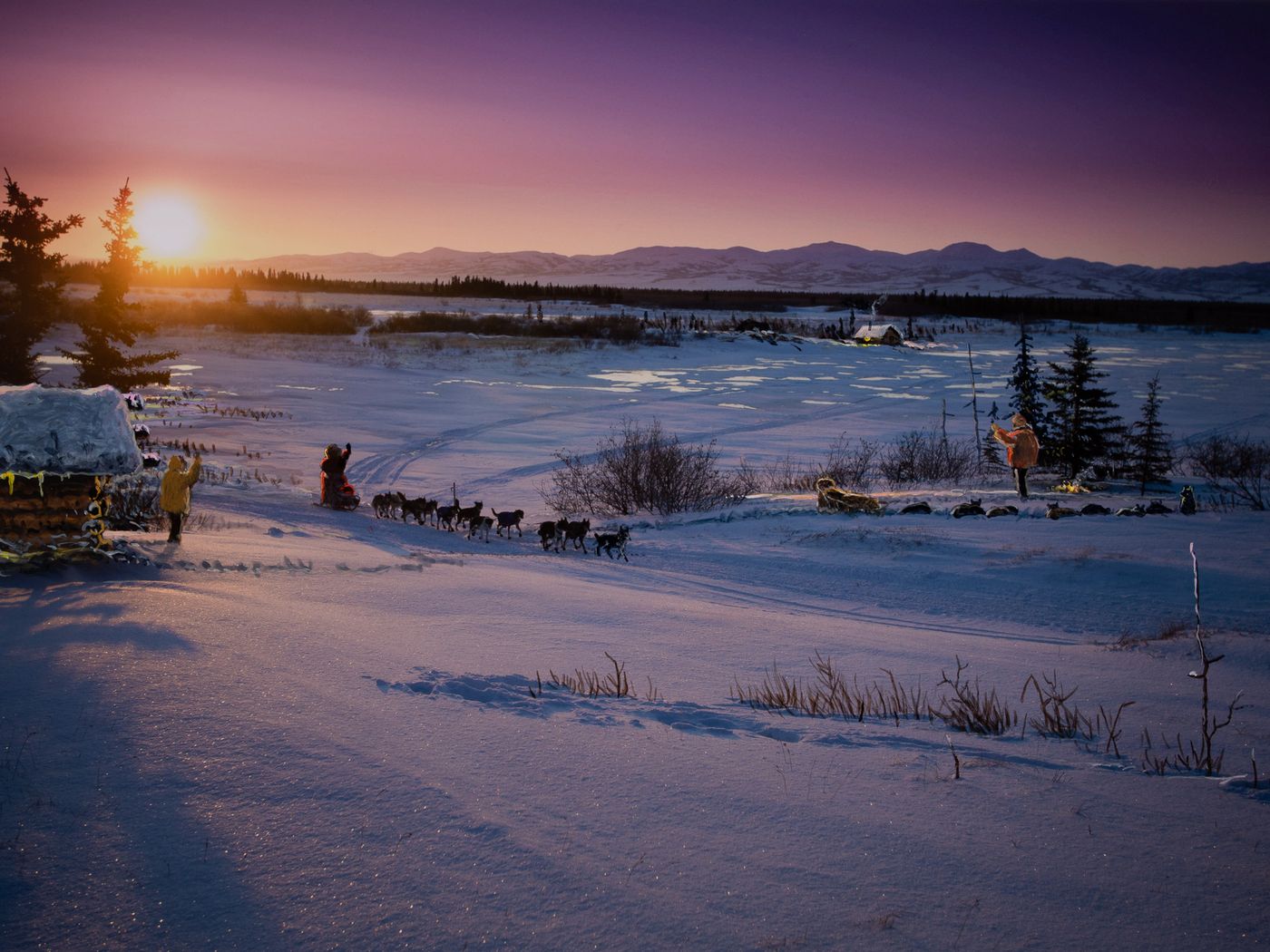 In 1973, 34 sled dog teams lined up in Anchorage, Alaska, for the adventure of a lifetime: competing against one another to be the first team to reach Nome, approximately 1,000 miles to the northwest. It was the inaugural Iditarod, and at the time no one knew for sure how long it would take to complete the treacherous journey through sub-zero winds and dense snow. While the U.S. Army volunteered to help clear certain sections of the route, the mushers were largely responsible for breaking their own trails, while also hauling their supplies in their sleds.

The race course was so dangerous and desolate that it wasn’t uncommon to go days without seeing another soul; one-third of the competitors dropped out before reaching the finish line. Ultimately, it took the winner, Dick Wilmarth, a 29-year-old miner and trapper, about three weeks to cover the distance, snaring beaver for sustenance and using snowshoes in some sections to help clear the trail for his dogs. He revealed in a 2001 interview that he entered the race on a whim because he thought it would be “a pretty neat thing” to do.

In the five decades since, a lot has changed. Today, mushers rely on GPS to stay on course and are in constant communication with their support team, which helps coordinate supply drop-offs at designated checkpoints and regular veterinarian checkups for the dogs. The route is also well defined by markers and signs, and helicopters follow overhead to keep eyes on the ground and intervene in an emergency. (Teams take what’s called the “Northern Route” in even-numbered years and the “Southern Route” in odd years.) Subscribers to the Iditarod Insider even have access to a live feed of the event online.

“During the first race, people were wondering if anyone would even make it to Nome,” says Mark V. Nordman, the Iditarod’s long-time race director and marshal. “Now people finish it in under nine days. Like any sporting event, there’s always improvements like equipment and the quality of the trail that’s put in. I don’t want to say that the dog care has improved, it’s just that we enhanced our veterinary program so much—it truly is about taking care of the dogs.”

Nordman has a long history with the race, completing his first as a musher in 1983 in 18 days followed by four subsequent entries between 1991 and 1996. He’s served in his current capacity for decades, and has seen the Iditarod evolve from a little-known race in the wilds of Alaska where ham radio operators would give the blow-by-blow of the race over the AM airwaves to the longest and arguably most iconic annual sled dog race in the world, luring teams from Alaska and beyond to test their mettle against the often unforgiving elements.

“When it first started out, a lot of people thought it would be one-and-done,” he says. “But there’s a passion for it across the state. It’s our Stanley Cup. It’s our Super Bowl.”

Traveling by way of dog teams has long been a part of Alaska’s heritage. Since much of the state isn’t serviced by roads and highways and remains inaccessible, residents in remote areas came to rely on dog sleds to get them from point A to point B. However, with the introduction of the “iron dog,” or snowmobile, in the 1960s, the need for dog teams began to wane. The late Dorothy G. Page and Joe Redington, Sr., known affectionately as “The Mother and Father of the Iditarod Trail Sled Dog Race,” created the event as a way to help preserve and protect sled dog culture and the working dogs that define it. The original race followed the old Iditarod Trail dogsled mail route, forged in the early 1900s, that stretched across the state; today’s course passes through multiple mountain ranges and crosses numerous frozen waterways and ice packs (sea ice).

This year’s race, beginning March 5, is particularly pertinent since it marks the event’s 50th year. The 50 teams entered as of writing will follow the race’s usual 1,049-mile route. (Because of the pandemic, the 2021 race was shortened to an out-and-back course of 852 miles and didn’t have its typical ceremonial start.) In order to participate this year, all competitors, as well as volunteers and other personnel, must be fully vaccinated.

Like Nordman, Jon Van Zyle, an acrylic painter who has lived in Alaska for 43 years, also has a long history with the race. Van Zyle competed in 1976, finishing the race in a little over 26 days without the help of a compass (or any of the other bells and whistles mushers use today). The next year, he approached the race committee, which he jokingly describes as “three people and a dog,” about creating a poster to help promote the event.

“At that time, very few people knew about it,” Van Zyle says. “I had an idea to raise money, since my artwork was starting to become popular in the United States.”

That 1977 poster, a mash-up of a landscape and a portrait of an Inuit man, was enough to earn him the title of the “Official Artist of the Iditarod.” Van Zyle has now completed dozens of posters and other artworks for the race, which have become collector’s items in their own right, often featuring sled dogs and mushers in action, always with Alaska in the backdrop. His work also earned him a place in the Iditarod Hall of Fame. To mark the Iditarod’s 50th anniversary, he created a limited edition poster blending a race scene with the likeness of Iditarod cofounder Joe Redington, Sr.

“Growing up, my mom had kennels, so I’ve been around sled dogs for most of my life and had been sledding long before the Iditarod,” he says. “I paint what I know, and what I know is Alaska.”

Recently, Van Zyle partnered with another icon within the dog racing community: Jeff Schultz. As the “Official Photographer of the Iditarod,” Schultz has been documenting the race from start to finish since 1981.

“I was still in my 20s and could only afford to hire a pilot to take me to the race’s halfway point,” Schultz says. “I donated my photos to the committee and they came back and asked me to do it again next year, [this time providing me with adequate transportation]. It was a handshake deal.”

Over his decades-long career, Schultz’s photographs have become synonymous with Alaska. In 1990, he founded the state’s largest stock photo agency, Alaska Stock Images, and his work has been featured in everything from the pages of Outside magazine to Wells Fargo ad campaigns.

For most people, their only experience with the Iditarod is through Van Zyle’s paintings and Schultz’s photographs, and over the years the artists’ imagery, used to promote the event, has become as iconic as the sled dogs and the Alaska terrain that define the race. Many of their prints and posters have been featured in art galleries, and, as collector’s items, they sell at auction for hundreds of dollars.

“I’ve had people write letters to me saying that they learned about the Iditarod because of me,” Schultz says. “I’ve heard from people who were kids when they first saw my images, and now they race in the Iditarod.”

Last year, the creative pair published a book, co-written by their wives, Jona Van Zyle and Joan Schultz, who are also actively involved in the dogsled community. Double Vision Alaska contains more than 120 photographs and paintings, including a collaborative series in which Van Zyle applies acrylic paint to Schultz’s photos. The painter, for example, added mushers, dog teams and cabins to a snowy sunset scene photographed by Schultz. In another, he painted a red Cessna Skywagon over a photo of rugged snowy peaks.

In their combined 87 years with the Iditarod, Van Zyle and Schultz have had a front-row seat, witnessing the race’s evolution and growth firsthand.

“The race has changed 5,000 percent,” Van Zyle says. “When I ran it in the early years, it took us 25 to 30 days to finish. Back then mushers would cut spruce boughs for the dogs to rest on to get off the snow, but now there’s straw flown into every checkpoint. Of course, the clothing has changed, and then you have better communication systems with tracking devices on the sleds, and the trail is now an actual trail instead of snowshoeing in front of our dogs all day long. At one time, there was one pilot who flew supplies in, but that was only if he got there. The rest was catch-as-catch-can.”

And yet, one thing has remained the same: that sense of adventure felt not only by the mushers and their dogs, but by anyone experiencing the event, from spectators on the sidelines in villages across Alaska to readers of the artists’ new book hundreds of miles away.

“I’ve been on the Iditarod trail for over 40 years and it’s a total adventure that can last a lifetime,” Schultz says. “I love being between checkpoints, when it’s just the dog team and the landscape, and the only thing you hear is the panting of the dogs. That aspect of it is phenomenal. You get to travel through small, Native villages where everyone comes out to greet the mushers, and the dogs. On the trail, you get to experience this glory each day for ten days straight. It’s a letdown once you do get to Nome.”