Sometimes, the calendar conspires to combine seemingly disparate holidays together into one amalgamation of celebration. In 2013, the world watched as Thanksgiving and Hanukkah fell on the same day, leading to to the birth of the menurkey (turkey-menorah). 2015 presents a similar—though decidedly less rare—situation, as Valentine's Day and President's Day fall a mere 48 hours apart.

You could celebrate the long weekend of romance and presidential history by giving your Valentine a card with your favorite president on it, but why not take things a step further by visiting a location where the fires of presidential romance once burned bright. Here are five locations, from first kisses to honeymoons, where presidents and their first ladies made some romantic memories.

Who: Lyndon and Lady Bird Johnson

Lyndon Johnson might have had a dinner date with another woman later that evening, but that didn't stop him from asking Claudia Alta Taylor, known as "Lady Bird," to get breakfast with him the next day at the Driskill Hotel in Austin, Texas. It was September 1934, and Johnson, then an aide for Texas congressman Richard Kleberg, was a 26-year-old cultivating a love for politics. Lady Bird was 22, and, having just graduated from the University of Texas, was considering the next step in her life: The daughter of a respected Texas businessman, she was looking for something beyond the Lone Star State, and considering teaching positions in Hawaii or Alaska.

The two met in the office of a mutual friend, and agreed to meet for a meal the next day. Breakfast turned into a day-long date, and Johnson proposed at the end of it. Lady Bird didn't immediately accept, but the two began a passionate courtship filled with love letters sent back and forth between Washington and Texas. "Knowing you has been one of my greatest pleasures," Johnson wrote in one of his first letters to Lady Bird. "You know, I think, that you mean everything to me. I hope I may mean equally as much to you." After just two and a half months, the couple married in San Antonio. They remained married for 39 years, until Johnson's death in 1973.

Today, the Driskill Hotel honors the location of the Johnsons' first date with a dedicated Lyndon and Lady Bird Johnson Suite, decorated with linens and art inspired by Texas wildflowers, which Lady Bird was reported to love. The Driskill Grill, where the Johnsons first ate breakfast together, is still operating, and is considered one of the top 25 hotel restaurants in the country, according to Zagat.

Who: Barack and Michelle Obama

Barack Obama had to exercise patience and tenacity when convincing Michelle Robinson to go on a date with him. Obama had taken a summer position as an associate with the Chicago law firm Sidley & Austin, and Robinson was assigned to be his adviser. "I remember being struck by how tall and beautiful she was," Obama later wrote in O, The Oprah Magazine. "She, I have since learned, was pleasantly surprised to see that my nose and ears weren't quite as enormous as they looked in the photo I'd submitted for the firm directory."

For weeks, Obama pursued Robinson, asking her to go out with him. But Robinson resisted: since they worked together—and she was his adviser—she didn't think a relationship was appropriate. It wasn't until Obama threatened to quit his job that Robinson relented.

The pair's first date lasted an entire day, from a trip to the Art Institute of Chicago—where they had lunch in the courtyard—to a movie (Spike Lee's Do The Right Thing). As the day wound down, Obama took Robinson to get ice cream in Chicago's Hyde Park neighborhood. "On our first date, I treated her to the finest ice cream Baskin-Robbins had to offer, our dinner table doubling as the curb," Obama wrote in O. "I kissed her, and it tasted like chocolate."

The two were married on October 18, 1992. Though the Baskin-Robbins in Hyde Park has been replaced (it's now a Subway), the spot of their first kiss—on the corner of Dorchester Avenue and 53rd Street—has been memorialized with a plaque. 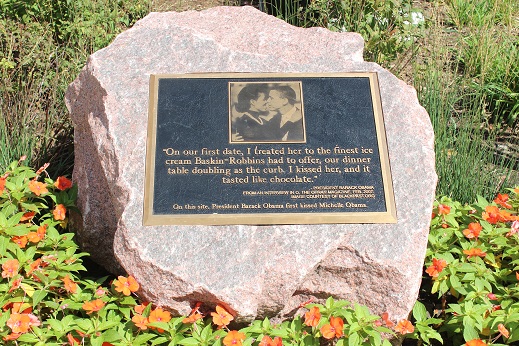 John F. Kennedy was a young congressman from Massachusetts when he met Jacqueline Bouvier, who was working as the "Inquiring Camera Girl" with the Washington Times-Herald newspaper. Bouvier was charged with wandering the city capturing photographs and quotes of Washingtonians going about their daily business.

The pair met at a dinner party in Georgetown, and dated for two years. Rumors about the exact location of Kennedy's proposal abound: some claim he did it over the phone, via telegram or in the Omni Parker Hotel in Boston. But one Washington, D.C. restaurant claims to have the very booth where Kennedy popped the question—and the support of the Kennedys to back their claim.

Located on the corner of Wisconsin Avenue and N St NW in Georgetown, Martin's Tavern has long claimed ownership of the Kennedy proposal. The restaurant, which has been open for over 75 years, has served "every president from Harry Truman to George W. Bush," according to the Washingtonian. Martin's was also a favorite of JFK's; he would often go to the restaurant on Sundays after attending mass at nearby Holy Trinity Church.

On Wednesday, June 24, 1953, Martin's Tavern was witness to another kind of political history: as Kennedy and Bouvier dined at Martin's (in booth number 3), the young senator proposed to Bouvier with a ring that featured both a 2.84-carat emerald and a 2.88-carat diamond.

The two were married on September 12, 1953 in Newport, Rhode Island. They remained married—despite Kennedy's rumored romantic liaisons—until his assassination on November 22, 1963.

The "proposal booth," as Martin's Tavern has dubbed the space, is still in existence, and remains a popular location for dinner with a side of a diamond ring.

Who: Ronald and Nancy Reagan

When Nancy Davis first called up Ronald Reagan, in 1951, it wasn't to find a date. Reagan was president of the Screen Actors Guild, and Davis wanted to know if he could help her get her name taken off of a list of possible communist sympathizers in Hollywood. But even if Davis' real intention was to clear her name, she didn't fail to note that Reagan was handsome, powerful and newly single, having recently divorced his first wife. "I had seen some of his pictures, and, on screen, at least, he seemed nice and good-looking ..." she later wrote in her autobiography My Turn: The Memoirs of Nancy Reagan, "someone I thought I'd like to meet."

Reagan offered to meet Davis for dinner to discuss the matter. He took the young actress to LaRue, which Nancy remembers in her memoir as being one of the best restaurants on the Sunset Strip—the place to see and be seen in Hollywood at the time. Over dinner, Reagan suggested that if Nancy wanted to clear her name, she should just change it (the blacklist was actually targeting another actress named Nancy Davis). "I had known Ronald Reagan only ten minutes when he suggested I change my name," she wrote. "More than two years later, when we came back to this topic, I would be all too happy to change my name—to his."

That dinner lead to more dinners, which lead to a nearly two-year romance. The pair were married in what Nancy remembers as a simple ceremony on March 4, 1952, at the Little Brown Church in the Valley. No family or press were told about the ceremony—there were only two witnesses, the matron of honor and the best man.

Ronald and Nancy Reagan were married until his death in 2004—in their later years, after Ronald was diagnosed with Alzheimer's, Nancy became his primary caretaker. Throughout their time as First Family, Nancy and Ronald presented the image of a couple deeply in love, constantly holding hands or gazing lovingly at each other. On their 31st anniversary, President Reagan sent Nancy the following love letter: "I more than love you, I’m not whole without you. You are life itself to me. When you are gone I’m waiting for you to return so I can start living again."

The Little Brown Church in the Valley is still operational, holding both religious services and wedding ceremonies.

Who: Woodrow and Edith Wilson

When President Woodrow Wilson's first wife Ellen Axson Wilson died during the second year of his presidency, Wilson was devastated. He would soon find another love, though, with Edith Bolling Galt, a wealthy widow from Washington high society. The two met at the White House through Wilson's cousin, who happened to be a friend of Edith's. Their courtship was brief, lasting only nine months before the two were married in Edith's house in Washington on December 18, 1915.

Wilson appears to have been completely smitten with Edith, writing her love letters that boldly proclaimed his affections. "My precious Darling," he wrote to her in October 1915, "The more we are together the more I love you, the more I need to have you always with me, and the more inadequate written words become to speak my heart to you—the more impatient I grow of the pen, the more eager to whisper the love that floods my heart into my Darling's lips as I hold her close in my arms. And yet the more necessary does it become to relieve my heart with some message of love, even if it be only written."

The press did not take to the union kindly; they felt that Wilson was besmirching the memory of his first wife by remarrying so quickly. One newspaper even ran a story claiming that Edith, 15 years younger than Wilson, had contributed to Ellen's death.

After marrying, the two dashed off for a quick—and secret—honeymoon, in Hot Springs, Virginia, and White Sulphur Springs, West Virginia. (A piece on The Awl suggests that Wilson chose a simple honeymoon to quell gossip about his marriage to Galt.) They remained in Hot Springs for two weeks, lodging at the Homestead Resort, before moving to The Greenbriar in White Sulphur Springs.

The two remained married throughout the rest of Wilson's time as president, and until his death three years after leaving office.

Both the Homestead Resort and The Greenbriar are still fully operational. In 2014, both were named one of the Best Resorts in the South in the Condé Nast Traveler's Reader's Choice Awards.