The Bay of Fundy in Nova Scotia is famous for its tides. One of the seven wonders of North America, they reach a record height of 50 feet. For photographer Mark Marchesi, the phenomenon is like the “whole ocean is breathing in and out.”

“It's really like that,” he says. “There's no time between high and low tide. It comes in and then it goes right out to the point where it's just like constantly changing the landscape and the intertidal zone.”

The photographer, whose new book, Evangeline: A Modern Tale of Acadia is out this month, grew up in Rye, New York, a peninsula surrounded by coastline. The tides of his childhood weren’t as massive as the Bay of Fundy’s, but the smell of the mud and salt marshes of low tide stuck with him and followed him into adulthood.

Today, he lives in his now-adopted home of Portland, Maine, another peninsula, this time surrounded by the Casco Bay. But he never got to explore Nova Scotia’s famous tides until he received the Marchesi Maine College of Art’s residency in the eastern Canada Maritime province in 2012. By happenstance, when Marchesi found out he’d been awarded the fellowship, he had been researching one of Portland’s most iconic citizens, Henry Wadsworth Longfellow. While browsing through the poet’s collective works for a separate photo project, he came across what remains one of the most famous tales of Nova Scotia, Longfellow’s “Evangeline: A Tale of Acadie.”

“It kind of was serendipitous moment,” he says. “I discovered ‘Evangeline’ while trying to figure out what I was going to shoot up in Nova Scotia, and it kind of snowballed from there.”

Published in 1847, Longfellow's sprawling epic tells the story of an Acadian woman’s desperate attempt to be reunited with her fiance after being separated from him on their wedding day. It’s a story drenched in sorrow and staunch-heartedness, superimposed over Le Grand Dérangement—how the Acadian people refer to their forced deportation by British troops from Acadia, present-day Nova Scotia, New Brunswick and Prince Edward Island. The reason for the exile of an estimated 9,000 Acadians had to do with the Seven Years War, or the French and Indian War, as the North American theater was called.

In 1710, the British wrested control over Acadia (named after the indigenous word aquoddie, which refers to a salt-water fish of the cod family) from the French, whose peasants had first settled there in the early 17th century, living alongside the indigenous Mi'kmaq people. But despite becoming subjects of the British, when the French and Indian War began in 1754, some Acadians refused to sign unconditional oaths of allegiance to Britain and some maintained supply lines for the French. In response, the British unilaterally forced the Acadians to leave their homes, sending them to the American Colonies, England and France for the duration of the war. Some attempted to return only to find their houses and lands occupied.

Less than a century later, the Acadian peoples' deportation had become almost a historical footnote when Nathaniel Hawthorne brought a reverend by the name of Horace Conolly along to pay a visit to his old college friend, Longfellow. As the story goes, during their stay, Conolly shared a tale that one of his parishioners had told him about the Acadians, in hopes that Hawthorne might decide to use it in a future story. Hawthorne didn’t, but Longfellow did, and "Evangeline" would go on to become one of the poet's most well-known works.

Despite the richness of detail embedded into his classic tale, Longfellow himself never traveled to Nova Scotia, relying instead on his own research at the Harvard Library and Massachusetts Historical Society. His resulting epic poem resurfaced the Acadians plight, but also reshaped their popular history into a simplified and, critics claim, overly romanticized narrative that downplayed the historical complexities of the time (as the controversial Canadian historian Édouard Richard wrote in 1896 in his book, Acadia: Missing Links of a Lost Chapter in American History, "The name (Acadia), with the lying legend of British cruelty connected with it, has been embalmed, not in amber, but in barley-sugar, by the author of 'Evangeline.'"). Beyond politics, it also imbued the physical setting of Acadia with extra glamor. But that was the point, as The New York Times reported in 1892, "He [Longfellow] kept away from it, it is said, for fear that having the idea picture in his mind, the reality might dissipate it."

In his new photobook, Marchesi says he, too, set out to capture the narrative fiction of Longfellow's 'Evangeline'-land. Unlike the poet though, the photographer spent four years wandering through the province, searching for the perfect images to re-imagine the classic tale. He speaks with Smithsonian.com about the experience: 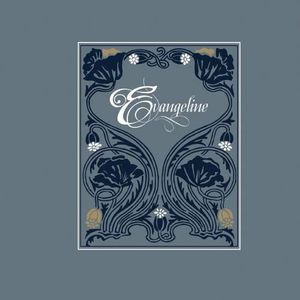 Evangeline: A Modern Tale of Acadia

How does poetry inform your photography?

Literature is very inspiring to me, especially very descriptive types of writing. So Longfellow's "Evangeline," especially the first part of it, just has a lot of these really vivid and rich descriptions of the landscape. Whenever I read stuff like that I get these really intense visual pictures in my head and it drives me to want to capture that on film.

Where there specific lines in his poetry that especially stuck with you?

Let me see if I can remember it right:

"Where is the thatch-roofed village, the home of Acadian farmers,—
Men whose lives glided on like rivers that water the woodlands,
Darkened by shadows of earth, but reflecting an image of heaven?
Waste are those pleasant farms, and the farmers forever departed!"

Things like that. Where you're getting a visual sense of the area, the architecture the landscape, but also the feeling I was going for, the emptiness and kind of an exodus. Even the first line: "This is the forest primeval." There are specific passages that I was really trying to illustrate in addition to going for an overall sentiment and narrative.

Longfellow takes some creative licenses when telling the story of the Acadians' deportation. Were you looking to tell the story through Longfellow's eyes or did you also want to capture the discrepancies in the story?

I wasn't exactly looking to tell a true story about the Acadians. I was really going for a fictional narrative in the same way he did. There's discrepancies, there's creative license he takes where he didn't tell the story exactly how it happened. And that's kind of the same thing I did. I was loosely basing my narrative on his, which doesn't necessarily visit or tell real true events. That's more what I was trying to do, kind of a fictional narrative.

Paging through Evangeline, there's such an overwhelming sense of sadness, emptiness, and desertion. How did you go about capturing these emotions. Did you just wander around Nova Scotia? Or did you have particular places in mind?

Yeah, I wandered around a lot. I drove and drove and drove. Nova Scotia is big. This project covers not the entire province, but a pretty large part of it. So I was just driving all over. Mostly day trips, sometimes an overnight from where we were staying. Just following random roads not really knowing where they would lead. I was just trying to find whatever I could that would bring the things that I was thinking about and reading, the passages that were in my head, to life.

During this project did you talk to a lot of locals or did you keep yourself removed?

A little bit of both. I tend to keep to myself and shy away from people more or less when I'm photographing. I did connect with some people especially because I went up four years in a row. The first year I definitely kept to myself. Then the second year I started meeting some more locals. And then the third year I was actually more proactive about trying to connect with some people because I wanted people to know what I was doing and get some feedback. Also, I wanted to make connections as a way of getting access to more places.

Can we talk about the religious elements in these photos. How intentional were they?

That was very intentional. It's unmistakable when you're out there that faith is a big part of the culture. Likewise, in Longfellow's poem, there's a lot of that. The first part takes place in a church, so there's references to the priest and the church in the poem. In real life, faith is a big part of the Acadian culture, so I needed to include some church scenes and did that very purposefully.

Did you ever think of seeking out a real-life Evangeline and Gabriel?

I went back and forth about that a lot. I did photograph a handful of people. Mostly my portraits are people I naturally came across. I hadn't come across an Evangeline, but some of portraits I have I was able to place the people that I found and met with the characters in the book. The father of Gabriel was one of the people that I thought I might have captured. So I started thinking, should I try to find a Gabriel and an Evangeline? But it just seemed too forced to me, and I just decided that leaving it landscapes-only with no people was more powerful.

Longfellow never visited Nova Scotia himself. What was it like to be able to photograph the real-life setting?

It was exciting. The fact that he had never been there to me was amazing. He was able to describe some of these areas so perfectly. Even 150 years or so later, some of the places that he was describing are exactly how he described them, even though he'd never been there. So that was amazing to me. Being able to experience those places and put them on film was super exciting. That's kind of what drove the whole project, that sense of discovery and the excitement.

The project I have ongoing—which was going before this one and is still going—is photographing the changing cityscape of Portland. ME. Portland is evolving very quickly, so there's so much to photograph and so little time, basically. You can't imagine how quickly things are disappearing and new things are being built.

Speaking about cityscapes, they seem to be a constant theme in your work. What do you think it is about them that draw your eye and lens?

Finding different vantage points and using the structures and the way the land is shaped to build compositions is just like a never-ending visual game for me. That's what I love about it.

But also, the way that architecture is unique to different areas. A really big, unexpected thing when I got to Nova Scotia was how beautiful and unique its style of architecture is. Very Victorian and gothic style. Very pronounced. Weathered wood and things like that, which I love because all of that tells a story about the people and about the climate and all kinds of different things that you can read just from the buildings, themselves. I tend to look at buildings almost as people, as characters. I think more about my photographs of buildings as portraits, actually, trying to capture the character of them. Each one tells a story and has a history and a personality.