To capture democracy in America, photographer Ryan Donnell tracks down polls in surprising locations across the country 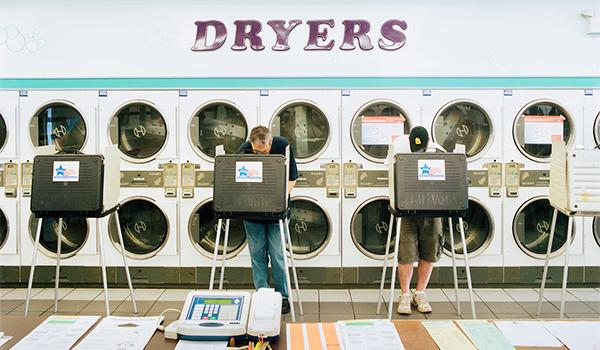 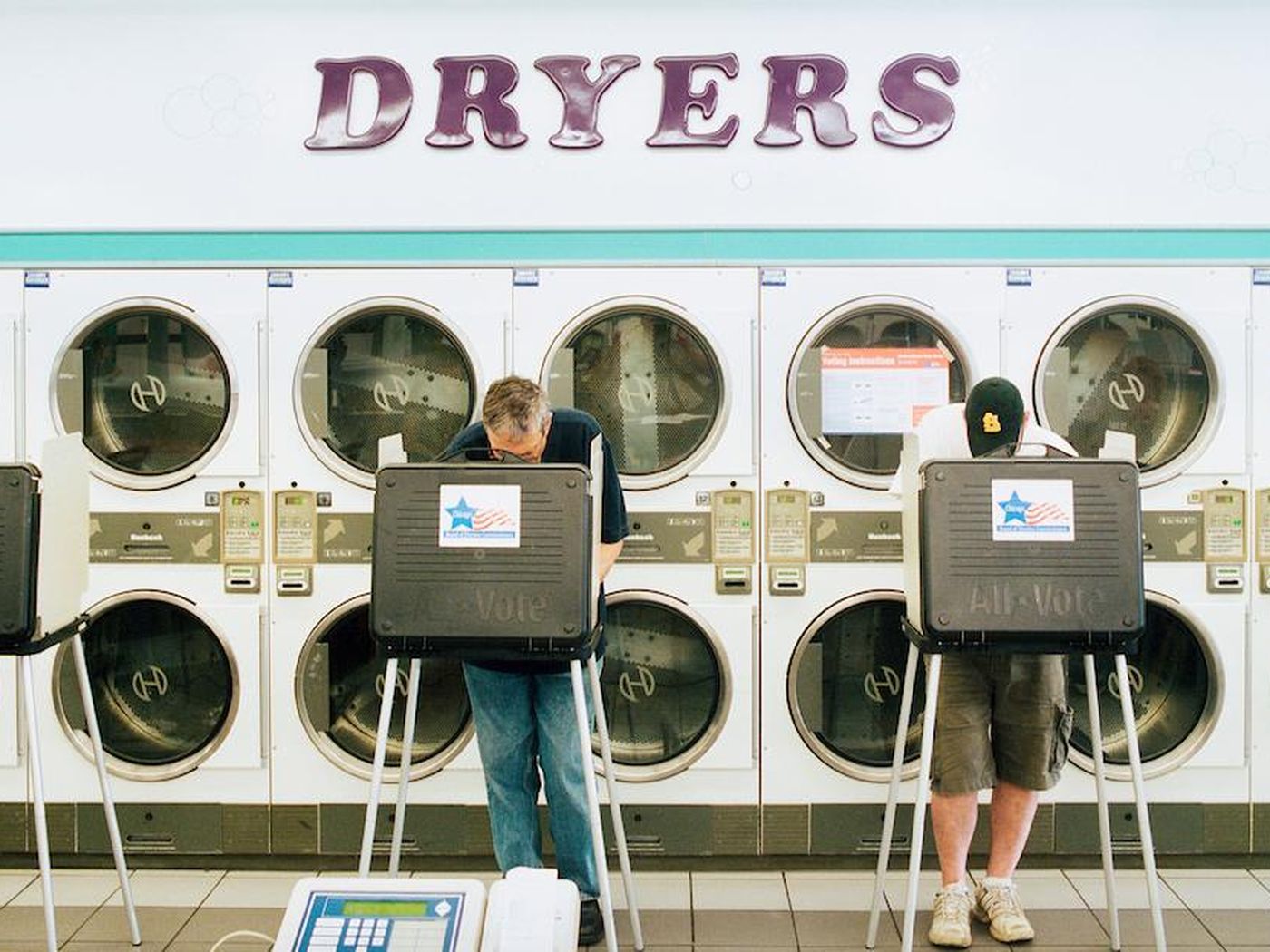 Most people probably wouldn’t expect to cast their vote in a museum full of boisterous Mardi Gras-like costumes. But for anyone who lives within a three-minute walk of the Mummers Museum in South Philadelphia, in the city’s Ward 2 Division 1, that is where they will be headed to vote this Election Day.

The Mummers Museum, a 44-year-old homage to the oldest continuous folk parade in the United States, is one of the 61 polling places Ryan Donnell has documented since 2008 in his quest to photograph the most unusual polling places in America. The ongoing project, which the D.C.-based photographer embarked on in 2008, attempts to capture the process of voting in America and, in doing so, offer a view into how democracy plays out in specific regions.

The polling places Donnell photographs may not match the conventional idea of a polling place, the vast majority of which are schools, community centers and churches. However, they all conform to the overarching federal and state government requirements for polling places, such as accessibility for disabled people, as well as numerous restrictions on the local level, the main arbiter of polling place locations, that vary from locality to locality. These factors include parking space, square footage of the premises and distance between voting machines, the latter two a new priority in many areas due to the ongoing pandemic.

As Robert Stein, political scientist and professor at Rice University explains, the county clerks or other designated officials who choose the locations of the polling places have unofficial considerations as well, such as whether people feel safe voting in an area and how central the area is to the local community.

“People sometimes don’t necessarily vote where they live because when you get up in the morning, where’s the first place you go? To work, to school, to shop, to drop the kids off,” Stein says of early in-person voting, an option for voters in most states this election cycle. “And it may be that the more convenient location isn’t nearest to your house, but a large supermarket with lots of parking, 50 voting machines and one that you can easily access off the freeway.”

Each of the unusual polling places featured below will be in use in the upcoming 2020 presidential election.

The Mummers Parade is an icon of Philadelphia culture and officially dates back to 1901, though locals have engaged in “Mummery”—gallivanting around town in costumes and poking fun—on New Year’s Day since the 17th century. The museum—which has been used as a polling place for many years—commemorates the time-honored tradition. “It's a weird tradition,” says Donnell, who lived in Philadelphia for almost a decade. “So the fact that they have a polling center inside the Mummers Museum is very uniquely Philadelphia.”

In the late 19th century, Iowa used to have about 14,000 one-room schoolhouses, the most of any state in the U.S. While many of those that are still standing, like Forest Grove School No. 5 and North River Stone Schoolhouse, are now historical sites, this 130-year-old one on a grassy plot surrounded by farmland and wind turbines about an hour’s drive from Des Moines is still serving out its civic duty—now in a different capacity. “I was standing on top of my car so I was kind of a curiosity,” Donnell says. “But as a photographer, you’re used to being a curiosity waiting for things.”

Lawn Lanes is located in West Lawn, an area on the southwest side of Chicago known for its diversity. The bowling alley has served as a polling place for at least 12 years and is the designated polling place for about 750 voters in 2020. Lawn Lanes' manager David Supanich says his father, who previously ran the establishment, agreed to offer the site as a polling place after the local ward office decided to look for a new location to decrease Election Day congestion in the area. Unusual polling places like this bowling alley are typically employed if an area doesn’t have enough public buildings that fulfill the requirements. The placement of the voting machines in a separate room of the bowling alley made capturing both the polling booths and the bowling equipment a challenge for Donnell.

Donnell frequented this Vietnamese restaurant situated in the heart of Philadelphia’s Little Saigon when he used to live nearby. The restaurant serves as the polling place for residents of the neighborhood and features a large stage for community events ranging from birthdays to weddings. “It’s just a wonderful look at the diversity of the city,” Donnell says. “I felt like for [Saigon Maxim] it was really important to get a sense of the vastness of the restaurant because those Vietnamese restaurants and Chinese restaurants are often so big, they're like community centers, essentially.”

Ray Lounsberry has opened up his agricultural garage to voters for almost two decades. A county auditor asked to use his garage because the previous polling place was too cold, deterring voters from coming to cast their ballots. The World War II veteran, just a few years shy of his 100th birthday, has regularly helped poll workers set up the area in preparation for the hundreds of voters assigned to his precinct, Nevada Township, by setting up chairs and bringing refreshments for the workers. “I feel like I’m doing a service to the county by letting them use this,” Lounsberry told Dan Mika of the Nevada Journal. “I don’t mind at all.”

“[The Su Nueva Laundromat] is probably the most popular one because I think it's just the weirdest shot, you know, with the dryers and stuff like that,” Donnell says. “Again, it just shows this diversity and this wonderful multi-ethnicity aspect to American voting.” Su Nueva, a 10-minute walk from Lawn Lanes, is also located in West Lawn and is the official polling place for about 700 registered voters. Since he photographed the place in 2012, Donnell has noticed that now every election cycle, the spot will pop up in local coverage of Chicago polling places. Donnell noted that the man in the St. Louis Cardinals cap is like an homage to his hometown of St. Louis, Missouri.

The laboratory, a sprawling brick building that far outsizes surrounding abodes, is used to test the quality of the city’s drinking water, among other water purity tests. Because there was nothing that obviously indicated near the voting machines that the polling place was a laboratory, Donnell recalls waiting for an hour or two for someone in a lab coat to walk into his six-by-six frame to show the scientific nature of the location. Stein says research has shown that the physical building where voting takes place can influence voters’ choice of candidate and their stances on issues, even if identifying iconography is covered.

While many restaurants and other small businesses that volunteer as polling places will shut down for Election Day, the ongoing billiards game on the left of the photograph is evidence that Pressure Billiards and Café, located in Edgewater, Chicago, kept business going alongside voting. The venue, which has been a polling place since at least 2012, however, still sees less business on Election Day as regulars know that fewer tables will be open. Commercial establishments like this one that serve as polling places are often compensated with a small fee—in 2015, Chicago vendors were offered $150 at minimum.