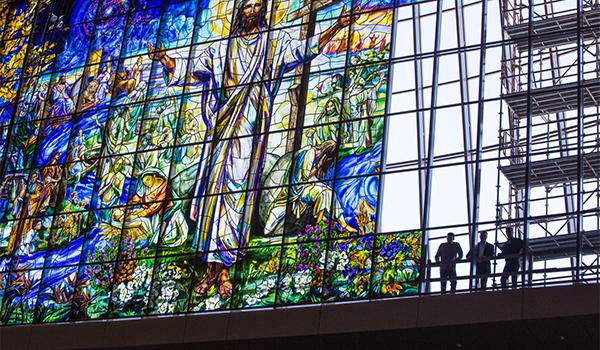 A behind-the-scenes look at the installation of a massive piece of stained glass art inside the Church of the Resurrection in Leawood, Kansas. Courtesy of Judson Studios

For more than a century, Judson Studios in Los Angeles has been creating striking artworks made of stained glass. Founded in 1897, the business, which holds the title of the oldest family-run stained glass studio in the United States, is responsible for producing a wealth of recognizable glass pieces found throughout the country and world.

Now, nearly 125 years since its founding, Judson Studios is teaming up with another century-old California institution, the Forest Lawn Museum in nearby Glendale, to present a one-of-a-kind exhibition that focuses on the studio’s colorful history.

Titled “Judson Studios: Stained Glass from Gothic to Street Style,” the show dives into the studio’s extensive archives and features nearly 100 original stained glass artworks, drawings, watercolors and archival photographs, as well as a number of collaborations with contemporary artists using traditional stained glass methods. Additionally, many of the pieces will be on display to the public for the first time ever. The exhibit follows on the heels of a new book focused on the studio’s history and projects called Judson: Innovation in Stained Glass, co-authored by the studio’s president David Judson and L.A.-based writer Steffie Nelson.

To truly understand Judson Studios’ impact on the stained glass world, one must first take a look at its history. At the age of 51, painter William Lees Judson, suffering from poor health, moved his family from Chicago to Los Angeles in search of fresh air and quickly immersed himself in the city’s burgeoning art scene, serving as dean of the University of Southern California’s College of Fine Arts as well as one of the co-founders of the Arroyo Guild of Fellow Craftsmen. Becoming a glass artist was never in his game plan, especially so late in his career, but Judson and his three sons founded Judson Studios in 1897. Before long the studio had built a reputation for its refined craftsmanship and high-quality glass pieces.

“He struggled as an artist, especially after his wife died in childbirth and he was left to raise seven children on his own,” says David Judson, the studio’s current president and a fifth-generation descendant of the founder. “He thought that creating a stained glass studio would be a way for him to continue being involved in the creative arts community, while also having the stability of a business.”

Soon glass designs by the studio began popping up inside churches and commercial buildings throughout the greater Los Angeles area, including the glass rotunda inside the Natural History Museum of Los Angeles County and All Saints Church in Pasadena, where Judson Studios’ pieces are displayed alongside windows produced by fellow well-known glass studio, Tiffany. Judson Studios wasn't alone in making stained glass a common sight in cathedrals and other buildings across the United States. Other glassmaking studios, such as John LaFarge in New York City and Columbia Stained Glass Co. in Milwaukee, were also well known for their craftsmanship. However, Judson Studios is one of the few remaining studios from that era and a testament to the importance of nurturing the art of craft.

In an article published in Angelus.com, James Fishburne, director and exhibition curator at Forest Lawn Museum, says, “David Judson is able at the same time to preserve the tradition and also to innovate, evolve and stretch. From the beginning, the studio could do the most traditional Gothic, lithurgical style. In the '20s and '30s, they did stained glass in the arts and crafts style.... They collaborated with Frank Lloyd Wright. They did 2,000 panels [at] the Air Force Academy Cadet Chapel.... Today, they're working with street muralists and conceptual artists.”

Those artists include street artist David Flores who is known for creating murals that combine Pop Art with stained glass, Miles "EL MAC" MacGregor who specializes in graffiti and painting with acrylics, and artist Jane Brucker whose collection of repurposed wooden chairs features stained glass panels. The show fills two galleries at Forest Lawn and includes Medieval and Renaissance stained glass windows built into the museum's walls that date back to between the 12th and 16th centuries.

“Even though we use traditional techniques, we also use contemporary methods,” says Judson. “It’s a meeting of these two worlds coming together, and working with a medium that feels authentic and long lasting.”

One of the earliest known examples of stained glass dates back to 686 A.D. and can be found inside St. Paul’s Monastery in Jarrow, England, according to The Stained Glass Association of America. The practice of making colored glass crosses cultures and continents, with examples dating back to the Medieval Europe and 10th century Arabia. Artists today use much of the same techniques as those applied thousands of years ago; making stained glass involves firing sand in a kiln until it liquifies and adding powdered metals to make different colors. The mixture is then cooled to form glass sheets that artists place together in mosaic patterns to create different imagery.

Judson equates much of the studio's success to its ability to adapt to change, combining age-old production techniques with new technological advancements, such as using computer software to create customized patterns designed specifically for different spaces. Another example is a technique called fusing, in which artists paint on glass using an array of different colors and then fire the piece in a kiln to fuse the colors into a single piece of art.

“We’re the first major studio in the world to embrace fusing into large-scale projects,” Judson says. “We think that fusing is the future of what stained glass will become.”

And that future is looking kaleidoscopically bright. “We’ve seen a resurgence of craft making and building things by hand over the past few years,” Judson says. “I’m excited to see where stained glass goes over the next 100 years.”

Seven Stunning Examples of Stained Glass Art in the United States, According to David Judson