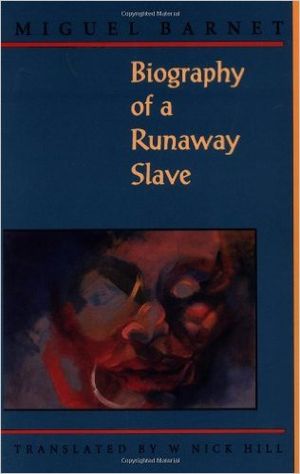 Biography of a Runaway Slave

The essay below is excerpted from "Biography of a Runaway Slave" by Miguel Barnet, translated by W. Nick Hill, 1994. Esteban Montejo was born a slave in 1860 and raised on a Cuban sugar plantation. He eventually escaped and lived as a fugitive until around 1886, when slavery was abolished in Cuba. In 1963, when Montejo was 103 years old, Cuban ethnographer and poet Miguel Barnet conducted a series of interviews with him that Barnet later crafted into a first-person account.

Runaways, there weren’t many. People were afraid of the woods. They said that if some slaves escaped, they would be caught anyway. But for me that idea went around in my head more than any other. I always had the fantasy that I would enjoy being in the forest. And I knew that working in the fields was like living in hell. You couldn’t do anything on your own. Everything depended on the master’s orders.

One day I began to watch the overseer. I had already been studying him. That dog got stuck in my eyes, and I couldn’t get him out. I think he was a Spaniard. I remember that he was tall and never took his hat off. All the blacks had respect for him because one of the whippings he gave could strip the skin off of just about anybody. The thing is, one day I was riled up, and I don’t know what got into me, but I was mad, and just seeing him set me off.

I whistled at him from a distance, and he looked around and then turned his back. That’s when I picked up a rock and threw it at his head. I know it hit him because he shouted for someone to grab me. But he never saw me again because that day I made it into the woods.

I traveled many days without any clear direction. I was sort of lost. I had never left the plantation. I walked uphill and downhill, all around. I know I got to a farm near Siguanea, where I had no choice but to camp. My feet were full of blisters and my hands were swollen. I camped under a tree. I stayed there no more than four or five days. All I had to do was hear the first human voice close by, and I would take off fast. It would have been real shitty if you got caught right after escaping.

I came to hide in a cave for a time. I lived there for a year and a half. I went in there thinking I would have to walk less and because the pigs from around the farms, the plots, and the small landholdings used to come to a kind of swamp just outside the mouth of the cave. They went to take a bath and wallow around. I caught them easy enough because big bunches of them came. Every week I had a pig. That cave was very big and dark like the mouth of the wolf. It was called Guajabán. It was near the town of Remedios. It was dangerous because it had no way out. You had to go in through the entrance and leave by the entrance. My curiosity really poked me to find a way out. But I preferred to remain in the mouth of the cave on account of the snakes. The majases [large Cuban boa constrictors] are very dangerous beasts. They are found in caves and in the woods. Their breath can’t be felt, but they knock people down with it, and then they put people to sleep to suck out their blood. That’s why I always stayed alert and lit a fire to scare them away. If you fall asleep in a cave, be ready for the wake. I didn’t want to see a majá, not even from a distance. The Congos, and this is true, told me that those snakes lived more than a thousand years. And as they approached two thousand, they became serpents again, and they would return to the ocean to live like any other fish.

Inside, the cave was like a house. A little darker, naturally. Oh, and dung, yes, the smell of bat dung. I walked on it because it was as soft as a mattress. The bats led a life of freedom in the caves. They were and are the masters of them. All over the world it’s like that. Since no one kills them, they live a long time. Not as long as the snakes, for sure. The dung they drop works afterward as fertilizer. It becomes dust, and it’s thrown on the ground to make pasture for animals and to fertilize crops.

One time that place nearly burned up. I lit a fire, and it spread all through the cave. The bat shit was to blame. After slavery I told the story to a Congo. The story that I had lived with the bats, and that joker, they could sometimes be more jokers than you might imagine, he said: “Listen here, boy, you know nothin’. In my country that thing what you call a bat is big like a pigeon.” I knew that was a tall tale. They fooled nearly everyone with those stories. But I heard it, and smiled inside.

The cave was quiet. The only sound always there was the bats going: “Chwee, chwee, chwee.” They didn’t know how to sing. But they talked to each other and understood each other. I saw that one would say “Chewy, chewy, chewy,” and the bunch would go wherever he went. They were very united about things. Bats have no wings. They’re nothing but a cloth with a little black head, very dirty, and if you get up real close, you’ll see they look like rats. In the cave I was summering, you might say. What I really liked was the woods, and after a year and a half I left that darkness behind. I took to the footpaths. I went into the woods in Siguanea again. I spent a long time there. I took care of myself like a spoiled child. I didn’t want to be chained to slavery again.