1968: The Year That Shattered America

In January 1968, Maharishi Mahesh Yogi invited me to a Transcendental Meditation course in Rishikesh, a city in the foothills of the Himalayas in Northern India. Back then, a lot of Americans still thought meditation was pretty far out. But in California, where I came from, it wasn’t such a stretch, particularly among musicians.

Maharishi had taught me how to meditate in Paris, after my band, the Beach Boys, performed in a Unicef benefit show there. My cousins Dennis and Carl Wilson and our bandmate Al Jardine all learned together, along with our wives. That first meditation was the most powerful thing I’d ever experienced. I used the mantra Maharishi had given me, and my mind immediately settled down into a silent, expanded state. I was more deeply relaxed than I’d ever been in my whole life. I said to myself, “Wow, this is so simple that anyone could do it. And if everyone did, it would be an entirely different world!”

So when Maharishi invited me to Rishikesh a few weeks later, I canceled everything on my calendar for the next couple of months. I had some really nice shirts and pants made in Beverly Hills. I figured if I was going to India, I should have some silk. Then I packed up a suitcase and flew on Pan Am—from Los Angeles to Hawaii, Hawaii to Japan, Japan to Bangkok, and Bangkok to Delhi. When I walked off the plane in Delhi, the sun was just rising and it was a beautiful, mystical morning.

On the road to Rishikesh, I was prepared to see cows and elephants. When a camel crossed in front of my taxi, that really surprised me. On the banks of the Ganges, someone showed up in a little scow, not even really a boat, and loaded me up with my luggage. Then I arrived at the ashram—or the International Academy of Meditation, as Maharishi called it.

Of course, once I got there and saw the Beatles, Donovan, Mia Farrow and the others, none of them were wearing silk outfits. They were all wearing plain little cotton pajama-type clothes they’d had made by the local tailors. So I had some of those simpler clothes made, too.

The area around us was called the Valley of the Saints, with the Himalayas rising up around it. In the epic The Ramayana, Lord Rama went there to do penance for killing the demon Ravana. Adi Shankara, the founder of the philosophy of non-dualism called Advaita Vedanta, built temples there in the eighth century. You could feel that this was a place where people had been coming to meditate since ancient times. When we went down to the Ganges before dawn, we saw yogis. It was February, and there were ice floes coming down the river. These yogis were doing their ablutions in the freezing cold water. That was truly impressive. 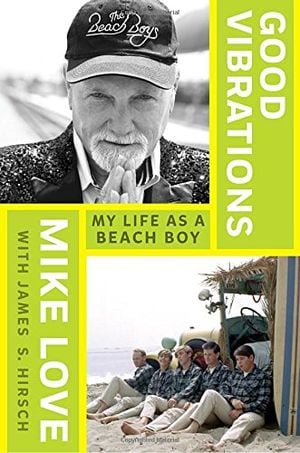 Good Vibrations: My Life as a Beach Boy

Mike Love tells the story of his legendary, raucous, and ultimately triumphant five-decade career as the front man of The Beach Boys, the most popular American band in history—timed to coincide with the 50th anniversary of "Good Vibrations."

Our campus was made up of low buildings and some little pointed cottages. I had a room in the same section as Paul McCartney. Mia’s sister, Prudence Farrow, was in between us. We meditated all morning and went to hear Maharishi talk about Vedic philosophy every afternoon and evening. In the lecture hall, he’d ask us, “How many people meditated for an hour? How many for two hours? How many for three hours?” The longest I ever meditated was about eight hours in a row. In Prudence’s case, it was several days. John Lennon wrote that song and sang it for her there: “Dear Prudence, won’t you come out to play?”

We ate breakfast outside, with lots of crows vying for our food. I was sitting there one day when Paul came to the table with his acoustic guitar, saying, “Hey, listen to this, Mike: ‘Flew in from Miami Beach B.O.A.C., didn’t get to bed last night...’” He was writing “Back in the U.S.S.R.” I told him, “You should sing about all the girls around the Soviet Union: the Ukraine girls, the Moscow girls, Georgia on my mind.”

We all had so much fun playing music for each other. For my birthday, the Beatles wrote a song called “Spiritual Regeneration” that ended with “Happy birthday, Michael Love.” It sounded just like the Beach Boys, the same rhythms, the same harmonies.

I had some amazing experiences in meditation during that course. The King James Bible says the kingdom of God is within you. The Bhagavad Gita says to experience inner silence and then plunge into activity. It’s really the same thing. In Rishikesh, I had a technique for seeking the kingdom of heaven inside myself.

There’s one meditation I especially remember, sitting one morning on the riverbank. I felt that I was looking down on the earth, and that it was a minuscule thing I happened to be sitting on. My lens was totally expanded. I wrote a poem about the experience that began like this:

In the air above the Ganges
A hundred fifty down miles from the source
of the Holy Mother River
Indian spiritual water
ripples seen 100 feet below
are shining in the sun
reflecting through the eyes of one
who feels as though
he’d been there, or nearly so
a long, long time ago

It’s been 50 years since that course, and meditation and yoga are more popular than they’ve ever been. I recently saw Hillary Clinton on TV doing pranayama—or “alternate nostril breathing,” as she called it. Meditation has become much more mainstream now. But if it’s helping people find out who they really are, I’m all for it. I feel blessed to have been there with Maharishi and the Beatles when it all began.

Bharat Sikka is a photographer based in India.

Mike Love is the singer and co-founder of the Beach Boys.